Selling fake horn in effort to save rhinos from poaching could have opposite effect, inventors warned

By NewsroomNovember 12, 2019Anti-poaching, Science and technology
No Comments

Scientists hoping to save the rhino from extinction have been warned they risk doing the opposite if they swamp the illegal market with a fake horn they have invented.

Researchers at the University of Oxford and a university in China have developed a substitute using cheap horse hair, which they say could drive down the price of real rhino horn.

The animal’s horn is in high demand, mostly in Vietnam and China, for use as a “traditional” Asian medicine – although it has no proven benefits – as well as ornamental carvings. 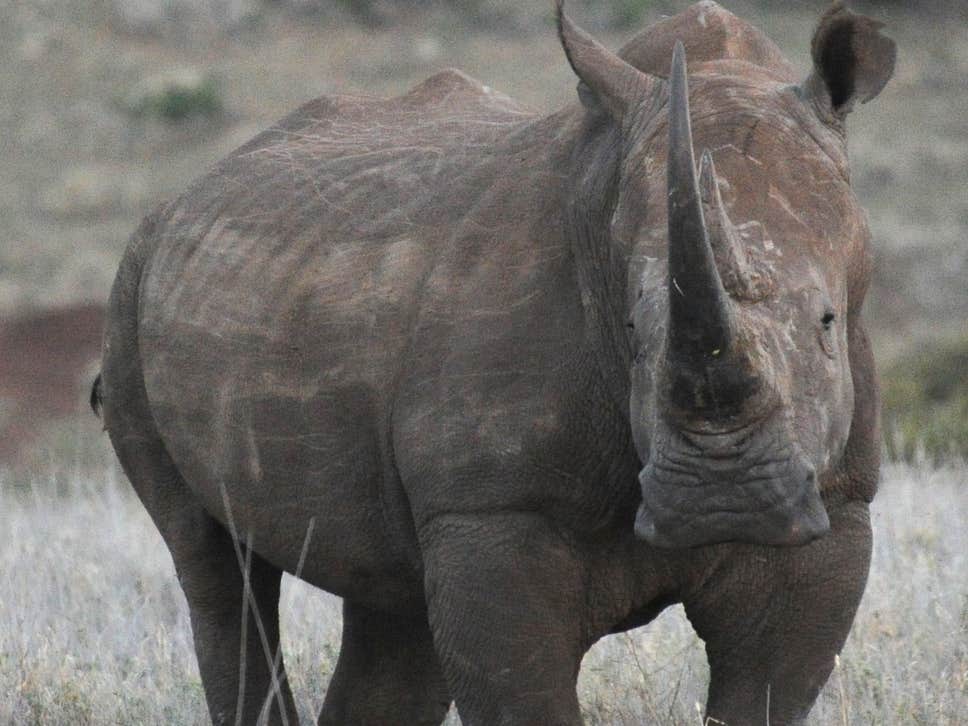 Original photo as published by Independent.co.uk: A grass (or white) rhino in northern Kenya; on average more than two a day are poached in Africa. (F Vollrath)

It has also been claimed as an aphrodisiac and a hangover cure. But all international trade in it is illegal.

Hundreds of African rhinos are killed every year for their horn, with poachers still taking an average of two-and-a-half every day, according to the Save the Rhino conservation charity. Three of the five species are critically endangered, meaning they face a high chance of becoming extinct.

Rhino horn is formed of tufts of tightly packed hair comprising solid keratin, which human hair and fingernails are also made of. The university experts have made a new material by gluing together horse tail hair, stripped of its outer layer, to form what they say is a realistic substitute.

“It appears from our investigation that it is rather easy as well as cheap to make a bio-inspired horn-like material that mimics the rhino’s extravagantly expensive tuft of nose hair,” said Fritz Vollrath, of the University of Oxford’s Department of Zoology.

He said: “We leave it to others to develop this technology further with the aim to confuse the trade, depress prices and thus support rhino conservation.”

But Born Free, the UK-based wildlife conservation charity, warned that flooding the market with such a substance could not only threaten rhinos further by stimulating demand, but also undermine efforts to educate buyers and make it harder to enforce the trade ban.

Mark Jones, a wildlife expert at Born Free, said: “If you flood the market with a product that purports to be horn, you can stimulate demand and send confusing messages to consumers, having previously told them they shouldn’t buy it.

“It could also make the job of enforcement authorities very difficult: if they have to distinguish between white powders that can be hard. A great deal of effort goes into protecting rhinos from poaching, and if you suddenly introduce a product into a market that’s based on complicated, nuanced social and cultural beliefs, and expect consumers to switch, that’s unrealistic.”

Born Free would like to talk to the researchers to express their concern, he said, adding: “We would have serious reservations.”

There could potentially be regulations relating to fraud as well, Mr Jones said.

In response, Prof Vollrath said: “Our key message is simple: rhino horn is just a tuft of nose hair. Nothing magical about it. It’s easy to replicate, very cheaply.

Why would anyone pay for expensive nose hair? “Any buyer would be fooled – and more fool him (because he is bound to be male).”

In the past decade, 8,889 African rhinos have been poached.

Save the Rhino has opposed previous efforts by four US companies to produce synthetic or bio-fabricated rhino horn.

In 2015, a coalition of more than 10 conservation groups warned against promoting fake horn as it would remove “the stigma” of rhino horn consumption and create “unnecessary obstacles for law enforcement”. It could also lend credibility to scientifically unproven medicinal beliefs, they said.