By NewsroomOctober 20, 2019Uncategorized
No Comments

KOTA KINABALU: Seven bullets were found in the last known Sabah male rhinoceros, Tam, just below his skin during the taxidermy skinning process of his remains.

It is understood that when the Sabah Wildlife Department first got Tam, there was no indication he was shot or pellets were visible on his skin.

It was found only recently when the museum did the taxidermy on Tam. 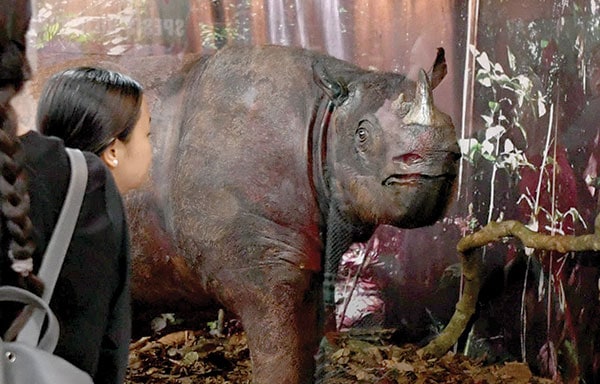 The lead pellets were found on fragments of his hind leg and lower part of his tail.

The findings raised the question of how Tam had survived that long, especially with bullets lodged in his body.

Rhinos, just like elephants, can survive gunshot wounds fired from a far range due to its thick hide, according to State Wildlife Assistant Director, Dr Sen Nathan, when asked for his views, Wednesday.

According to a website on rhinos, the skin of a rhino is around 1.5-5 centimeters thick and is formed from layers of collagen (the main protein of connective tissue in animals and the most abundant protein in mammals).

He said there have been instances where elephants live up to 10 years even with bullets lodged in their hides.

“The bullets may be lodged superficially under the skin, causing only minor damages, with no vital organs hit,” he said.
Tam, first sighted by the State Wildlife Department at Kretam Plantation in Lahad Datu on Aug 6, 2006, was the nation’s last male rhino. He died of old age on May 27, this year.

His preserved remains are currently exhibited at the State Museum’s Marble Hall until Dec 31, this year.

An abstract in the exhibition concludes the finding of the bullets. Tam had clearly been shot previously by hunters, which caused the tail rift shorter, long before the department took care of him.

Called the “Tam: Last Male Rhino”, the exhibition shows the preservation and stuffing of “Tam” from the preliminary survey on June 28, 2019 all the way to “Tam” being fully stuffed and mounted on Sept 25 the same year.

It also showcases efforts taken by the State Government in saving Borneo’s Sumatran rhino from extinction.

One of the exhibition panels displayed stated that when the State Government announced the Borneo Sumatran rhino extinct in 2015, there were only three rhinos left for captive-breeding at the Borneo Rhino Sanctuary in Tabin, Lahad Datu.

They were male “Tam”, female “Puntong”, and female “Iman”. But they couldn’t mate. In 2017, “Puntung” was euthanised after an incurable cancer.

Malaysia is now left with one female Sumatran rhinoceros, Iman.

Since her capture in 2014, no other Sumatran rhinoceros has been detected in Sabah.