Minister of environment and tourism Pohamba Shifeta has branded those against conservation hunting as accomplices to poaching.

Shifeta made the statement during a workshop on wildlife crime law amendments held in Windhoek last Friday whilst addressing the controversy surrounding Namibia’s consideration to withdraw from the Convention on International Trade in Endangered Species.

The minister noted that wildlife trafficking is a growing, multimillion-dollar criminal enterprise, and Namibia, much like the rest of the world, is experiencing unprecedented levels of poaching. Furthermore, he said conservancies can play an important role in curbing poaching if protecting the animals proves beneficial to the local communities.

“You cannot succeed in conservation if local communities aren’t benefiting from it. If they benefit, they will protect [the animals],” he stated.

During the two-week convention hosted in Geneva, Switzerland, in August, Namibia’s proposals regarding the hunting and trade of various wildlife species – namely elephants and rhinos – were rejected, prompting the decision to reconsider the country’s membership to the multilateral treaty.

Explaining his frustration with the treaty’s rejection of regulated trade in wildlife, Shifeta noted that a total ban of any product only encourages illicit markets which foster an environment for poaching. “When you’re no longer allowing it on legal markets, people will work with criminals,” he stressed.

Shifeta expounded on the supply and demand metrics which balance these “black markets”, stating that the success of these markets is due to the difficulty in obtaining these products. “There is always a demand, but because it is difficult to get, demand goes up and the price goes up. It is better to have it on legal markets to satisfy the demand and reduce the price”, he added.

Shifeta asserted that regulated trade allows the market value of the products to be regulated as well, in turn curbing the motivation to poach. 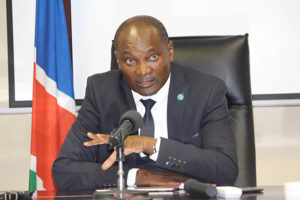 Original photo as published by The Namibian: Pohamba Shifeta

Referencing the 1996 amendment to the Nature Conservation Ordinance of 1975, he said Namibia has long identified the important role played by conservancies in conservation efforts. This amendment detailed the transfer of ownership over wildlife to the conservancies and communal groups with whom these animals share land.

Using the Bwabwata National Park as an example, Shifeta detailed that with an approximate 6,000 population, the park rakes in close to N$6 million a year, which benefits the communities within the park. “These communities can derive their well-being from animals,” he said. “When you take it away from them, they are likely to retaliate.”

Deputy commissioner Barry de Klerk, head of the police’s Protected Resources Unit, at the same workshop called poaching an economic crime that is a constant threat. Furthermore, he said poaching is a complex crime of syndicates that operate across borders.

“Although it cannot be completely eradicated, satisfying legal markets would effectively reduce wildlife crime,” De Klerk noted. Working closely with the ministry of environment and other stakeholders, the police’s Protected Resources Unit deploys a total of 280 members to various national parks and conservancies to reinforce and complement the anti-poaching and patrol efforts of park rangers.