By NewsroomAugust 10, 2021Conservation
No Comments 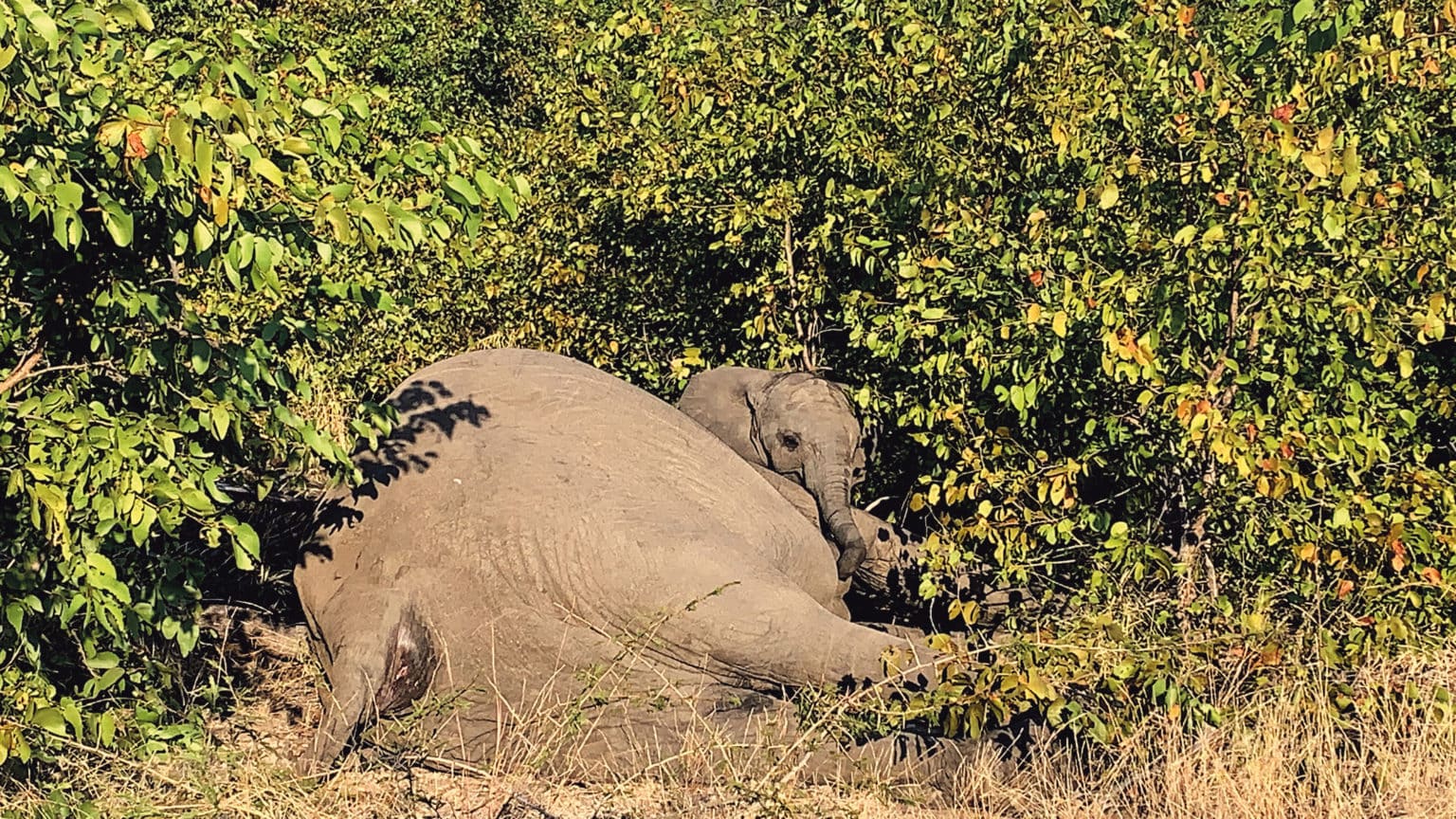 The baby elephant trying to suckle from its dead mother. Image: As originally published by Daily Maverick

The morning is fresh. In the wintry, apricot-coloured daybreak, Adine Roode has an elephant’s trunk draped across her head.

She feels the sinewy weight of it, the warmth too. She notes the extraordinary privilege of the connection, the intimacy.

Facing her is the Jabulani herd, the resident adult elephants, essential partners in rehabilitating orphaned babies.

These adults welcome orphans and take over when Roode and her team of dedicated nursery carers at the Hoedspruit Elephant Rehabilitation and Development Trust (Herd) have done their work. Her core belief? Every elephant matters!

On this particular morning, with elephant breath warming her face and the sun sliding upwards beyond the thorn trees, her cellphone vibrates in her jeans pocket.

It’s Dr Johan Marais, the wildlife vet of Saving the Survivors. His voice is urgent: “Baby ellie. Mother dropped dead in Kruger [National Park] by the side of the road. The baby’s small, trying to suckle still.”

He tells her Rendani Nethengwe, the section ranger, has arrived with his rangers and he suggested contacting the orphanage.

Herd has protocols in place for incoming crisis calls. The sanctuary must be prepared for moments like this. There’s an emergency kit already packed to go with the vehicle to collect the baby. This is a moment of extreme urgency. When rescuing an orphan, every minute counts. There needs to be as little human interaction as possible to lessen the calf’s terrible stress.

“We have the permits,” she tells Marais. “Pajero ready. If the calf is small, it’ll fit.”

“We can be there within the hour. Let Kruger know and we’ll stand by for confirmation from SANParks [South African National Parks].”

Marais lets the park know Herd is standing by with permits and will collect at their own expense. He will do the darting at the expense of Saving the Survivors. The baby will be rescued quickly and placed in safe hands.

Roode briefs her staff. Action mushrooms. Everyone knows what to do. Her carers move with focus. The nursery must be prepared. She is waiting for instructions when the second call comes in.

“We have to move fast,” Roode says. “Every minute we lose adds to this baby’s stress. We cannot mess around.”

But at Kruger, it’s getting complicated. Nethengwe tries to raise Danie Pienaar, the general manager of conservation, on the phone but he’s unavailable.

He calls Skukuza head office to get permission to relocate the baby.

One call follows another up the chain of command, with a reference to the Kruger protocols, until a decision is made. No, there will be no rescue.

Roode is checking that everything has been loaded into the Pajero when the third call comes in. Dr Marais’ voice sounds panicked, not the usual quiet weight to it.

“The decision is to shoot the calf,” he says.

“Why?” Roode asks. “We want the calf. We will assume all expenses. We can have it in rehab within the hour!”

“I’ve tried to talk them out of it, but the decision has been made.”

Roode is nauseous with shock and holds the phone tightly. She begins to plead, is there another possibility here?

There’s a shot, followed by the screaming of a baby animal in pain and terror. The baby elephant’s trumpeting continues, followed by human voices shouting. It sounds like chaos.

“What the hell’s going on?” she asks Marais.

“The baby was shot. It’s running and bleeding from the mouth.”

Roode’s confusion mixes with helpless rage: “But, why?”

Marais doesn’t have time to answer; he has to cut the call to deal with a developing crisis. The nearby herd have heard the baby’s distress. They start trumpeting, heading towards the cries, shaking the trees in response to the calf’s trauma. The calf, which has fallen, manages to stand and it runs into the bush.

“We have to track the calf,” Marais says to Nethengwe. “It’s badly injured now. We have to put it down, so it doesn’t suffer.” Nethengwe agrees.

The two men head into the bush with Nethengwe carrying his rifle. The bush thickens and the trail vanishes into it. Evening is falling. Already the grunt of lions can be heard, the woop-woop of hyenas. Being out here is dangerous now. Marais and Nethengwe are forced to abandon the search.

“Why did they do that?” Roode asks when we talk to her later. “If the baby could have contributed to elephant conservation learning, why was this not allowed? Why did [Kruger] not take the opportunity that was being offered by Herd? The baby would be alive now.”

We ask the obvious question: What would the chances have been for survival, with a calf that young?

“Extremely good,” Roode answers. “More than 80%. We would have rehabilitated and then introduced the baby to the herd. There was no problem on our side.”

We ask Dr Luthando Dziba, the acting CEO of SANParks, why this happened, and he starts an investigation. He’s thorough, a good scientist who’s clearly shocked by the incident. A week later, he gets his answer from Kruger and passes it to us. It’s unconvincing and, reading between the lines, disturbing to him as well.

Whoever ordered the baby elephant euthanised had misread the protocol. It states that “human intervention is not permitted with regard to abandoned or orphaned animals unless the cause is clearly anthropogenic in origin. An abandoned animal may not be ‘rescued’ and brought in for care and rehabilitation.”

There are two glaring problems here. Because the mother’s death (as proved by an autopsy) was natural, shooting the baby was absolute human intervention and, accordingly, in violation of the park’s protocol.

Second, baby rhinos are regularly rescued and sent to sanctuaries after their mothers are poached. That there are more elephants than rhinos in the park should not be a reason to shoot a baby elephant. And most especially when a sanctuary is available, standing by and ready to collect at their own expense.

When Dziba queries the shooting further, Kruger replies they did so because “the mother died next to the road and close to tourists. The calf could be attacked by predators and some tourists might be alarmed by this.”

How sensitive, except that tourists visit the park to see nature in action with minimal human intervention, and very often head for kills to witness the action.

Kruger is not curated nature; it’s as wild as South Africa gets.

So we’re left with some serious ethical and welfare problems that the SANParks CEO is clearly aware of and concerned about.

“I agree the calf should have been left to join the herd,” he replies to our questions. “Left alone, I’m sure it would have eventually left its mother and joined the herd, especially once predators came around.

“I also agree with you that it is contradictory for the protocol to say ‘human intervention is not permitted with regard to abandoned or orphaned animals’ and then euthanise an elephant calf whose mother has died of natural causes.

“The shooting of this orphan while the vet was on the call with Ms Adine Roode from Herd was most horrific. We have agreed as a leadership that we need to review our protocols as an organisation. But I think we rather need a review of our values in order to have a new value system that informs our procedures and protocols.”

Roode would agree. In the weeks that follow, she cannot get the trumpeting of the tiny, distressed calf out of her mind.

“Each baby elephant is precious and can contribute to an emerging body of knowledge about the rehabilitation of this intelligent, sentient creature. Each baby unlocks the mystery a little more.”

She points to wider implications. “We need to ask what will be the behavioural consequences in that herd? Elephants are extremely intelligent – they know and feel, they remember. They heard the shot and the baby’s tortured screaming. How might this affect them?”

A bungled decision impacted just one little life, but it raises questions about Kruger’s role in conservation and its protocols. It seems the new SANParks CEO agrees, which is encouraging.

“I believe that as a public institution we need to be accountable,” Dziba tells DM168. “So I encourage you to bring any matter of concern, for which we need to account, to our attention.”

Rangers search for the baby in the week that follows. A carcass is not found.

Perhaps, in some perfect world, it was taken in by the herd, adopted, nursed and is walking with the herd now. Maybe it will recover. Or perhaps it was attacked by predators and eaten.

But it could have been in safe and healing hands, resting on soft sawdust and drinking warm milk. It could have been with the Jabulani pride, walking with big foster mothers. Surely, after the terror of losing its mother, it didn’t deserve a bullet and the pain of a misplaced shot.