By NewsroomSeptember 17, 2019Uncategorized
No Comments

Neth Pheaktra, ministry spokesman, yesterday said that since September 13, warning letters were issued to 27 shops in the capital, 30 in Siem Reap province and two in Preah Sihanouk province.

“They must immediately stop selling all sculptures or any items made from ivory and rhino horns because it is illegal under the Forestry Law and the Law on Natural Protected Areas,” he noted.

Mr Pheaktra said that the ministry issued the warnings after ministry officials monitored the shops and suspected they were secretly selling items made from ivory and rhino horns. “The officials are continuing investigations and when enough evidence is found they will take action immediately,” he noted. “We also call on all stakeholders to cooperate in efforts to stop such illegal sales.” 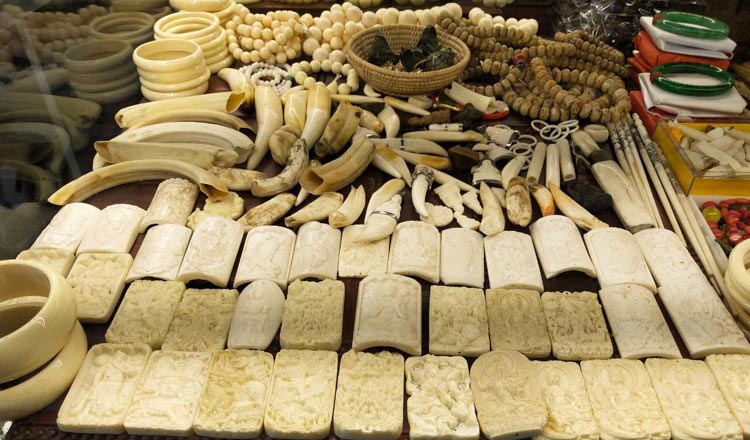 Original photo as published by Khmertimeskh.com: Some of the ivory on sale at the stores. (Source: Ministry of Environment)

Mr Pheaktra said business owners who are stocking and selling ivory and rhino horn souvenirs must hand these products to the authorities as soon as possible to avoid facing legal action when the items are seized during raids. He said that selling, importing and exporting ivory products and rhino horns is a criminal offence and offenders face a jail term if convicted.

Mr Pheaktra noted that the crime is punishable under the law on money laundering and terrorism financing. “Such activities in the Kingdom will negatively impact the efforts to stop illegal trade by the government, as a signatory of the Convention on International Trade in Endangered Species of Wildlife, and damage Cambodia’s reputation internationally,” he said.

He said that the ministry had also issued the warning letters to the shop owners in its efforts to eliminate all forms of wildlife trafficking, both processing and selling.

“Cambodia, as a member of the United Nations, is ready to cooperate internationally with all countries in the conservation of natural resources and prevent the illegal trafficking of wildlife,” Mr Pheaktra noted. “Cambodia has been actively involved in the fight against the illegal wildlife trade, and it has also cooperated as an international partner in the preventing, protecting and cracking down on illegal wildlife trade worldwide.”

In the past, authorities have seized ivory products, including sculptures and rhino horns. According to ministry figures, from 2016 to the end of 2018, more than five tons of ivory and rhino horns were seized during crackdowns.

In February 2017, Prime Minister Hun Sen instructed the authorities to keep ivory, rhino horns and other rare specimens which were seized in raids for public exhibition and scientific research because these items were rare and almost extinct.

Mr Pheaktra noted that the ivory and rhino horns, along with other rare animal specimens, are being kept in a safe place.