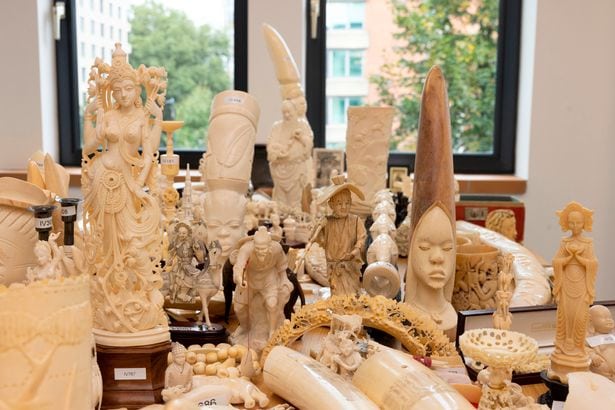 Pieces given to IFAW. Image: Phil Harris/As originally published by The Mirror.

More than 900 ivory items were for sale online in Britain, despite a three-year-old law to stop the deadly trade.

More than two thirds of the 913 items were made from elephant tusks, although hippo, walrus and whale ivory was also available.

The Ivory Act passed in 2018, which the Government said would ban sales, is not implemented.

Charity International Fund for Animal Welfare, which did the two-week online study, is urging ministers to keep promises to protect the endangered animals in Africa from extinction.

IFAW UK Director James Sawyer said: “With 20,000 elephants a year still being poached for the ivory trade, or one every 26 minutes, it is vital our Government implements the UK ivory ban urgently.

“Legal ivory trade provides a smokescreen for further illegal trade and with elephant populations already decimated by the poaching crisis, there is no more time to lose.

“Every day without the ban being ­implemented, a significant amount of ivory continues to be legally bought and sold in the UK. It is time for the Government to act on its promise.”

The Daily Mirror photographed the stockpile, which represents the slaughter of hundreds of animals, before it was handed to Border Force officials for disposal.

But now IFAW has stopped accepting ivory as it wants the ­Government to accept full responsibility.

The most prolific website for ivory was the auction house the-saleroom.com, which had 190 adverts. It was also on sale on eBay, antiquesatlas.com and ukauctioneers.com.

Under current rules all these sales are completely legal. Mr Sawyer said with so much ivory available in the UK it is hard to ensure ivory from recently killed elephants is not for sale.

IFAW thinks Government plans for ivory owners to register their property would be unworkable and enable the trade to continue unchecked in Britain.

It said Department for ­Environment registered experts would lack the experience to judge the age of an ivory trinket.

The Government said it would be “the ­responsibility of the owner” to check the legality of an item.