Sisterhood of the snake bites back at hunters, South Africa

By NewsroomSeptember 10, 2019Anti-poaching, Conservation
No Comments

We are driving across the outer Kruger National Park when suddenly a snake slithers across the dirt track in front of our open-top car. It’s a black mamba. Our driver stops abruptly.

“Oh wow. They’re pretty rare out here,” he says. “I’ve only seen one this past year. It can kill within 20 minutes.”

The black mamba is not only one of the world’s most deadly snakes, but it can move at speeds of up to 16kph and grow to a length of 4.5 metres, making it the fastest and second-longest venomous snake on the planet after the king cobra. It can also raise its upper body off the ground to stand erect on two-thirds of its length. Luckily, I was spared that sight.

Perhaps it is an omen for the trip, though I hope not a bad one, as I am on my way to patrol with the Black Mamba Anti-Poaching Unit (APU), a ranger unit created to protect wildlife in South Africa’s nature reserves and national parks. Founded in 2013 by Craig Spencer, head warden and senior ecologist of the 400 sq km Balule Nature Reserve — part of the 19,485 sq km Kruger — and Amy Clark of Transfrontier Africa, a non-profit conservation and research body, the Black Mambas started with six members. Since then, the unit has grown to 32 members — “Soon to be 36,” says Spencer — mostly comprised of women.

Since the unit began, the number of rhinos lost to poaching in the Balule has gone down, while snaring and illegal bushmeat incidents have been reduced by 75%. Nine poacher incursions have been detected, more than 1,500 snares have been removed and several offenders have been arrested. And they do it unarmed. 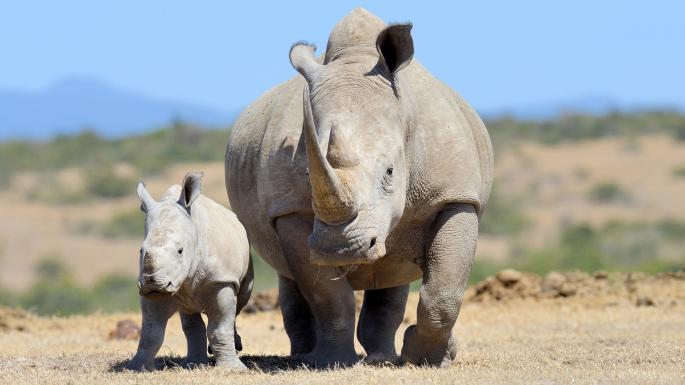 Original photo as published by The Times: The number of white rhinos has soared over the past century, having been close to extinction. (Photo: Alamy)

Instead, they create a visible police presence, replicating Britain’s bobbies on the beat as “the bobbies of the Balule”. They aim to discourage poachers’ attempts to meet demand for the tusks, horns and organs of endangered species that are status symbols, aphrodisiacs and ingredients in Asian traditional medicine.

In an effort to engage the surrounding impoverished communities — where many of the poachers come from — the reserve began hiring and training local jobless female high-school graduates.

“The Mambas are a success story, not just because of the work they do and the global recognition they have received, but also because the women come from local townships, where often they had little hope,” says Spencer. “Now they are role models and pass on their experiences.”

The Mambas operate in three areas of Kruger National Park, patrolling the gates for any illegal activity at dawn. According to helpingrhinos.org, there can be up to 11 poaching gangs at any one time operating in the Greater Kruger area.

After a six-hour journey by car, northeast of Johannesburg, at the Olifants West gate of Balule Nature Reserve, I meet four members: Goodness Mhlanga, Felicia Mogakane, Zenzele Mangani, and one male Mamba, Colin Mathebula. “I am the king among queens: I help the Mambas fix things and jumpstart the jeeps,” says Mathebula.

“Are you OK in those shoes?” Mhlanga asks me when she gets out of the jeep. “How do you feel about walking around a park that has the big five?”

The “big five” she refers to are lion, leopard, rhinoceros, elephant and cape buffalo — the holy grail of safari. The term was coined by 19th-century big-game hunters and refers to the five most difficult animals in Africa to hunt on foot. As far as my feet are concerned, the trekking sandals I brought instead of hiking boots fell apart suddenly, and the replacements I bought are not ideal, but I assure her I will keep up. As it turns out, I complete the 7km trek without incident.

While I’m confident of my walking ability, I wonder aloud what we should do if we stumble upon a hungry pride of lions. “Stand together and clap,” she advises, “then they’ll run away.”

As we walk, I bring up a report I read recently of a poacher who was killed by an elephant and then devoured by lions, not too far from here. It turns out poachers don’t get much sympathy from anyone in these parts — my story elicits a shrug of the shoulders and, “Oh well. Tough tits.”

The Mambas gather intelligence, observe and conduct vehicle checks and road blocks. They also educate their peers on the importance of conservation in their communities. “We are the eyes and ears of the park,” says Mhlanga.

Most of the Mambas’ recruits come from townships within a two-hour drive from the Balule, which originally consisted of several separate fenced game farms that dropped their fences and incorporated with the Kruger during the 1990s. “We work 21 days on, then we have a week at home, then we come back again,” she continues.

What about Mambas with children? “They see them when they get home,” says Mhlanga. “It’s hard. I don’t have children myself, but most of us do.”

Mhlanga, 25, joined up in 2014 after dropping out of college when her parents could no longer afford it. Mogakane, a 31-year-old mother of two, and Mangani, 30, who has one child, say they have got used to being away from their families. “Our families mind the children,” says Mogakane. “It’s hard, but now we can afford to pay for our children, which we couldn’t before. Life before the Mambas was very tough.” Mogakane joined fellow Mamba Collet Ngobeni to receive the coveted UN Champions award in New York in 2015 on behalf of the unit. “It was awesome,” she says of the experience.

Mangani doesn’t speak to me at all, instead conversing with her colleagues in their native tongue, Tsonga, while she gets on with the patrol.

So what exactly are poachers after in this area? “Just rhino,” says Mogakane.

According to South Africa’s Department of Environmental Affairs, Kruger National Park is home to about 600 black rhinos, but it loses almost 500 to poachers each year. The mathematics of this is depressing: in 15 years they could all be gone. To put these numbers in perspective, in the 1970s there was 70,000 black rhino.

“It’s very sad,” says Mogakane. “When I first came across a rhino killed by poachers, I was so sad. The poor animal was just lying there. Sometimes they get killed by snares and it can take days or even weeks for them to die. It’s so inhumane.”

The lucrative market in China for rhino horn is what entices poachers to kill. It is made of keratin, a fibrous protein that is also the main component of hair, hooves, claws, nails and skin, and has no actual healing properties. It is ground into a powder or made into tablets to treat nosebleeds, stroke, seizures and fever. In addition, a largely Vietnamese clientele collects the horns as symbol of wealth, while many snort it after a filling meal to counteract bloating (sometimes mixing it with cocaine), even though they may as well be snorting their own fingernails.

This demand from some of Asia’s elite has created an international army of poachers, many of whom are recruited in Mozambique. They travel on foot, jump on passing trains and break fences to get into Kruger National Park to snare and kill their prey.

The trafficking of animal parts is worth billions, and is akin to drugs and arms dealing. It is the fourth most lucrative global crime, valued at about €15bn annually, according to the International Air Transport Association.

“The only way a war on poaching can be won is via international outrage,” says Lucia Prinsloo, a 25-year-old zoologist in nDzuti Safari Camp, near Balule reserve.

“This would involve government boycotts with countries like Vietnam, where 90% of rhino horns end up and China, which traffics ivory and lion bones from South Africa. It’s difficult because there’s so much money involved. One tip-off is worth a year’s salary, so guides are tempted into giving poachers the location of animals. There’s so much corruption. The poaching onslaught is relatively new but already putting rhino on the edge of extinction.”

In Ireland, we live far from such problems, but seeing these beautiful animals in the wild, and knowing their existence is at stake, feels terrifying.

“All is not lost,” says Spencer. “The Mambas bring focus to the rhino poaching cause, and the public need to realise their value in saving the rhino. As World Rhino Day approaches, I would like to remind everyone that they play a critical role, by pressing decision-makers to provide resources for boots on the ground. Lobbying in your home country works.”

As I drive through the bush with the Mambas, I consider the importance of these animals. Despite the fact their plight seems a million miles from our daily problems, their rescue should be as important to us as it is to the Black Mambas. As Mogakane puts it: “We just want our children to see rhino babies.”