Slow growth in black rhino numbers cause for hope: Conservationists

The tentative recovery of Africa’s black rhino population was hailed by conservationists on Thursday as a cause for hopes that ambitious protection efforts could overcome the “acute threat” of poaching.

The International Union for Conservation of Nature said the number of black rhinos, which were once plentiful across sub-Saharan Africa, increased at a “modest” annual rate of 2.5 percent from 2012 to 2018, from an estimated 4,845 to 5,630 animals in the wild.

It said the population was expected to continue its slow increase for the next five years.

“While Africa’s rhinos are by no means safe from extinction, the continued slow recovery of Black Rhino populations is a testament to the immense efforts made in the countries the species occurs in, and a powerful reminder to the global community that conservation works,” said Grethel Aguilar, Acting Director General of IUCN in a statement. 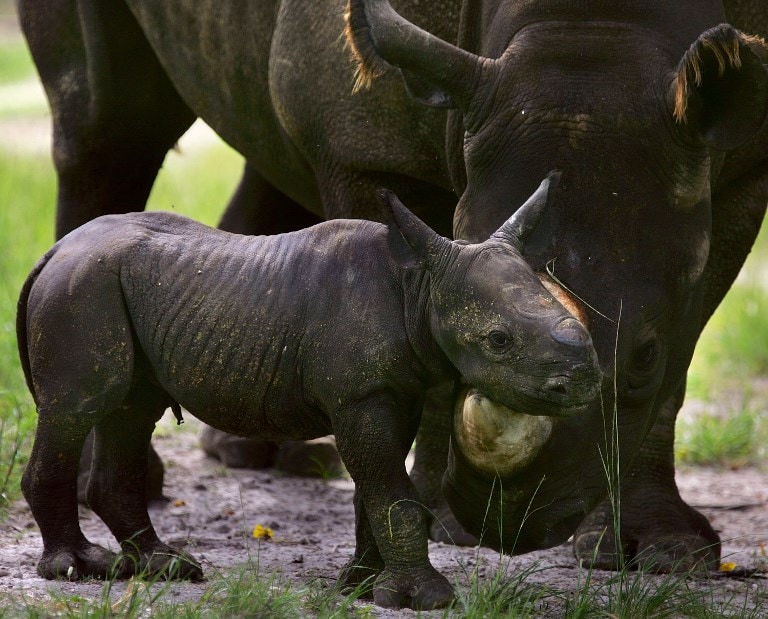 Original image from The Jakarta Post: The number of black rhinos, which were once plentiful across sub-Saharan Africa, increased at a “modest” annual rate of 2.5 percent from 2012 to 2018, from an estimated 4,845 to 5,630 animals in the wild. (AFP/Joe Raedle/Getty Images)

“At the same time, it is evident that there is no room for complacency as poaching and illegal trade remain acute threats.”

Thousands of rhinos that once roamed Africa and Asia have been culled by poaching and habitat loss. Very few are found outside national parks and reserves.

Poaching is fuelled by a seemingly insatiable demand for rhino horn in Asia, where people pay huge sums for a substance — coveted as a traditional medicine — that is composed mainly of keratin, the same substance as in human nails.

The black rhino has three subspecies, one has recovered enough to be classified as “near threatened”, from “vulnerable”, while the other two remain critically endangered.

Africa’s more numerous white rhino — targeted by poachers partly because it has larger horns — has continued to suffer losses.

The Southern White Rhino subspecies declined by 15 percent between 2012 and 2017, from an estimated 21,300 to 18,000 animals, according to the IUCN, largely due to extensive poaching in South Africa’s Kruger National Park. The other subspecies, the Northern White Rhino, remains listed as critically endangered, possibly extinct in the wild.

In February, Botswana said at least 46 rhinos had been slaughtered there in 10 months — reducing the country’s population of the protected animals by almost ten percent and prompting the government to warn that they could be wiped out in the southern African country by 2021.

The increase in black rhino numbers was dependent on continued robust law enforcement measures and efforts to encourage populations to reproduce by moving some rhinos to new locations.

But the IUCN, which released the statement as part of its Red List of 116,177 species, of which 31,030 are threatened with extinction, warned that the costs of keeping rhinos safe could hamper progress.

It said around half of white rhinos and some 40 percent of black rhinos were now conserved on private or community managed land and warned the trend towards rhinos being increasingly viewed as costly liabilities could threaten to limit or reverse the future expansion of the species’ range and numbers.

Black rhinos first suffered from hunting by European settlers. Later, poachers largely wiped them out, with the population declining from an estimated 37,807 in 1973 to a low of 2,354 in the mid 1990s.