By NewsroomJune 22, 2022Anti-poaching, Science and technology
No Comments

Park rangers walk next to a fenceline fitted with sensors for data collection. Image courtesy of Smart Parks.

You’ve heard of smartphones, smart cars, smart cities, even smart refrigerators, but have you heard of Smart Parks? Smart Parks is a Netherlands-based team of technologists dreaming up inventive ways to realize the founders’ vision of bringing the power of modern technology to bear in conservation.

“Big tech organizations like Google and Microsoft have big conservation programs, but it’s not their core business,” says Tim van Dam, one of the co-founders of Smart Parks and a telecoms expert. “We know that if something is not your core business, you cannot get to the high-performance level that is needed for technological devices.”

Smart Park’s philosophy is to apply an innovative and research-and-development-focused approach, more commonly found in Silicon Valley, to conservation problems. While they explore many different forms of tech, they’re best-known for building so-called LoRa networks in parks and conservation areas, mostly in Africa, through which multiple devices can be connected to create “smart parks.”

LoRa, or long range, technology is a networking protocol that uses radio waves, much like the 4G and Wi-Fi networks. The key difference is that while 4G and Wi-Fi are designed to send a lot of data a short distance by using a lot of power, LoRa technology is designed to send tiny amounts of data — about the size of a text message — a very long way, using much less power. A LoRa tower being erected in the Central Tuli Block, a conservation area being created by a group of private landowners in southern Botswana with assistance from the Timbo Afrika Foundation. Image courtesy of Smart Parks. The control centre at Akagera National Park, Rwanda. From here, the park management can see all the data collected by sensors on the LoRa network. Image courtesy of Smart Parks.

“[LoRa] was the perfect match for connecting a lot of things in remote areas to make sure the park management protecting those areas have an opportunity to get way more data from the field,” van Dam said.

LoRa’s lower power requirements allow Smart Parks to design tracking devices that are smaller than traditional satellite collars. This is especially advantageous for tracking smaller animals like wild dogs, which can’t take the weight of a large battery, and, perhaps surprisingly, rhinos. While a rhino could easily carry the weight of a heavy battery, collars don’t work with their body shape.

Protecting the near-threatened southern white rhino (Ceratotherium simum simum) and the critically endangered black rhino (Diceros bicornis) is one of Smart Parks’ current main aims. Its rhino tracker is just under three centimetres cubed, small enough to be implanted into a hole cut into the rhino’s horn and then sealed by a vet.

“The industry has been searching for a very long time now on how to track a rhino with GPS,” said Geoff Clinning, technology development manager for African Parks, a conservation NGO that manages protected areas in partnership with governments and local communities, and which has put LoRa technology to use in many of its parks. “It’s such a massive leap forwards knowing where every rhino is every morning and every evening.” Smart Parks’ hope is that the data collected through a range of sensors — such as animal locations, fence voltages and vehicle movements — and reported to a nerve center over a LoRa network will help give anti-poaching operations an advantage, something they call situational awareness.

“Everybody thinks anti-poaching is a matter of boots on the ground. It’s not,” said Jurgen Elbertse, director and co-founder of Timbo Afrika Foundation, who recently contracted Smart Parks to install a LoRa network covering 30,000 hectares (74,000 acres) in the Central Tuli Block in southern Botswana. “It is making sure you cleverly and intelligently look at the asset you want to protect.”

Elbertse drew an analogy with protecting a diamond: rather than trying to secure a whole building, you focus on constructing a secure vault to hold the diamond. In anti-poaching terms, the “situational awareness” gained through the sensors means you can strategically direct your efforts to key animal locations.

But while technology can certainly help give anti-poaching teams an advantage, it’s no silver bullet, Clinning said.

“LoRa is a very valuable tool in a park manager’s toolkit, but it’s one of many,” he said. “Even if you can track something, you still need to have well-trained rangers who can be on foot who can monitor [the animal].” 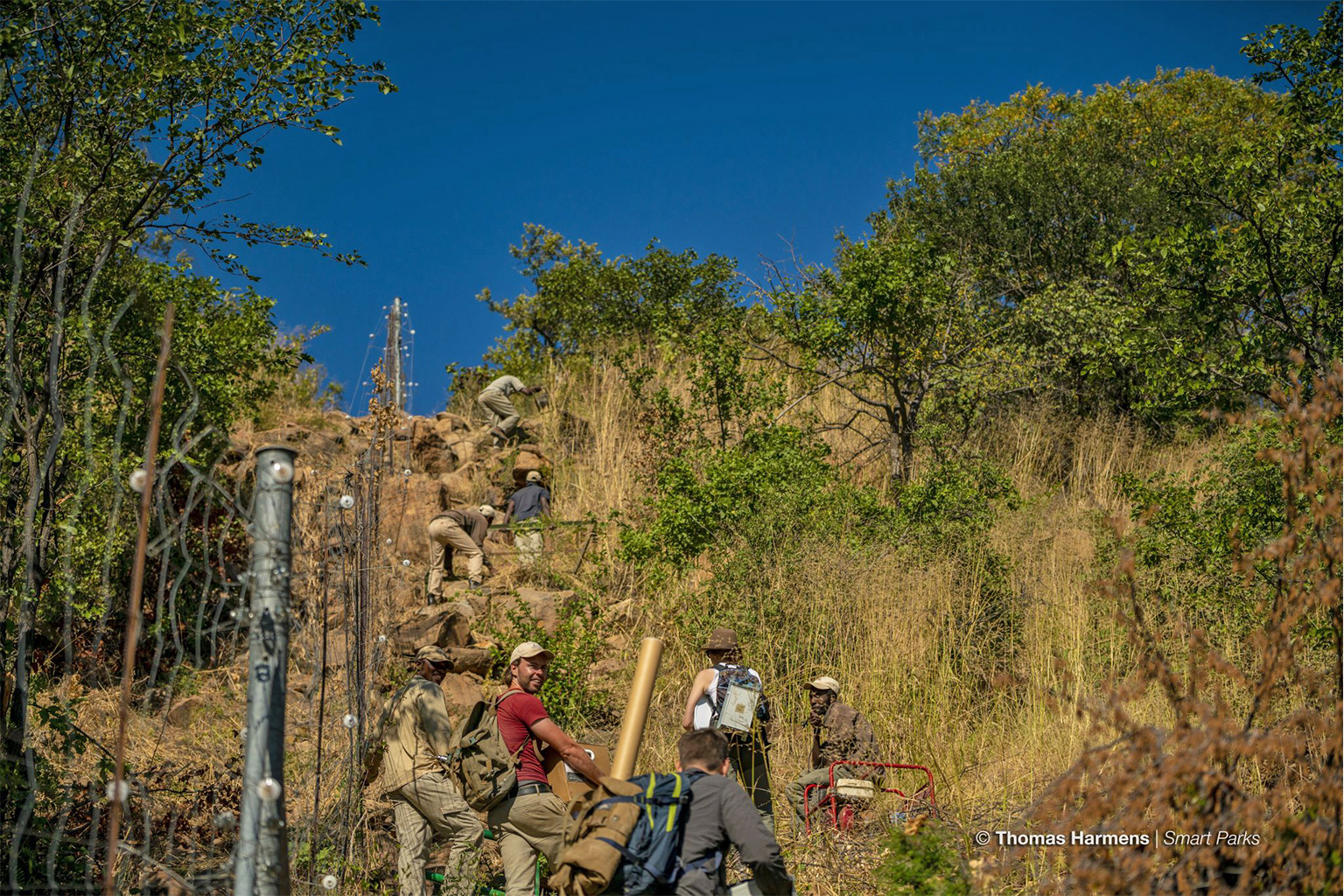 Elbertse’s team installing the LoRa system in the Central Tuli Block. “To carry a 6 metre mast up a rugged hillside with no pathway and big boulders and very steep is quite an effort!” said Elbertse. Image courtesy of Smart Parks.

All sources agreed that LoRa is especially useful in remote areas where there are no mobile networks already in place. Parks need to pay an initial setup cost, which varies depending on the location’s infrastructure and whether the staff have the skills to set it up without help. If the park already has a good network of radio towers for communication, it can be as simple as adding a LoRa gateway to each tower at a cost of around $1,000 per tower.

Once the network is established, parks can gather reams of information beyond tracking animals to prevent poaching, such as temperature data or water levels in key water holes. They can even flick a switch to turn on a water pump — something that previously would have taken a ranger a round trip of several hours to do in some large parks.

In other places, the sheer size that the network would need to cover makes it less suitable. For example, Clinning said satellite collars are still the best tool to track the park’s mixed population of forest elephants (Loxodonta cyclotis) and bush elephants (Loxodonta africana) in Garamba National Park in the Democratic Republic of Congo. Here, the elephants travel across vast areas, and LoRa towers in certain locations would be vulnerable to vandalism.

For the Smart Parks team, building LoRa networks is just the beginning. Van Dam’s latest project is the ElephantEdge collar, which, in addition to transmitting its position, tracks animal sounds and motion. The hope is that this new wealth of data, combined with machine learning, could generate new insights into elephant behavior and ecology. 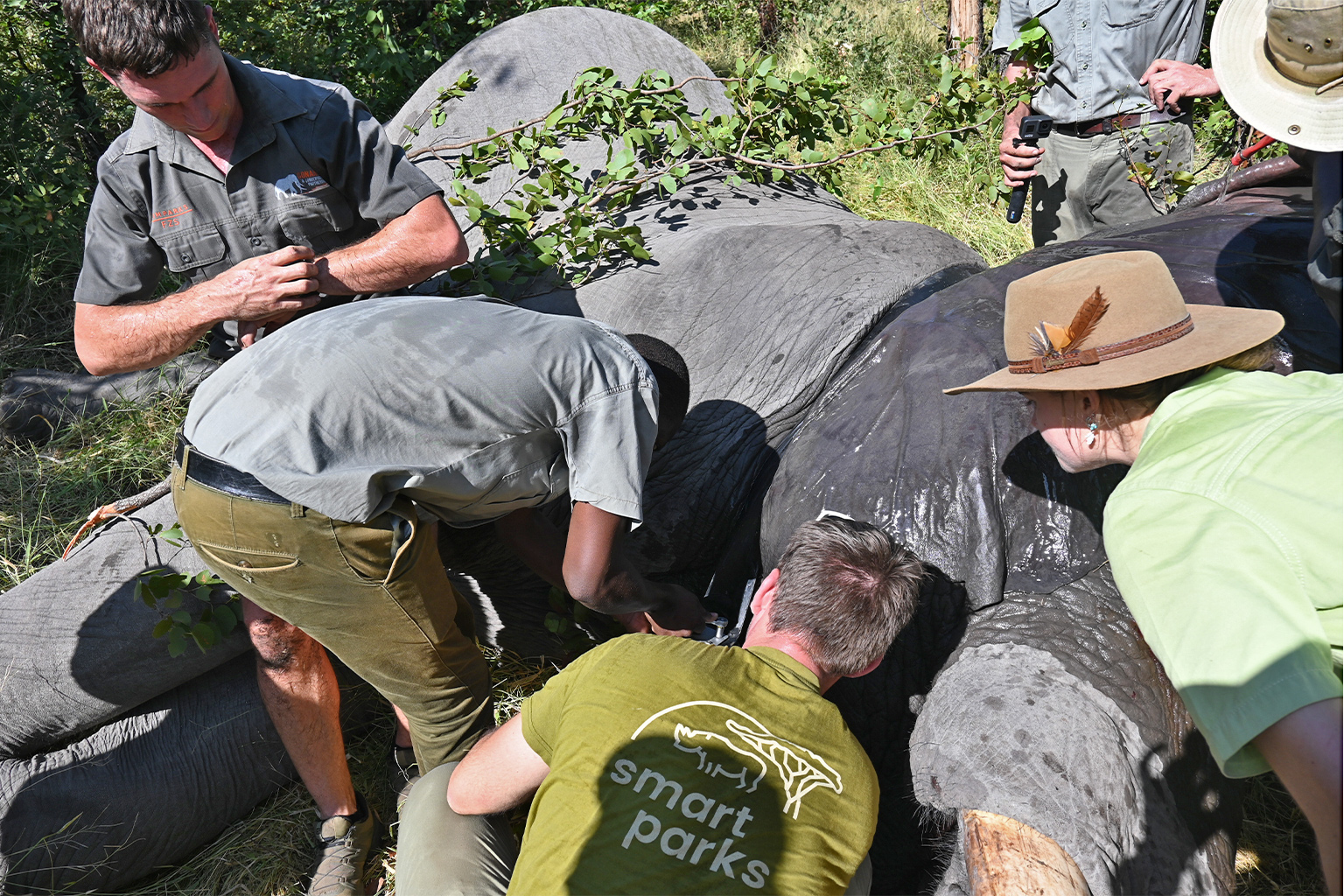 “I had the opportunity to put on the [ElephantEdge] collar myself, putting on the bolts, feeling the breathing of this animal, that’s really amazing,” said van Dam. The Smart Parks team fit one of their latest ElephantEdge collars with advanced sensor technology in Gonarezhou National Park, Zimbabwe. Image courtesy of Smart Parks.

Smart Parks’ biggest challenge may be securing long-term funding rather than solving a technological puzzle. The organization is split between a nonprofit organization, which focuses on R&D, and a company that markets its products. However, Smart Parks is reluctant to charge enough to make a profit on its collars, preferring to search for grants to cover R&D and keep the costs as low as possible for perennially cash-strapped protected areas.

But it isn’t easy, van Dam said. “A lot of big NGOs don’t understand R&D and they don’t understand technology innovation. Supporting the running costs of an organization like Smart Parks is not sexy somehow.”

Smart Parks also keeps all its technology open source, meaning the designs and code can be examined and modified by anyone. This is meant to ensure others in the industry don’t waste time repeating the same work, as well as making it possible for others to carry it forward, should the organization have to shut down. It also seeks to train local people so that the knowledge is shared, and others can replicate installations, for example, without the costs of flying in its expert team. For Elbertse, this knowledge sharing is a key plus of using a technological approach to conservation.

“The benefit is that you invest in a local person that you assist in getting more knowledge and education,” he said. “That is important. I’d rather have an electronics person working for me than people who have to carry guns — we think it’s a better investment.”

Banner image: Park rangers walk next to a fenceline fitted with sensors for data collection. Image courtesy of Smart Parks.