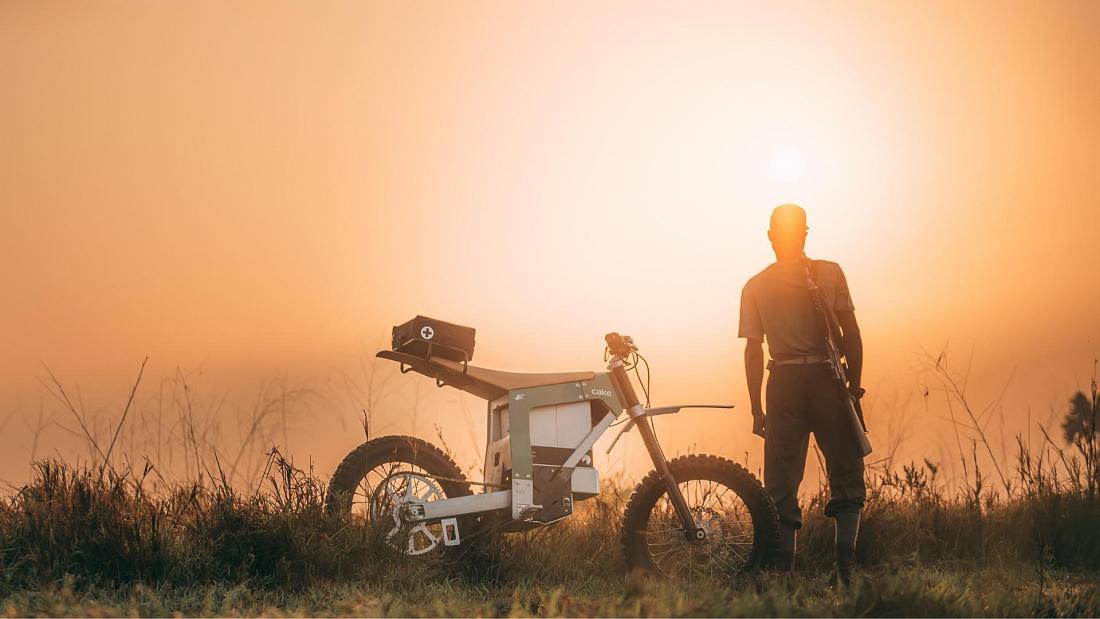 Off-road motorbikes are an important tool for anti-poaching rangers in South Africa, allowing them to quickly reach remote destinations where wildlife crime occurs.

But ‘bush bikes’ can be loud with the roar of their petrol-powered engines alerting poachers to their presence before they arrive. So a virtually silent solution is needed to help them be more stealthy on their patrols.

Swedish company CAKE has teamed up with the Southern African Wildlife College (SAWC), a conservation training initiative near Kruger National Park in South Africa, to find one.

“The poachers, they hear these guys 45 minutes away, so they just pack their stuff and leave. The level of being effective is very low,” says Stefan Ytterborn, CEO of the company.

“They always arrive too late, everyone has escaped, so busting them is nearly impossible.”

Together they have developed an electric motorbike that allows rangers to approach poachers without being detected – all while reducing pollution and costs.

Solar charging in the middle of nowhere

Running fossil fuel-powered bikes is expensive, requiring petrol deliveries to be made to rangers in remote parts of the African bush.

“Motorbikes are being used in Africa, but they’re combustion in bikes. And the challenge here is that they either need to fly in the gasoline or bring it in by truck to the middle of nowhere,” says Ytterborn.

These deliveries cause pollution and damage to already environmentally vulnerable areas too.

Mobile charging stations and solar panels allow these electric bikes to be charged using the sun instead.

It means they can operate off-grid and independently from traditional power sources.

“We can charge these bikes with two batteries, one battery always being, you know, with the power station, the other battery being in the bike.”

Feedback from the rangers has also helped to increase the durability of the motorcycles. The harsh conditions in remote South Africa with high humidity, heat and dust have led to improvements that will help them to last longer out on patrols.

Phase one of the initiative has seen €300,000 of equipment donated to SAWC. That includes 10 bikes, batteries, mobile charging stations and more. Although there have been delays due to shipping issues and the COVID-19 pandemic, two bikes are already being used by rangers from SAWC.

After five months, the college has seen a cut in running costs for its anti-poaching initiative. That means money can now be dedicated to hiring more rangers, increasing their pay and running additional patrols.

‘It’s not about busting the poachers’

Ytterborn says he was naive going into the project, believing that poaching was all about the lucrative trade in ivory and ingredients for alternative medicines. The reality was the much more humanitarian issue of local people in need of food.

“The interesting thing here is that these guys, the anti poachers, it’s not about busting them and selling them out to the police,” he explains.

“What they do is that when they’re being busted, they actually offer these guys money in exchange for stopping poaching. So they get a bit of cash to buy food, instead of having to hunt.”

So far, successes have come from preventing the hunting of smaller animals. Several species of rare antelope have been protected with the bikes proving particularly effective for finding poachers at night.

It is still early days for the project with the first bikes having arrived in September last year. Ytterborn hopes that as CAKE sends more for the rangers to use, the company can get real data to help understand what is needed.

“I’d say that, in the best of cases, by 2024, there’s going to be a fleet of potentially, five times as many bikes really making a difference.”