In the name of conservation, South Africa is adopting a new policy that will allow trophy hunters to kill more — not fewer — endangered black rhinos, a move that has wildlife advocates split as poaching concerns endure.

At the Convention on International Trade in Endangered Species in Geneva, delegates from countries across the globe voted this week in favor of South Africa’s hunting proposal, which slightly increases the annual number of game hunting permits available to the public and narrowly defines which black rhinos can be hunted: older, agitated non-breeding males.

There are about 5,000 black rhinos on the planet, and nearly 2,000 of them live in South Africa — a steady increase in a population decimated by poaching over a 20-year period. From 1970 to 1992, the population decreased from 65,000 across the African continent to 2,300, a drop of 96 percent, according to statistics from the International Rhino Foundation.

South Africa allows five black rhinos a year to be killed by trophy hunters. The new policy would change the math from a set quota to a fixed 0.5 percent of the black rhino population, which under today’s numbers would equate to nine adult males.

Though confounding on the surface, South Africa’s logic is based on precedent.

An uptick in hunting permits helped the white rhino, too, according to a report by the wildlife trade monitoring organization TRAFFIC. 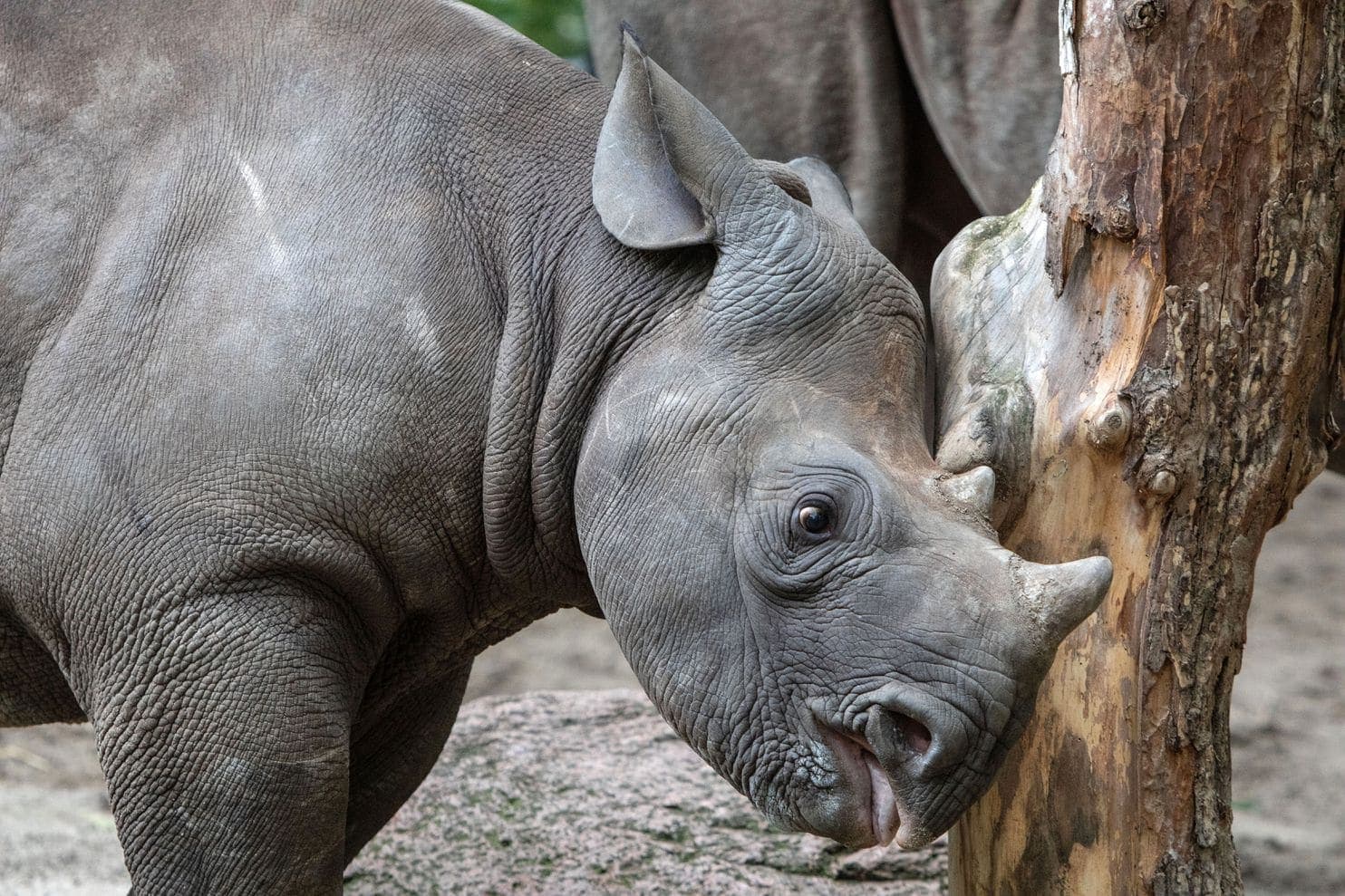 Original photo as posted by The Washington Post: A baby female black rhino at the Berlin Zoo. Photo: Omer Messinger/EPA-EFE/Shutterstock

Aging male rhinos can be territorial and will interfere with mating female rhinos and younger male rhinos, hindering population growth. South African officials argued that by allowing game hunters to target only that problematic group of old males, the policy had the potential to not only increase the chances for healthy reproduction but also increase discretionary revenue.

Permits for black rhino trophy-hunting are pricey and nearly always purchased by foreigners, according to the policy language. It projects that additional revenue from the sale of more permits would generate funds that could be applied to anti-poaching and other wildlife conservation measures.

The countries of Gabon and Kenya, as well as the Born Free Foundation — which spoke on behalf of nine other wildlife conservation organizations — opposed the measure, raising concerns over poaching challenges.

But they were outnumbered by the policy’s supporters, which included Canada, the European Union and six African nations that surround South Africa.

“On the face of it, increasing the trophy hunting quota at a time when poaching of rhinos in South Africa is rampant might seem a rash move, and clearly curtailing indiscriminate poaching must remain a conservation priority,” Richard Thomas, a spokesman for TRAFFIC, said in a statement to The Washington Post. “However, there are sound biological reasons why careful, selective removal of older, post-breeding males — a process that can also raise conservation funds through selling the trophy hunting rights — enables younger, more vigorous bulls to come through and boosts overall breeding success and productivity of a population.”

Thomas cited the population recovery of the white rhino as proof that this strategy can work.

In their study on rhinos in 2011, TRAFFIC noted that the introduction of sport hunting in South Africa coincided with a steady rise in white rhinos. In 1968, when game hunting was introduced, there were 1,800 white rhinos in the nation. By 2011, the population had swelled to more than 18,000, according to the report.

“Rather than hindering population growth, trophy hunting is regarded as having positively influenced White Rhino numbers and population performance in many direct and indirect ways,” the report said.

But skeptics of the policy argued at CITES that there is no demonstrable need for more hunting permits, because in past years even the smaller five-rhino quota has not been met.

And poaching remains a critical problem.

Susan Lieberman, vice president for international policy for the Wildlife Conservation Society, said in a statement that her organization “remains concerned about the impact of illegal hunting of black rhinos and trafficking in their horns.”

Save the Rhino, an anti-poaching conservation organization, wrote in a post on its website that the key part of South Africa’s proposal “is not the hunting itself, but the calculations based on population size.”

“To increase confidence, more regular updates on populations need to be reported, with provincial breakdowns, more promptly,” Save the Rhinos wrote in the post. “Not only would this help to determine the population, but also benefit overall biological management.”