By NewsroomFebruary 24, 2020Anti-poaching, Conservation
No Comments

KRUGER NATIONAL PARK, SOUTH AFRICA: Officials at South African National Parks say cooperation with neighboring Mozambique has been a key factor in reducing rhinoceros poaching in the famous Kruger National Park. Kruger is home to the world’s largest wild rhino population, and has proven a tempting target for poachers who for years jumped the park’s borders.

South African rangers, their Mozambique counterparts and private business people leasing land from Mozambique’s government recently met with journalists on the border fence between the two countries, during a park-organized media trip to the Marula North region of the Kruger.

This area used to see heavy rhino poaching originating in Mozambique, but rangers say they now see a positive trend.

“Between 2018 and 2019, this area had 53 percent decline in incursions of rhino poachers, and we lost 47 percent less rhinos. That is a massive gain. And that wasn’t coincidental. We’ve done that on the back of a growing rhino population in Mozambique here, and a stable rhino population in the Kruger Park in this area,” said Steven Whitfield, Marula North regional ranger in Kruger National Park.

Poachers have long targeted African rhinos for their horns, which fetch up to $60,000 per kilogram in Asian markets.

But improved patrols, technology, and cross-border cooperation are helping to reverse rampant poaching that peaked in 2014, when nearly 830 were killed in the park. 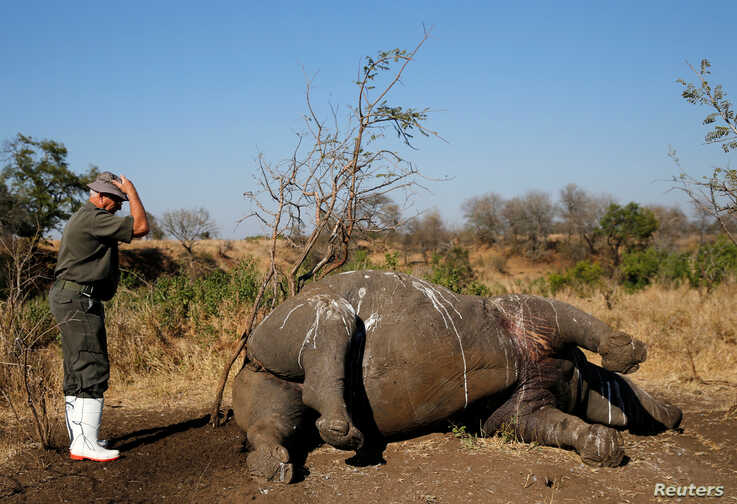 Original photo as published by VOA: A ranger gestures before performing a post mortem on a rhino after it was killed for its horn by poachers in South Africa’s Kruger National Park, August 27, 2014. REUTERS/Siphiwe Sibeko/File Photo

“Last year we had 738 and this year it’s 536, which is very encouraging. It means that the methods that we have put in place to combat poaching are working,” said Ike Phaahla.

Policing Kruger National Park – one of Africa’s largest game parks at approximately 19,500 square kilometers – is not easy. Rangers use helicopters in addition to sophisticated surveillance equipment.

“So, the poachers that commit a crime in Mozambique run to South Africa and vice versa.  So, without those three elements – communication, coordination and co-operation – we would not be able to deal with this,” said Carlos Pereira of the National Administration of Conservation Areas in Mozambique.

However, Professor Brian Kelly, head of the Department of Nature Conservation of the Tshwane University of Technology in Pretoria, believes that funding for the anti-poaching programs may run short because of the countries are barred from legally selling rhino parts.

He also believes poaching will not end due to broader socio-economic problems.

“And in terms of the long-term sustainability not only of the population, but of the staff – how long can these people continue with this conflict without psychological problems arising amongst the staff themselves? [[CUT]] So, if we don’t have social upliftment on the outside, we can’t guarantee the long-term survival of these populations in these hard protected areas,” he said.

Kruger National Park currently has an estimated 8,600 wild rhinos, a key part of wildlife viewing that attracts nearly a million tourists per year.

Officials on both sides of the border hope that with further cooperation, those numbers will only grow.