The South African government is under fire for permitting gene manipulation ventures that could have a damaging effect on the continent’s wildlife.

Lions, rhinos and cheetahs are among the wild species at risk of irreversible “genetic pollution” from breeding experiments, scientists have warned.

South African game farmers have increasingly been breeding novel trophy animals, including some freakishly-coloured varieties such as the black impala, golden wildebeest or pure-white springboks.

Some hunters pay more to bag unusual trophies, but now the South African government is under fire for permitting further gene manipulation ventures that scientists say could have a damaging effect on the continent’s wildlife. 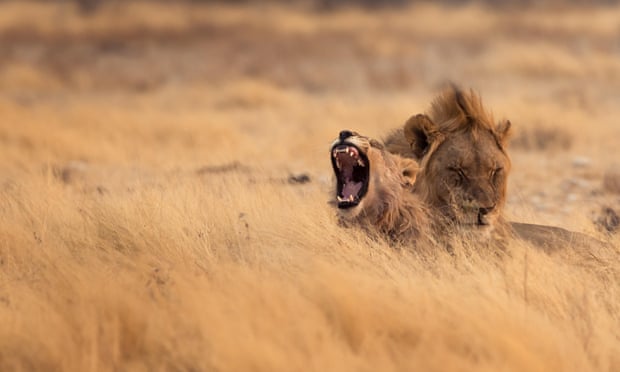 Original photo as published by The Guardian: The South African government is under fire for permitting gene manipulation ventures that could have a damaging effect on the continent’s wildlife. Photograph: Alamy Stock Photo

Writing in the latest issue of the South African Journal of Science, a group of 10 senior wildlife scientists and researchers have criticised the government for quietly amending the country’s Animal Improvement Act last year to allow for the domestication and “genetic improvement” of at least 24 indigenous wildlife species – including rare and endangered animals such as rhino, cheetah, lion, buffalo and several antelope species.

The researchers warn that: “A logical endpoint of this legislation is that we will have two populations of each species: one wild and one domesticated … domesticated varieties of wildlife will represent a novel, genetic pollution threat to South Africa’s indigenous wildlife that will be virtually impossible to prevent or reverse.”

Lead author Prof Michael Somers, a senior researcher at the Mammal Research Institute at the University of Pretoria, says the government should scrap the controversial law amendment which lumps together rare and endangered species such as rhinos with rabbits and domesticated dog breeds.

Somers and his colleagues say the act typically provides for domesticated species to be bred and “genetically improved” to obtain “superior domesticated animals with enhanced production and performance”.

These animals “can also be used for genetic manipulation, embryo harvesting, in-vitro fertilisation and embryo transfers,” say the scientists.

They argue that the law will not improve the genetics of the affected wildlife species but rather will pose ecological and economic risks as it will be expensive and almost impossible to maintain a clear distinction between wild and domesticated species.

Somers and his colleagues say the government did not appear to have consulted either scientists, government wildlife agencies or the general public about the controversial move.

Last year, in response to concerns that the legal amendment would remove the listed species from the ambit of conservation legislation, the government’s environment department issued a statement to emphasise that that game breeders would still have to comply with the National Environmental Management Biodiversity Act and regulations concerning threatened or protected species.

But Somers and his co-authors remain concerned, saying that in the province of KwaZulu-Natal, where there is close cooperation between game breeders and the provincial conservation organisation, the authorities still had difficulty keeping track of what happens on game farms and in enforcing legislation.

The “golden wildebeest” is a novel species derived through the ranching and selective breeding of the common or blue wildebeest (Connochaetes taurinus), much darker animals whose coats are typically a deep slate or bluish grey colour. Moves to allow more intensive genetic manipulation of several wildlife species in South Africa have raised the concern of scientists around irreversible genetic pollution of the original wild species. Photograph: Prof Graham Kerley/Nelson Mandela University

“This new law will add to this difficulty, and will likely be less controlled in some other provinces,” they said, adding that the genetic consequences of intensive or semi-intensive breeding of wildlife species were “negative and considerable”.

Michael Bruford, a professor of biodiversity at the University of Cardiff and co-chair of the Conservation Genetics Specialist Group of the IUCN Species Survival Commission, added his support to the concerns raised. “The Convention on Biological Diversity’s 2020 targets clearly state that signatory countries should minimise genetic erosion (loss of genetic diversity) in domestic, socio-economically and culturally valuable species,” he said.

“However you regard these species – and they cannot reasonably be classified as domestic animals – South Africa’s proposal will very likely lead to genetic erosion, in contravention of the CBD target,” he added. “This proposal also comes at a time of rapid environmental deterioration, when we need to be increasing the resilience of our species by ensuring they retain as much genetic diversity as possible”.