By NewsroomAugust 3, 2021Anti-poaching, Science and technology
No Comments 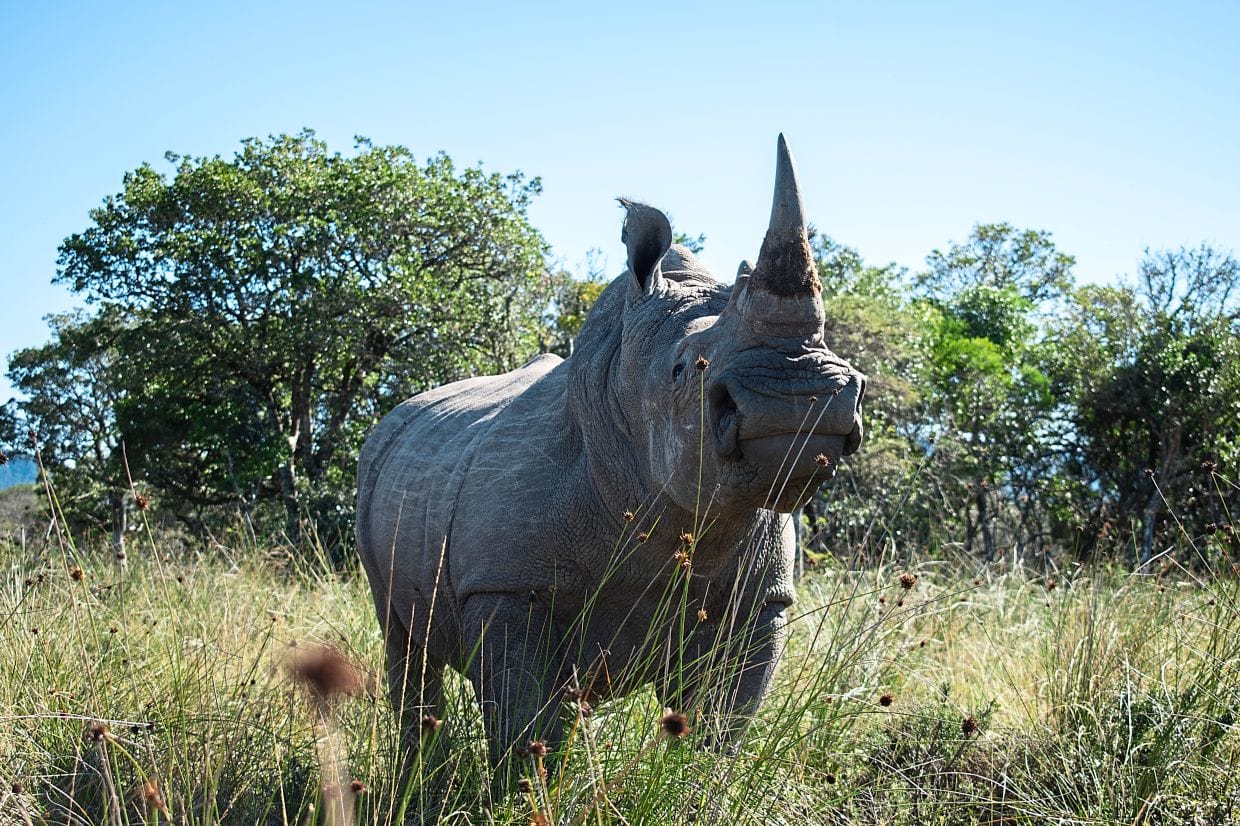 Igor the rhinoceros stands in the Buffalo Kloof Game Reserve in South Africa before he’s due to be injected with an amino acid containing special, non-radioactive isotopes of carbon and nitrogen. Image: As originally published by The Star

To combat the poaching of rhinoceroses, South African animal preservationists are turning to radioactive substances: By injecting a small amount into the animals’ horns, they seek to deter and detect smugglers.

If the animals’ horns are taken through customs at a port or airport, alarms should sound when the substance is detected – a move activists hope will dramatically reduce smuggling.

They are taking an international approach, working with activists and experts from several different countries in what they have dubbed “Project Rhisotope”.

The first rhinos to take part in the project are Igor and Denver, two bulls on a game farm in the Eastern Cape province.

The researchers first want to analyse whether and how the amino acid is distributed, and later they plan to use slightly radioactive isotopes that are easy to detect externally with measuring instruments.

“It’s a very unusual approach: We’re trying to reduce the value of the horn and at the same time make it harder to smuggle,” says Larkin, who heads the university’s radiation and health medicine department. He says injecting just a tiny dose of the amino acid – the size of a ballpoint pen tip – into the horn would suffice.

“The dose is small enough not to harm the animal – now we want to test whether the dose remains in the horn,” he tells dpa.

Researchers will also monitor the two rhinos to see whether any risks or health problems emerge over the coming months.

“We then intend to present a viable concept by September,” Larkin says.

If the concept proves viable, it will be offered to both the government and private rhino keepers.

However, not all animal welfare activists are happy about the project.

It is viewed by the French environmental organisation Robin des Bois as an attempt by the project’s most important supporter, the Russian nuclear authority Rosatom, to expand its influence in Africa.

“This animal experimentation is self-promotion for Rosatom,” it says.

“As early as 2010, similar and unsuccessful attempts were made in South Africa to deter poachers and consumers by injecting so-called indelible dyes and toxic chemicals into rhino horns,” it adds.

The organisation Pro Wildlife is likewise critical of the project.

“There were attempts and announcements years ago to render rhino horn worthless or unusable through paint or even poison, which were unsuccessful and failed to stop poaching,” says spokeswoman Daniela Freyer.

“Radioactivity, however weak, is even more concerning from a health and conservation perspective than these earlier, failed attempts,” she adds.

The number of rhinos killed by poachers in South Africa dropped by a third in 2020, a year marked by the pandemic restrictions.

However, nearly 400 pachyderms died because of their horns.

The issue is drawing increasing attention.

Monaco’s Princess Charlene, who grew up in South Africa, is concerned about the threat posed by poaching to the pachyderm population and has started an initiative focused on the cause called Chasing Zero.

While the trade in rhino horns is banned, it remains a multi-million dollar business, according to the UN Office on Drugs and Crime (UNODC). The business generates profits of around US$230mil (RM975mil) dollars every year, according to an estimate by UN experts in the World Wildlife Crime Report.

Rhinoceros horn is popular in traditional medicine in Asia, particularly in Vietnam and China, where it costs about as much as gold.

There are around 20,000 white rhinos and around 5,600 of the highly endangered black rhinos in Africa, according to the World Conservation Union (IUCN).