By NewsroomMay 5, 2020Anti-poaching, Conservation
No Comments

Environmentalists and scientists issued dire warnings this week: Stop environmental destruction and the illegal wildlife trade now — or face another pandemic that could wipe out civilization.

On Monday, Professors Josef Settele, Sandra Díaz and Eduardo Brondizio, along with Dr. Peter Daszak, wrote an article for The Intergovernmental Science-Policy Platform on Biodiversity and Ecosystem Services (IPBES) titled: “COVID-19 Stimulus Measures Must Save Lives, Protect Livelihoods, and Safeguard Nature to Reduce the Risk of Future Pandemics.” 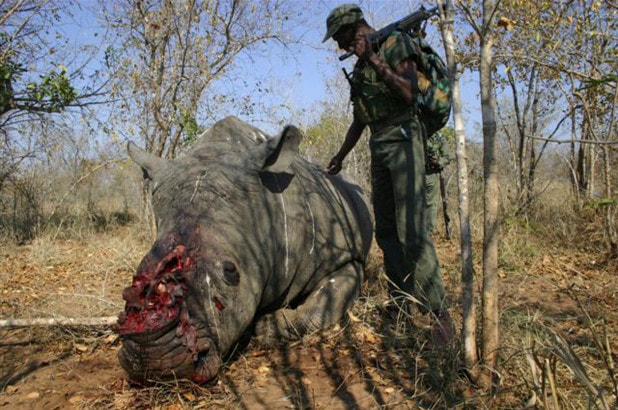 Original photo as published by The New York Post. The corpse of a slaughtered rhino lays on the ground in a national park in South Africa.

The scientists warned that “Rampant deforestation, uncontrolled expansion of agriculture, intensive farming, mining and infrastructure development, as well as the exploitation of wild species have created a ‘perfect storm’ for the spillover of diseases from wildlife to people. This often occurs in areas where communities live that are most vulnerable to infectious diseases.”

The scientists then pointed out that animal-to-human diseases that already exist, like Ebola, rabies or avian flu, already “cause an estimated 700,000 deaths each year.” Deaths in 2020 will skyrocket due to COVID-19, but if nature isn’t protected and animals aren’t isolated from humans, the next pandemic, they warn, will be worse.

“Future pandemics are likely to happen more frequently, spread more rapidly, have greater economic impact and kill more people if we are not extremely careful about the possible impacts of the choices we make today,” the scientists write.

Peter Knights, the CEO of WildAid, a conservation organization that works to end illegal poaching and consumption of wild animals, agrees. He told the Post: “Sixty percent of infectious diseases originate in animals and are transferred to humans … and the risks are increasing with deforestation and climate change. When someone logs in a rainforest and builds roads into the wild, we come into contact with species we aren’t supposed to. Humans then drive these animals into big cities and sell them at live markets, where the risks increase when you stress these animals or mix these species together.”

Some scientists believe the COVID-19 pandemic started in a wet market in the Chinese city of Wuhan, possibly jumping from humans via bats or perhaps pangolins, the world’s most trafficked animal.

“The way these cross-species jump happened is by mixing species that wouldn’t mix in the wild; they transmit diseases in close contact and under stress,” said Knights, who has started a petition calling for the end of wildlife poaching. “The wildlife trade is associated with disease. SARS [allegedly] came from bats via civets cats; HIV was [allegedly] transferred to humans via the bushmeat trade in monkeys and chimpanzees, and now COVID-19 is believed to come from bats, possibly transferred through pangolins.”

The recent decimation of the tourism industry has led to a huge uptick in poaching, which exacerbates the problem. According to the New York Times: “Heads of poaching gangs in Mozambique are planning to take advantage of reduced ranger patrols and the lack of tourists in Kruger National Park in neighboring South Africa.”

The killings affect multiple generations, as many of the rhino babies left behind either starve, are killed by other wild animals or end up in a rhino orphanage.

Even more poaching recruits are expected to sign up in the coming months.

“African countries are in dire economic straits,” Knights said. “There are a lot of unemployed people, and without tourists on safari or people working in lodges, you have less surveillance. We’re very concerned that is what is leading to the poaching spike.”

Knights and his team have been working non-stop with the governments of China and Vietnam — the largest procurers of illegally poached animals and animal parts — to try and stop this trade at the source.

“There is a demand from China and Vietnam for these exotic animals as they have traditions of eating wild animals. The size of their economies fuels a large trade,” Knights said. “But the governments are much more ready to act now than they were five years ago.”

In January, China imposed a ban on all farming and consumption of “terrestrial wildlife of important ecological, scientific and social value,” which is expected to be signed into law later this year.

After conservationists sent an open letter to Vietnam’s prime minister recommending action against the wildlife trade as a means of preventing future outbreaks of disease, that country — where wildlife restaurants have bats, civet cats, snakes, bear, monkeys and pangolins on the menu — is also looking to stop importing imperiled animals to eat.

And recently, both China and Vietnam introduced airport detection systems that can help expose someone trying to smuggle in animal parts. It’s already helped in efforts to curb the ivory trade: In early April, 11 large rhino horns were seized in Vietnam after a flight from Hong Kong was diverted from Ho Chi Minh city to Can Tho.

“Many people in China [and Vietnam] find this illegal wildlife trade as abhorrent as everyone in the west,” Knights said. “When the coronavirus broke out there was a tremendous uproar. But in a country of 1.4 billion, you don’t need that many bad actors to have (a huge impact).”

Paula Froelich is the founder and editor of the online travel magazine for women, A Broad Abroad. Instagram @pfro.