By NewsroomOctober 1, 2019Conservation
No Comments

The oocyte was successfully harvested in an extraction process by Prof Thomas Hildebrandt and his team and taken to the Reproductive Innovation Center for Wildlife and Livestock at Faculty of Sustainable Agriculture, Universiti Malaysia Sabah (UMS) in Sandakan. 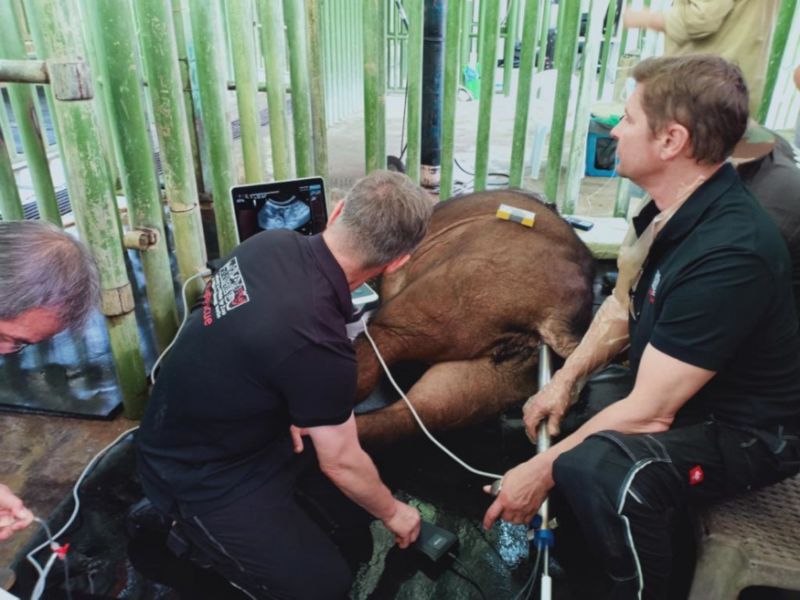 Original photo as published by Yahoo News: The egg harvest in progress, undertaken by a team of German scientists — Picture from Sabah Wildlife Department

“This is great news. It would have been even nicer with more oocytes, but this does allow us to continue with the programme to try to make in vitro embryos of this critically endangered species,” said Sabah Wildlife Department director Augustine Tuuga.

The harvesting of the cell means that in vitro fertilisation can be done by combining Iman’s egg and sperm cells from a male Sumatran rhino that was previously under the care of the Borneo Rhino Alliance here.

Preparation and maturation of the oocyte is now being handled by experts from Bogor Agriculture University in Indonesia. Prof Arief Boediono said he will be using thawed frozen sperm from Tam, who died in May this year of renal failure, for the in vitro fertilisation attempt.

Tuuga said that the team was keen on collaborating with Indonesia again for future attempts.

Meanwhile, UMS’s Faculty of Sustainable Agriculture dean Professor Abdul Hamid Ahmad said he was pleased with the technology used in the attempt.

“The Reproductive Innovation Centre is now open for use, and I am pleased that this in vitro attempt will be made here,” he said.

However, Borneo Rhino Alliance executive director Datuk Junaidi Payne said that although the effort was tremendous, it would realistically not be able to save the species from eventually going extinct.

“There are simply not enough wild Sumatran rhinos left alive to save the species. Advanced reproductive technology can ensure that the living genomes of those rhinos are kept alive long after their deaths.

“This attempt in Sabah is great but yet another wasted opportunity — if Indonesia had agreed to provide fresh semen from one of their three young males, the chance of success this time would have been greater,” he said.

He explained that for the embryo to develop, it requires a surrogate mother, of which Malaysia has to rely on Indonesia for, with its four female Sumatran rhinos in captivity.

According to Payne, Iman, now in her 20s, has suffered a tumour in her uterus, which makes it difficult for a pregnancy to develop and therefore, artificial insemination on Iman would be futile.

“Iman is not fit to get pregnant, but has a normal menstrual cycle producing one or two eggs every month,” he explained.

Malaysia and Indonesia are expected to sign a memorandum of understanding on Sumatran rhino conservation soon.

The collaboration with Indonesia has been in the offing for years, but has never come to fruition.