By NewsroomOctober 19, 2021Conservation, Rescue and rehab
No Comments 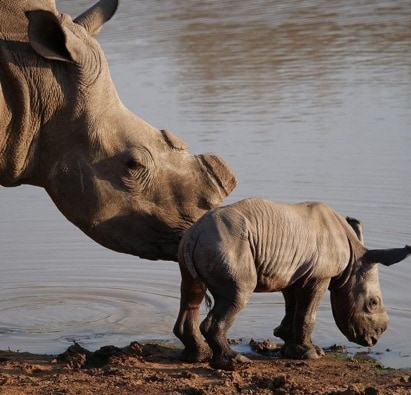 A re-wilded rhino orphan has just given birth to her own wild calf. Image: Kim Colson Safaris.

Masingitta was one of the first five rewilded orphans Rhino Revolution released back into the wild in 2017. Her name means “miracle” in Tsonga, and she arrived at the Orphanage in 2015, after her mother was murdered by poachers

She was given this name as it took a very long 24 hours to track and find her, after her mother was killed by poachers. She arrived at the facility by helicopter, very traumatised and only three months old.

She joined a crash of four other orphaned rhino calves. Nicknamed “The Lucky Five”, these rhinos were all victims of poaching, their mothers killed for their horns. They were rescued and rehabilitated by Rhino Revolution over a period of two years – the calves arriving from different reserves and at different ages.

Last year, an adult wild white rhino bull was seen following the Lucky Five and mating with Masingitta. At approx. five and a half years of age, Masingitta was now old enough to breed. We had hoped she might be pregnant, as when she was dehorned last year, a pregnancy test was undertaken – and she was beginning to look very wide!  But as a white rhino’s pregnancy is 16-18 months, we couldn’t be sure when she would give birth.

The tiny calf was spotted just days ago!  From a quick scan with the binoculars, we think the calf is a female, which is the best news ever.  She has been named Lesedi, which means Light in Tsonga. Out of the miracle (Masingitta) comes light (Lesedi).  May this light shine bright and give us all hope for the future of Africa’s iconic rhino.

Rhino Revolution has fulfilled its ethos of true conservation. The re-wilding process is complete: an orphaned rhino is back in the wild, and having mated with a wild white rhino, has produced the next generation of wild rhino.

With the catastrophic decline in numbers due to poaching, every rhino counts. This precious new calf contributes valuable genetic diversity.

“We are extremely proud of this wonderful news. A glimmer of hope in the battle to save Africa’s rhino” Anna Mussi, Manager, Rhino Revolution.

These are critical early days for a new mother. Our priority is now to protect her privacy as she bonds with her new calf.