By NewsroomJanuary 18, 2021Communities, Education
No Comments 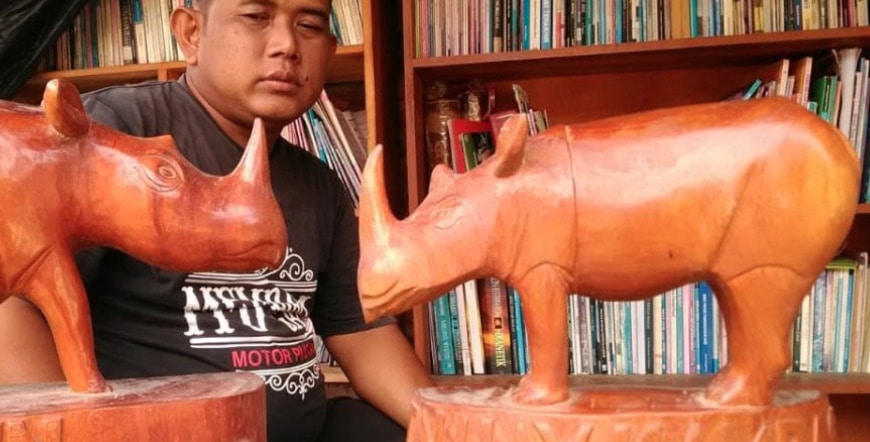 Local communities in a Sumatran rhino stronghold are benefiting from a creative economy built up around the conservation of the critically endangered species. From collecting leaves to feed the rhinos, to selling wood carvings and wildlife-themed batik clothes, communities living around Way Kambas National Park are developing new income streams. Image: Mongabay

EAST LAMPUNG, INDONESIA: It’s early December and Sujiono is busy trimming the branches of a ficus tree in his village in Sumatra’s Lampung province. It’s not your typical pruning session: the 41-year-old is collecting the leaves for the rhinos at the captive-breeding center at nearby Way Kambas National Park.

“This is what my job’s like, looking for food for the rhinos at the SRS,” Sujiono says, referring to the Sumatran Rhino Sanctuary, home to seven individuals of the critically endangered species.

The Sumatran rhino (Dicerorhinus sumatrensis) is the only living species of the most primitive rhino genus, one that evolved 15 million to 20 million years ago and includes the prehistoric woolly rhino in its lineage.

Habitat loss, climate-induced habitat fragmentation, and poaching have significantly slashed the species’ population, with current estimates at fewer than 80 individuals. One of their last strongholds is Way Kambas National Park, where the SRS runs a captive-breeding program to shore up the flagging wild population.

Sujianto, who lives in Labuhan Ratu IX village near the park, has been fetching the leaves that make up an important part of the rhinos’ diet since 2006, when the sanctuary housed just three rhinos. Every morning, before the animals’ 11 a.m. breakfast time, he delivers at least 90 kilograms (200 pounds) of leafy branches: ficus, jackfruit, macaranga, breadfruit, lamtoro, and mango. He’s paid for the job, but says “the survival of the rhinos is what we hope and sincerely pray for.”

Fellow villager Kasturi gathers the larger boughs left over from the branches that Sujianto trims, and makes wood carvings and busts of the rhinos out of them.

“It takes patience to make them because I’m still learning,” he says.

Lampung is also home to a rich tradition of making batik, a form of hand-dyed textiles in which beeswax is applied in intricate patterns to mask the parts of the cloth not being dyed. Some local communities produce batik clothes with rhino motifs.

“We want to promote the pride and icon of Lampung province so that it will be more widely known,” says Basuki Rahmat, who heads a local group of batik artisans.

“This business has created jobs, especially for women who don’t have a main source of income,” Basuki says.

For many living in the vicinity of the rhino sanctuary, the facility has opened new sources of income and even opportunities for small and medium businesses. The management of Way Kambas National Park and the SRS have partnered with neighboring communities to develop a creative economy inspired by the rhinos.

“The benefit of the Sumatran rhinos sparked an inspiration for the small and medium businesses in the villages near the park,” says Junaidi, the head of the Lampung provincial tourism department.