By NewsroomJuly 23, 2020Artificial reproductive techniques, Science and technology
No Comments 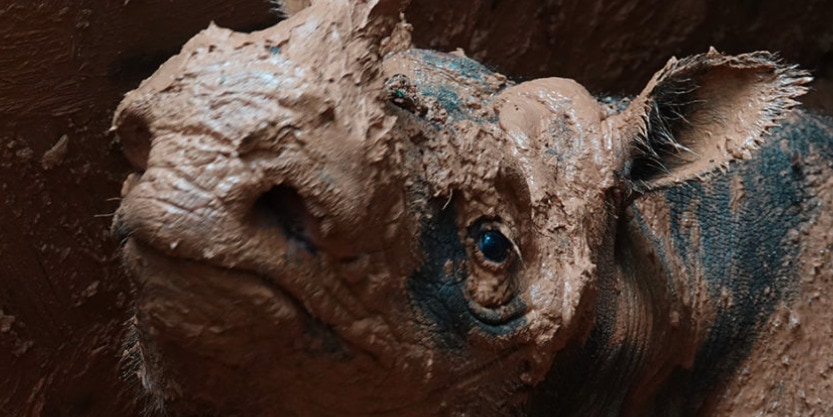 Female rhinos in captivity have been found to develop reproductive problems and infertility as a result of prolonged absence from a male, and conservationists fear this could happen to the rhino currently in captivity. The Sumatran rhino is critically endangered, with fewer than 80 believed to be remaining in the wild. (Original photo as published by Mongabay.)

SAMARINDA, INDONESIA: A wild Sumatran rhino that conservation officials in Indonesia plan to catch next year for a captive-breeding program in Borneo has been identified as a female.

The news is important because Indonesia already has a female Sumatran rhino (Dicerorhinus sumatrensis) at its Kelian Lestari sanctuary in the Bornean province of East Kalimantan. The addition of another female would thus further delay efforts to naturally breed the female already in captivity, named Pahu. Female rhinos in captivity have been found to develop reproductive problems and infertility as a result of prolonged absence from a male, and conservationists fear this could happen to Pahu.

There are currently only three males in captivity, all of whom are all first-degree relatives living at another sanctuary in Way Kambas National Park on the island of Sumatra.

In early July officials announced that they had targeted a rhino for capture and named it Pari, but did not say whether it was female or male. Sunandar Trigunajasa, the head of the East Kalimantan conservation agency, confirmed recently to Mongabay that “Pari is a female rhino, and will accompany Pahu at the Kelian sanctuary.”

He added, “Even though rhinos are solitary animals, they still need a friend.”

Sunandar said his team would beef up protective measures for Pari in the wild until officials and experts could safely capture her. “East Kalimantan is still not COVID-19-free, but we can’t just stay put. We have to prepare Pari ahead of the translocation plan,” he said.

According to the government, Pari is one of three wild Sumatran rhinos that conservation experts and officials have identified and been monitoring in East Kalimantan. The species is critically endangered, with fewer than 80 believed to be remaining in the wild. Of those, fewer than 16 are believed to inhabit three known sites in Indonesian Borneo.

Removing a wild Sumatran rhino to a sanctuary requires stringent safety procedures to ensure the animal’s well-being. The first rhino caught in East Kalimantan, a female named Najaq, died within weeks of her capture in 2016, prompting criticism of poor management in the execution of the operation. However, the rhino is believed to have died from complications to an injury she sustained before being captured.

Conservation officials have characterized their mission of capturing Borneo’s last remaining wild rhinos as a way of saving the animals, given the rapid rate at which their habitat is being lost to oil palm plantations and coal mines. Pahu, captured in 2018, now lived in a high-security zone under constant monitoring by a group of veterinarians. She is also being prepared for both natural and artificial breeding attempts to produce rhino calves.

Sunandar said his team was working to gain more support from local communities and authorities in Mahakam Ulu district, where Pari is known to roam. Officials previously said the search for rhinos there had been hampered by locals who refuse to allow any rhinos captured in their area to be moved to the Kelian Lestari sanctuary. They have demanded authorities build another facility in the same area where the rhino is found and captured.

“Coordination is needed considering translocating Pari requires a lengthy and prudent preparation so that it’ll be successful,” Sunandar said.

The species has been driven to the edge of extinction by habitat loss, with Sumatra and Borneo losing vast swaths of forest to oil palm plantations and coal mines, as well as poaching. Now, with a dwindling number of rhinos scattered in fragmented pockets of forest, conservationists cite a low birth rate as the primary threat to Sumatran rhinos’ survival.