OTJIWARONGO: A 40-year-old suspected rhino poacher on Sunday exchanged gunfire with a team of 15 Namibian Police Force (NamPol) officers and members of the Namibian Defence Force (NDF) for nearly two-hours on a farm outside Otavi.

The Otjozondjupa Regional Crime Investigations Coordinator, Deputy Commissioner Naukalemo Andreas, in an interview with Nampa on Monday, said the exchange of gunfire started at about 12h00 on Sunday and ended at 14h00 after the suspect allegedly abandoned the hunting rifle he was using. 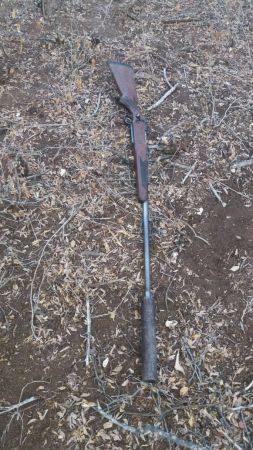 Original photo as published by Lelamobile.com.

Andreas said the suspect was spotted walking by farm workers on Farm Streben, situated less than 40 kilometres southwest of Otavi, at about 12h00, allegedly armed with a hunting rifle and two butcher knives.

The farm workers then alerted NamPol at Otavi, who then also called in other police officers from Kombat for back-up.

Their joint police team then followed the suspects’ footprints on the farm.

At a distance, the poacher first spotted the police officers and opened fired in their direction, said Andreas.

The suspect thereafter started running with a plan to escape on foot inside the farm, but the NamPol officers then called in an NDF helicopter, which also joined the pursuit of the suspect.

At about 23h00 on Sunday, the suspect was finally arrested and was allegedly found in possession of a piece of a rhino horn, ammunition, and a water container at Farm Marula, which is adjacent to farm Streben.

Andreas said no injury was recorded in the gunfire exchange.

The suspect, who is believed to be from the Kavango West Region, is expected to appear on Tuesday in the Otavi Magistrates Court on charges of hunting specially protected game, possession of rhino horns and an unlicensed firearm and ammunition. A charge of attempted murder for firing at the police officers in uniforms has also been added.