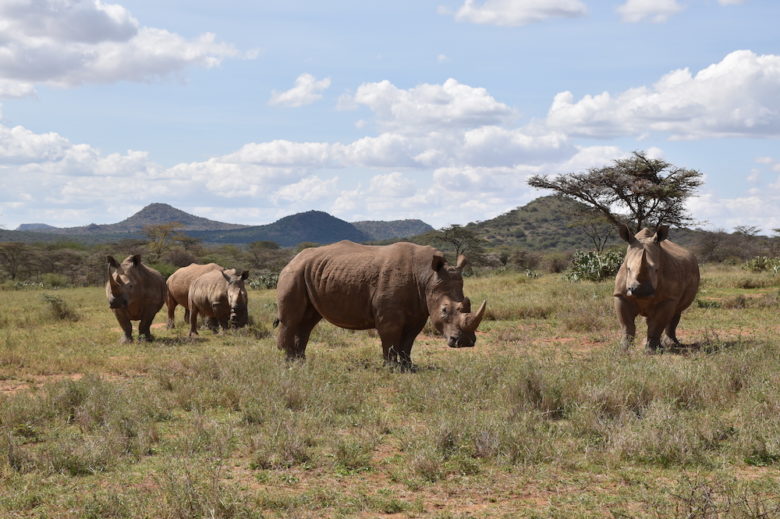 When we try to protect rhinos we often work to deter poachers from entering a reserve or park, but how do we keep rhinos inside a (very large!) area to make sure they’re safe? When rhinos need to stay in one place, how can we make sure that these majestic and powerful animals remain inside a boundary? One recent project at Ol Jogi Conservancy in Kenya has focused on just that.

One particularly mischievous white rhino bull was repeatedly breaking through one area of of Ol Jogi’s wooden posts. This was making things tougher for Ol Jogi’s security team and costing a large amount of time and resources to bring him back safely and repair the broken posts. Of course, the solution seems simple: a bigger, stronger fence! But alas, this wasn’t quite the answer.

Ol Jogi is not just home to black and white rhinos, it is also an incredible habitat for countless other species of African wildlife. Unlike the rhinos, which have to stay in one place to remain under tight security, other animals need to be able to migrate through vast landscapes. To allow for this movement while keeping animals and people safe, wildlife corridors must be created. Wildlife corridors connect habitats together, providing a route between areas that may otherwise be separated due to human activities (such as roads and villages etc.).

Original image as posted by Save The Rhino

Before the white rhino bull broke through the posts, this boundary was keeping rhinos in one area, while allowing other animals to move throughout. Now, thanks to your donations, Ol Jogi has been able to ‘rhino-proof’ its corridors. To strengthen the boundary, wooden posts were replaced with concrete posts made on site. So far, this latest formula is proving successful at containing the bull and the other rhinos at Ol Jogi, and giving elephants, zebra, antelope and many other species the ability to migrate when necessary.

Keeping an eye on the boundary lines and wildlife corridors is important to reduce poaching attempts. Through regular patrols and using available technology, Ol Jogi’s security team is able to better understand exactly what’s happening at its borders. In 2019, thanks to donations from many of our incredible supporters and partners, the team at Ol Jogi began to implement a CCTV system on the corridors, using the remote cameras to provide up to date information to the security team. Since implementation, the cameras have already documented countless wildlife crossings and flagged a number of issues with people using the corridors. With this extra insight, Ol Jogi’s team can now not only keep a closer eye on the wildlife within its boundaries (and know that rhinos are safely protected inside), but also react quickly to any potential security breaches.

Unfortunately, while the global trend shows that rhino poaching is decreasing, the risk at Ol Jogi remains high. Ol Jogi has continued to maintain zero-poaching for 60 months, with the last poaching case in March 2015, but this positive record doesn’t mean that there is time to relax: in December 2019, two Southern white rhinos were poached at neighbouring Lewa Wildlife Conservancy. Until then, Lewa had not lost a rhino to poaching for the previous seven years.

With your support, we can help Ol Jogi to keep doing these critical activities safely, so that the brave men and women on the frontline can keep doing what they do best: protecting rhinos. Thank you! 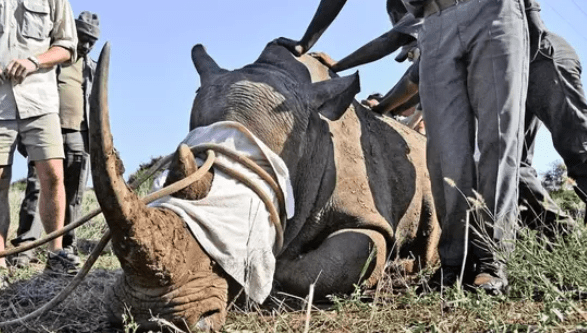 Nearly 8000 rhinos have been poached in South Africa over the past decade. That’s according to the Stop Rhino Poaching NPO, a local website dedicated to raising awareness and support for the war against rhino poaching.

Original photo as published by IOL: Since strategies were put in place in 2014, there has been a decrease in the number of rhinos poached. – Armand Hough African News Agency (ANA)

For the past few years, government and environment organisations alike have been working tirelessly to curb the poaching crisis, while attempting to preserve and grow existing numbers of the endangered animals.

In 2014, the Cabinet adopted the Integrated Strategic Management of Rhinoceros approach to draw together the work of the Department of Environmental Affairs together with the Justice, Crime Prevention and Security Cluster and Agencies.

“We will need to wait for the official figures from Environment Minister Barbara Creecy to be released, but all indications are that there will have been a further decrease in poaching for 2019,” said Serfontein.

She said the dip in poaching figures has been due to a collective approach in the fight against poaching. “From the ranger on the ground working tirelessly to protect rhinos, to the magistrate or judge that takes a firm stand against poaching with a good sentence Along this chain are reserve staff, security personnel, law enforcement officials, prosecutors and myriad other people that include reputable NGOs and their donors.”

Going into a new decade, Serfontein said there would be continued efforts to further preserve rhinos.

Technology has also seen a rise of video technology security solutions to assist in anti-rhino poaching methods, including drone technology.

From January to December 2018, the National Prosecuting Authority (NPA) obtained convictions in 78 of the 82 rhino poaching cases.

As of September, 318 rhino had been poached in South Africa.