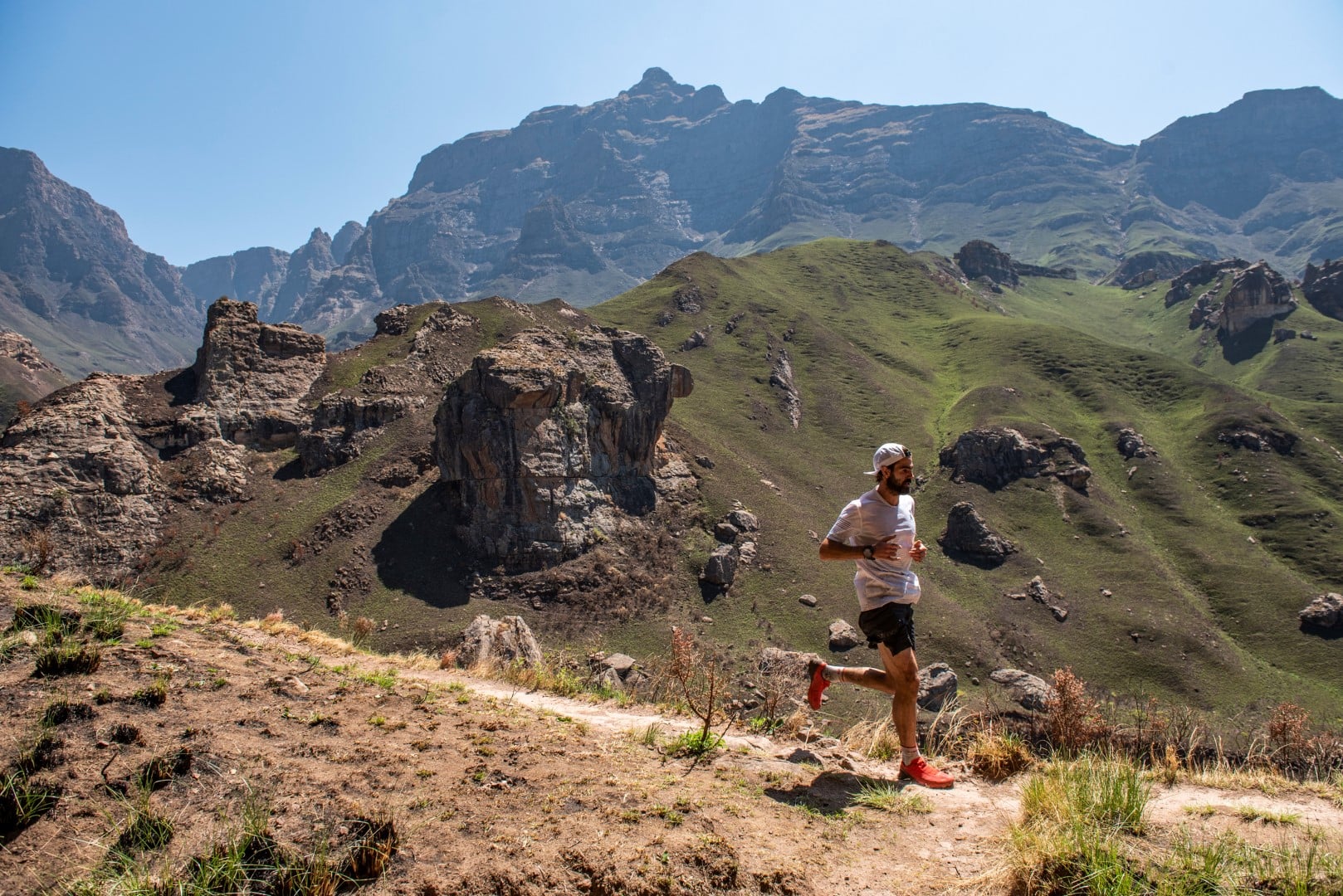 Perfect weather conditions and strong small field of elite runners combined to see the Fastest Known Time (FKT) record for the Rhino Peak Challenge smashed on Saturday by Kane Reilly, while the event set a new record for funds raised for wildlife conservation.

Reilly came into the event as the current record holder, and with hardly any wind blowing and clear and warm weather predicted for the tough outing, he fancied his chances of lowering the FKT for the 23,5 kilometre round trip from the Ezemvelo office above Drakensberg Gardens hotel to the Rhino Peak summit and back.

The fact that he had a fired up Johardt van Heerden, fuelling the fiercely competitive rivalry between these two trail-running pacesetters this season, helped contribute to Reilly’s record breaking run.

Original photo as published by Northglen News: Elite race winner Kane Reilly descends from the Rhino Peak (in the background) at the 2019 Rhino Peak Challenge in the Southern Drakensberg on Saturday. Reilly broke his own FKT record for the 23km outing. (PHOTO: Anthony Grote, Gameplan Media)

Reilly reached the summit of Rhino Peak two minutes clear of van Heerden and enthused about the brutal ascent that had slowed down all the other fundraising athletes who left two hours earlier in the morning.

Reilly flew down the return leg to reach the finish in two hours and seventeen minutes, shaving three minutes off his own record.

The event is a fundraiser involving elite athletes, people of influence and so-called ‘everyday heroes’, each striving to raise money through personal pledges and offering an assortment of prizes to those that contribute.

In the previous years the event has raised just over R1 million, and this year’s record of R834 596, exceeded the previous annual fundraising record by a massive margin.

The event raises money for rhino conservation as well for the conservation of the endangered species that live in the Southern Drakensberg like the Bearded Vulture and the various crane species. 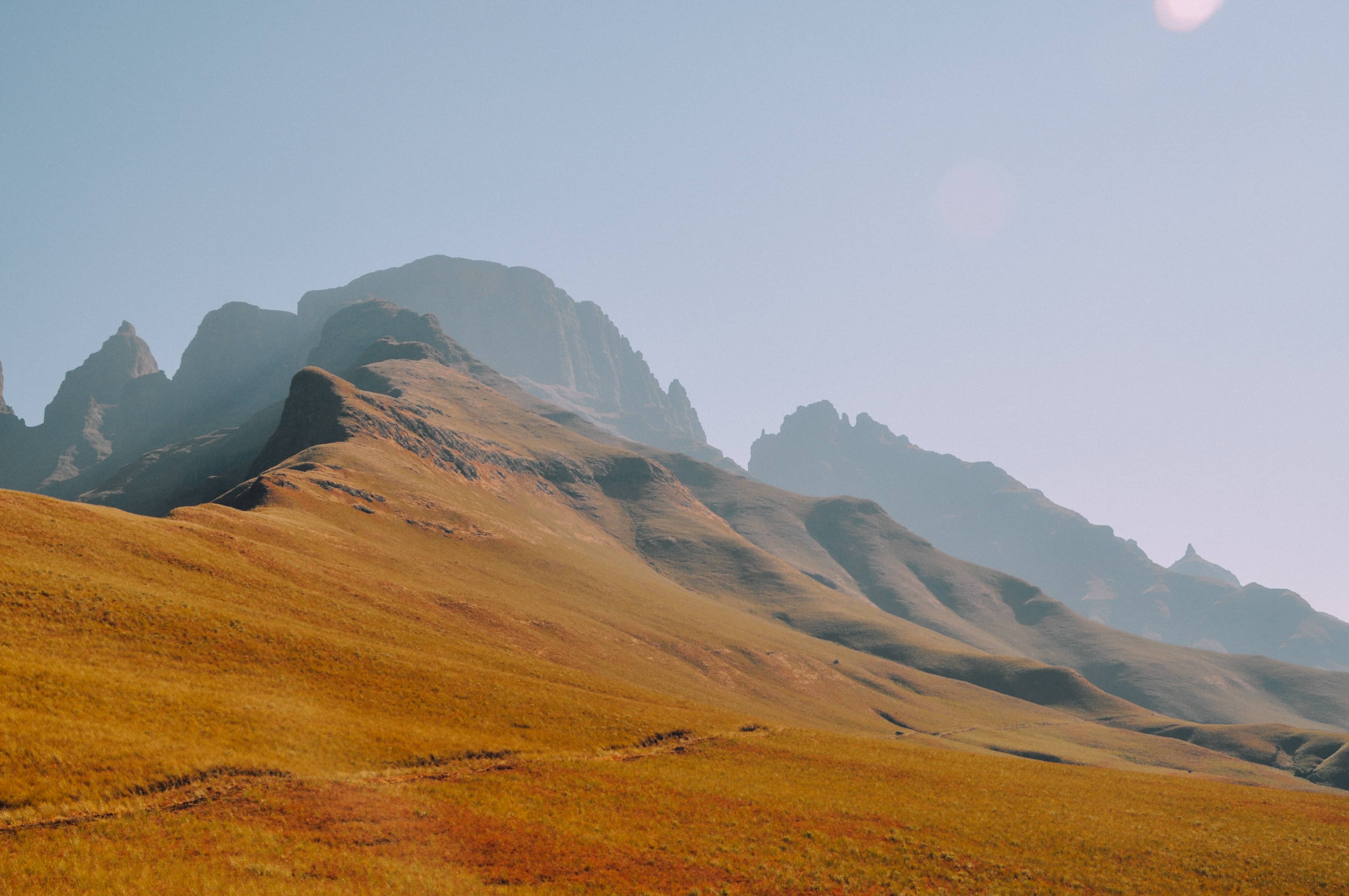 UNDERBERG: Decorated ultra-trail runner and South African icon Ryan Sandes will be taking part in the 2019 Rhino Peak Challenge on October 5 as part of Team Salomon, in a bid to raise as much money for rhino conservation as well as the conservation of the endangered vulture and crane species that call the Southern Drakensberg home.

Sandes, who is known largely for his ability to run long distances, will not be running the event to try and break the fastest known time (FKT), but rather he will be running with Underberg local Andrew van Rensberg as part of a competition that the event has run in the build-up to the 2019 RPC.

The Red Bull/Salomon athlete will be coming into the event looking to enjoy the time out in the Drakensberg along with like-minded people all putting their heads together for a common goal.

“I think the thing I am looking forward to the most is the social aspect of the event,” Sandes said. “Being in the mountains and having a good time for a cause and sharing the experiences afterwards.

“The unique thing about trail running is the interaction that you have with fellow runners and stake holders.”

“From being able to travel all over the world I have been fortunate enough to see some amazing places.

“Being a new father, I want my son Max to be able to show his kids the environment in the same condition that have been able to see it.

“It’s up to everyone to play their part and try and make a difference!” he added.

Sandes is familiar with the Drakensberg and Rhino Peak and puts running in the Berg as one of the most unique running experiences you can have.

“Running up Rhino Peak is really spectacular and the Drakensberg is a mountain range that is quite unlike anything I have seen anywhere else. I think the closest that comes to it would be one or two areas in South America.

“It’s so remote and wild, rugged and hostile yet incredibly beautiful.

“When you are up on the escarpment you see how remote it actually is and I see it as food for the soul and the solitude gives me a space to detach from everything.”

For more information go to www.rhinopeakchallenge.co.za.