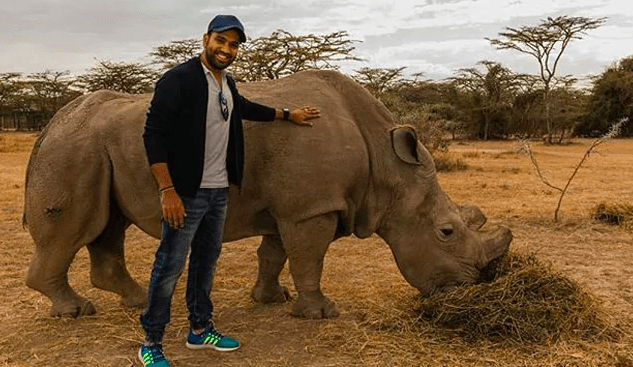 On Thursday, Ol Pejeta Conservancy revealed in an Instagram post that Mumbai Indians cricket team captain Rohit Sharma and wife Ritika Sajdeh had visited the conservancy four years ago to meet Sudan and made a “significant donation” to their rhino conservation programme.

They said that thanks to Rohit’s huge following in India and the world, Sudan’s story reached many, adding that the 32-year-old cricketer is actively associated with animal protection.

Original photo as published by Ndtv.com: Rohit Sharma with Sudan at the Ol Pejeta Conservancy in 2015. (Source: Instagram)

“Rohit and his wife Ritika came to Ol Pejeta back in 2015 to meet Sudan, the last male northern white rhino in the world,” wrote Ol Pejeta Conservancy on Instagram, sharing three pictures from the visit. Two of these pics show Rohit posing with the rhinoceros, while the third shows him and Ritika smiling for the camera.

The pics were re-posted by Ritika Sajdeh on Instagram this morning:

Her post has collected over 50,000 ‘likes’ in a matter of hours. “The best thing on internet today,” wrote one person in the comments section. “Awesome,” said another.

Sudan, the world’s last surviving male white rhino, died on March 19, 2018, at the age of 45. Sudan had previously lived at the Dver Kralove Zoo in the Czech Republic before being transported to Ol Pejeta Conservancy in 2009. The conservancy made the decision to euthanise him due to the rapid deterioration in his condition.

Rohit Sharma had shared an Instagram post for Sudan at the time, writing: “Rest in peace Sudan, you deserved so much better.”

In September this year, Rohit also joined World Wide Fund for Nature (WWF) India and Animal Planet in an attempt to protect the greater one-horned rhinoceros or the Indian rhino.

“It is our duty as co-inhabitants of this planet to try and protect other species that walk this planet, alongside us. The future is in our hands and we should do whatever we can to ensure that our children are able to enjoy the rich bio-diversity this world has to offer,” Rohit Sharma said. 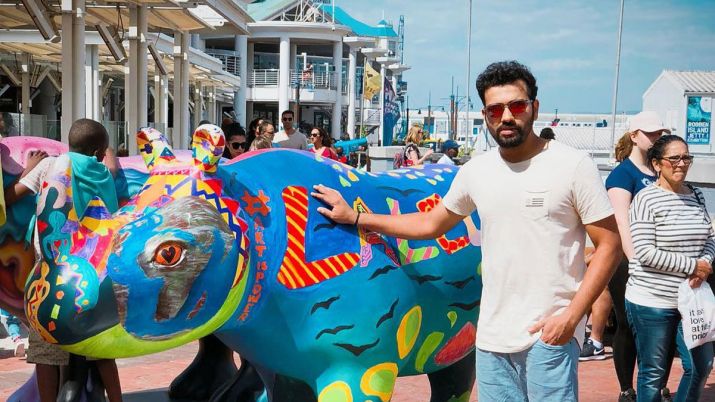 Rohit Sharma takes stance to save this ‘vulnerable’ species from extinction

Indian batsman Rohit Sharma is launching the Rohit4Rhinos campaign, in partnership with WWF India and Animal Planet, to help build awareness for the need to conserve the Greater One-Horned Rhinoceros or the Indian Rhino.

In a campaign launching on Animal Planet to commemorate World Rhino Day on September 22, Rohit has pledged to do his bit to save the “vulnerable” species from extinction.

“It is our duty as co-inhabitants of this planet to try and protect other species that walk this planet, alongside us. The future is in our hands and we should do whatever we can to ensure that our children are able to enjoy the rich bio-diversity this world has to offer,” said Rohit.

“I hope that this campaign will inspire others to come forward and join Animal Planet, WWF India and I in this endeavour to save the greater one-horned Rhinoceros.”

Original photo as published by Indiatvnews.com: Rohit Sharma takes stance to save this ‘vulnerable’ species from extinct. (Image source: @ROHITSHARMA45/INSTAGRAM)

Of the estimated 3,500 Indian rhinos left in the world, 82 per cent are found in India. Once found abundantly across the Indus, the Ganga and the Brahmaputra river basins, the animal is now found only in select pockets in Assam, West Bengal, Bihar and Uttar Pradesh.

The state animal of Assam, the Indian rhinoceros faces several threats, including poaching, habitat loss and mass mortality from in-breeding and disease.

The 32-year-old joined WWF India as its brand ambassador for Rhino Conservation in 2018. With Animal Planet now joining the cause, the team has set out to create awareness and sensitise India about the species and the need for its conservation.

“Discovery has long been committed to telling the stories and protecting the creatures that make our planet extraordinary. We remain steadfast to leverage the brand strength of India’s leading wildlife channel Animal Planet to galvanize people power for the cause of endangered species,” said, Megha Tata, Discovery Managing Director – South Asia.

“WWF India would like to thank Rohit Sharma for being the voice of conservation and for his continuous support in raising awareness about the greater one-horned rhinos. Decades old stories of rhino conservation success in India need to be told and we believe that the campaign #Rohit4Rhinos being implemented in partnership with WWF India and Animal Planet will also be able to bring attention to the challenges that conservationists face in protecting the species,” said, Dipankar Ghose, Director, Species and Landscapes, WWF India.