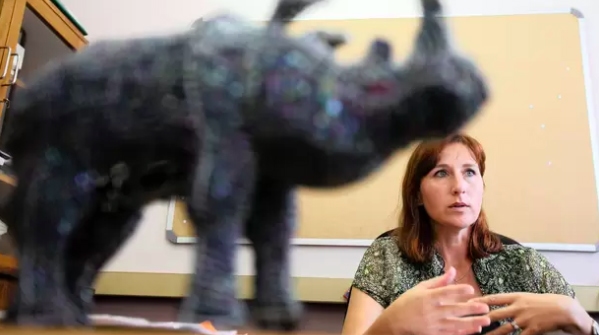 The SA Police Service (SAPS) has not renewed its contract with RhODIS, a groundbreaking forensic prosecution tool that has helped tackle the illicit trade in rhino horn and put poachers behind bars.

RhODIS, the Rhino DNA Index System, is a project initiated by the Onderstepoort Veterinary Genetics Laboratory (VGL) at the University of Pretoria in 2009, to collect and catalogue DNA from rhinos and rhino horns.

Original photo as published by IOL: Cindy Harper, laboratory directory at the University of Pretoria Veterinary Genetics Laboratory speaks about the success of their rhino DNA initiative launched in 2010. (Paballo Thekiso)

It contains more than 20 000 rhino samples from live rhinos, stockpile horns and forensic cases. “In the past, the SAPS Forensics Science Laboratory in Silverton brought the rhino horn straight to us,” said Dr Cindy Harper, of the VGL.

But in 2017, she said, the SAPS issued a tender for the DNA contract, which took six months to award. RhODIS was eventually given the two-year contract for stock theft and rhinos, which expired in July.

“But this time the way it worked was that all investigators must first take their samples to the forensic science lab in Silverton, and then depending on the cases, it went to us… It was a 24-month contract that ended in July and hasn’t been renewed.

“The last case we received from the lab was on July 18. The other cases from then on for rhino and stock theft are still at the lab as far as I’m aware.” This has hampered the finalisation of poaching cases.

“We only received a very small number of actual poaching cases this year so the others are still sitting there waiting, unanalysed. That makes it impossible to finalise (the cases). There’s no DNA reports written for those cases this year.

“Indications are there’s a major backlog obviously on both the stock theft and rhino-poaching cases and the indications are that this needs to be caught up and many of those cases can’t be finalised in court.

“You really need to make sure these things get done as quickly as possible. The backlog is getting bigger. With such an enormous backlog, you will have to put in incredible effort and capacity to catch up.”

The processing of forensic cases at poaching scenes has also been affected. “We started supplying kits for forensics, live rhinos and stockpiles in 2011 but the police stopped using our kits when the contract with the SAPS started in 2017.”

The SAPS developed its own kit. “As far as I’m aware they have now run out of those kits and I’m not sure if they’ve been able to supply new ones.” The SAPS referred the Saturday Star to the Hawks, who did not respond to requests for comment.

The Department f Environment, Forestry and Fisheries did not respond. Kim da Ribeira, of Outraged South African Citizens Against Rhino Poaching, said it was horrified that the processing of forensic samples at rhino-poaching crime scenes in the Kruger National Park had ground to a halt. “The incompetence, bureaucratic bungling and mismanagement that has led to this situation is frightening and wholly unacceptable.

“When will our competent authorities be held accountable for their lack of political will to end the horrific slaughter of these iconic animals, our rhino? We thought rhino poaching was a priority crime. Clearly, it isn’t.

She said enquiries regarding the ability of the SAPS to process evidence gathered at rhino poaching crime scenes in the Kruger were “met with no response, or ‘we will bring it up with the minister next week’”.

“Our rhino don’t have a ‘next week’. We need to know someone with some authority is willing and able to ensure the current issue is addressed.”

She said Department of Environment, Forestry and Fisheries representatives “sat at COP18” and painted a picture of a government department that had a handle on the crisis.

“We were told, in response to a question relating to the length of time it took to capture new samples into the RhODIS system, that the department was aware of the backlog.”

“They explained that this was also due to crime scene matching of DNA samples with database records taking priority over recording of new DNA samples.”

In a paper published in January last year, in the journal Current Biology, Harper explained how DNA evidence is being used successfully to link rhinoceros horns seized from poachers and traffickers in various countries directly to the specific crime scenes where rhino carcasses were left behind.

The work includes a chain-ofcustody-compliant bio-sampling kit and sampling methodology and then had already been used in more than 5 800 forensic cases with links made between recovered horns, bloodstained evidence items and specific rhino carcasses in more than 120 cases.

One case involving three horns and tissues from two carcasses led to a jail sentence of 29 years.