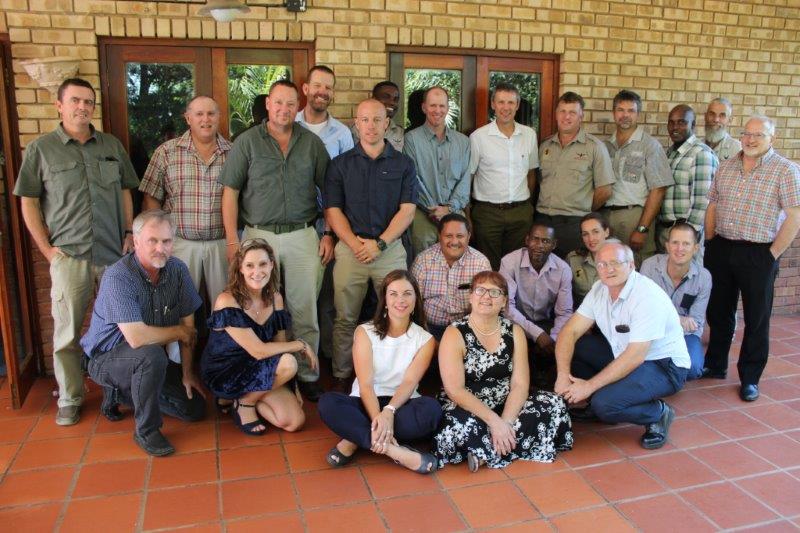 Spear is an acronym for “Stop Poaching Our Endangered African Rhino”. Its main aim is to create awareness and attract funding for the role players on the front lines. The CEO of Spear, Estelle Roe, explained that the greatest assets in the park are the rangers.

The aim of the awards was to credit the rangers, prosecutors, pilots and police officers for their relentless work, but also to bring local businesses into the fight against poaching.

These heroes over the years have fought relentlessly against the onslaught that the Marula South region, also known as the Intensive Protection Zone (IZP), has experienced from rhino poaching syndicates for the past decade.

The rangers were involved in more armed contacts per day than the SANDF soldiers were during the Border War. This team has, through its individual efforts, played a major role in the drastic year-on-year reduction of 48 per cent in rhino poaching since 2016.

Prosecutor Ansie Venter and legal adviser Coert Jordaan were also honoured for their relentless assistance in the fight.

• Albert Smith – section ranger: Malalane
The founder of the highly successful camera trap systems and instrumental in
the development and implementation of other critical technology systems currently in the IZP.

• Craig Williams – section ranger: Pretoriuskop
Personally involved in five contacts in one day. Probably been in more armed contacts than any other section ranger in the history of the KNP.

• Mark McGill – technology operations manager
Best known for his role in developing, deploying and managing the Wide Area Surveillance System or Meerkat in the IZP. In two years the Meerkat was responsible for 45 arrests and the recovery of 15 firearms.

• Sgt Enock Manyike – field ranger sergeant: Malalane
Second-generation sergeant who has been at the forefront of numerous anti-poaching operations. Also the recipient of multiple bravery awards.

• Field ranger Tyson Maluleke – dog handler: Stolsnek
With his K9 partner, Kilalo, in four years have been involved in 61 contacts resulting in 183 arrests and the recovery of 47 firearms.

• Field ranger Derek Maluleke – dog handler: Malalane
He and his K9 partner, Charlie, in two years have been involved in 20 contacts resulting in 34 arrests and the recovery of 15 firearms.

• Charles Thompson – helicopter pilot and air-wing safety officer
Recipient of a bravery award for his flight that saved the life of a ranger who was shot in a contact, and is considered to be one of the best chopper pilots the KNP has had.

• Brad Grafton – helicopter pilot
The first pilot to be shot at by poachers and the only one to be shot at twice, both times saving the aircraft and passengers with his exceptional flying skills.

• Section ranger Richard Sowry – section ranger: Kingfisherspruit
Founder of the free-running pack hounds in the KNP. Persisted with the pack hound concept until a great number of successes silenced the pessimists.

• Johan de Beer – K9 manager: SANParks
Developed the K9 unit at Phabeni. His contribution to the fight against poaching is recognised by all.