By Peter BorchertSeptember 8, 2021Editorial
No Comments 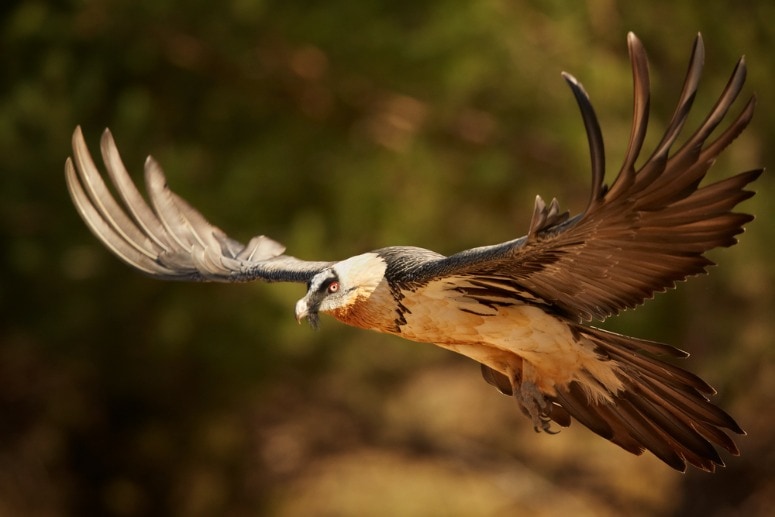 The magnificent bearded vulture, a true denizen of high mountain ranges throughout Africa, Southern Europe, and across the Middle East to the Himalayas. © Martin Mecnarowski/Shutterstock.

I have no head for heights. So, you will appreciate my white-knuckled state as we slipped and slid our way along the tortuous, narrow gravel road winding up the steep rocky flanks of the southern Drakensberg range. This towering escarpment rises sheer from South Africa’s eastern coastal plain, beyond which lies the high plateau of its hinterland. My VW Passat estate, shod with common or garden street tires, was woefully inadequate for the challenge of pulling us upwards over loose pebbles through the odd snowdrift and across the glassy smoothness of frozen mud. My young son was beside himself with excitement, but I found it hard to match his enthusiasm as I tried desperately not to let my eyes wander sideways towards the barrierless edge and the stomach-turning drop into the valley below. Eventually, the road flattened out and with shaking relief, I braked to a halt beneath a rusty signboard reading “Naude’s Nek Pass—Height 6,300 ft.” Made it.

We were there in the early 1980s on a three-week, 2,500-mile family road trip from Cape Town to Mkhuze, a small gem of a game reserve tucked into the northeastern reaches of South Africa’s KwaZulu-Natal Province. Homeward bound, we decided on a whim to take the road less traveled. So, early on the second day of the return journey, we found ourselves in the highlands of the Eastern Cape trying in vain to find the least tooth-loosening path over canyon-like corrugations pitting the dirt road between the small farming communities of Matatiele and Mount Ayliff. A bit farther, at the village of Nqanqarhu, we turned right onto the R396, the track up and over Naude’s Nek. The landscape in this remote region is bleak but beautiful, and the birdlife is incredible, reward enough for braving the route. In addition to some high-altitude specials—the Drakensberg rockjumper, ground woodpecker, and striped flufftail, for instance—there is a chance of seeing all three crane species found in South Africa. And, of course, this is also the domain of the bone-eating bearded vulture with its nine-foot wingspan and striking white, russet, and black plumage. It is a truly magnificent creature, not bald like most vultures, and sports a handsome dark mustache giving it the military-like bearing redolent of a Prussian general.

Reflecting on pleasant experiences is a restful and welcome relief from the decidedly unpleasant, unremitting news about a world in trouble on so many fronts–socially, economically, and ecologically. And happily, this week’s reminiscence is rooted in two closely related and very encouraging conservation developments in South Africa’s precious catchments.

A couple of weeks ago, I wrote about one of South Africa’s most successful and far-reaching conservation projects ever—Working for Water (WfW). Some 27 years since its inauguration, this global standard-setting effort in rehabilitating and caring for vital water catchments is still going strong, the removal of alien vegetation at the heart of its work. In the Matatiele area, WfW focuses on the dense infestations of black wattle, the most widespread invasive alien tree in South Africa. It commonly invades indigenous vegetation, forming ecosystem-choking thickets, particularly along the banks of rivers and streams.

So far, under the WfW initiative, more than 7.5 million acres in South Africa’s precious catchments have been cleared. Furthermore, over 300,000 people in poor rural areas like the Eastern Cape have benefitted directly through employment, as well as via community projects such as hospitals and schools. Currently, more than 42,000 people are employed by WfW across 300 locations throughout South Africa. And though this might not sound that impressive in a country of some 60 million citizens, it is a vital contribution to community well-being and poverty relief. This becomes painfully apparent when you take a closer look at the country’s desperate position at the top of the list of countries with the highest unemployment rates in the world.

According to the Quarterly Labour Force Survey (QLFS), young people, in particular, are battling to find jobs. In the 15–24 age group, the unemployment rate is over 63 percent; a frightening statistic made even more so when you consider that this accounts for nearly 60 percent of all unemployed people in the land. Even for young people who have managed to achieve higher levels of education, the rate is impossibly high—hardly a recipe for future economic success and a harsh reminder of just how critical every single job is, particularly in rural communities. This unhappy position is given further context in the sobering fact that in South Africa, each wage supports 3.5 people on a mere $2.10 per person per day. And this is the median position—anecdotally, in rural areas, a single wage has to stretch to the support of as many as 10-12 souls.

Hopefully, business ingenuity will find a way out of this mess and not be impeded too heavily by the prevailing and pervasive service delivery incompetence that dogs the country. Whatever the path to recovery might be, however, it’s going to be a long and difficult one, made even more so by the added burden of Covid-19, which has all but obliterated a once buoyant and growing tourism industry. Furthermore, any resurgence will inevitably be slowest to arrive in rural communities, so once again, job-providing interventions focusing on restoring ecosystems to their full service-providing capacity will be vital.

Programs like WfW have unequivocally shown how effective they can be, especially when implemented in concert with other initiatives. For example, the rich, water-holding grasslands and wetlands of the Matatiele district are ideal for cattle ranching, which, if well managed, can be compatible with ecosystem restoration. On the other hand, poor farming practices quickly lead to degradation and erosion, a situation that has already led to vast amounts of topsoil being washed into river systems and eventually out to sea. In such circumstances, any dam becomes a silt trap and fails in its ability to save water.

To turn this around, the WWF Nedbank Green Trust, in partnership with Environmental and Rural Solutions (ERS), is funding a farming support project to help communal farmers (the environment and water stewards of the region) manage their grazing practices more productively and sustainably. The best aspects of traditional and contemporary farming practices are combined to ensure a reasonable household income and a healthy, resilient landscape. Furthermore, the costly chain of getting cattle to livestock markets has been cut out. Now the auction comes to the communities, and the farmers participating in the grazing improvement project pay lower commissions to the auctioneers and are also assisted with vaccinating their herds.

A further benefit has been introduced through the EcoFutures initiative to promote environmentally-oriented careers for community members in veterinary science, livestock farming, water technology, and renewable-energy entrepreneurs.

And now, the cherry on top. A new national park is to emerge within this working agricultural landscape, a joint project between SANParks and WWF South Africa. Hopefully, a more evocative name will be found in time, but presently it is simply and rather prosaically known as the NorthEast Cape Grasslands National Park. Three expansion phases are planned for the 74,000-acre conservation area that includes Naude’s Nek along the border between South Africa and the land-locked mountain kingdom of Lesotho.

Private and community landowners in the area will be offered financial incentives if they volunteer to incorporate their land into the park. Alien plant clearing and wetland restoration will become an even greater focus for the area, which means more jobs. And hopefully, as Covid-19 eases and tourism rejuvenates itself, South Africa will have a new, exciting destination rich in wildlife and cultural heritage to offer local and international visitors.

“The beauty of this model is that biodiversity conservation and ecological management will be done in partnership with those who live and work in this area while allowing them to continue deriving benefits from their land through sustainable agriculture and other compatible land uses,” said Dr. Morné du Plessis, CEO of WWF South Africa.

It’s not every day we get to celebrate the birth of a brand-new national park. It is an event to be treasured, particularly for its aim of restoring and nurturing a precious tract of grassland, arguably the most threatened and least protected biome in the world. We’ve already lost more than 90 percent of the planet’s grasslands, mostly to produce our food. And it’s happened frighteningly fast: more land was converted to cropland in the 30 years after 1950 than in the prior century and a half. Hopefully this new gem in our conservation crown—one that has the potential to demonstrate how the needs of people and the planet are indivisible—will flourish to become a model widely replicated throughout Africa.