When planning a safari, tourists rarely book a visit to Mkomazi National Park to see the rare African black rhino, currently classified as critically endangered. The park will introduce rhino tourism in July as an attraction for tourists.

Mkomazi is under the management of Tanzania National Parks (Tanapa). It is located some 112 km east of Moshi town in Kilimanjaro region, between the northern and southern safari circuits.

Tanapa conservation commissioner Allan Kijazi said last week that a special programme has been launched to protect the breeding rhinos in Mkomazi. 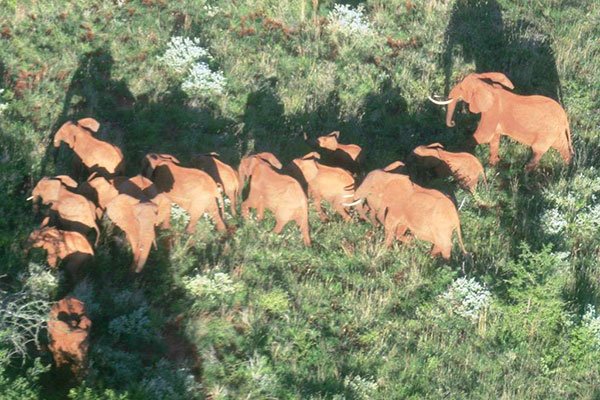 Original photo as published by The East African: Elephants in the Tsavo/Mkomazi ecosystem. FILE PHOTO | NMG

“Mkomazi has been running the rhino conservation project for the past 20 years,” he said.

About Tsh3.5 billion ($1.6 million) will be spent on the conservation project. Rhinos are protected within the fenced 55-square kilometre sanctuary, inside the 3,245-sqaure kilometre park. Tourists can see them more easily than in the wild plains, Mkomazi park warden Abel Mtui said.

Together with Tsavo, Mkomazi forms one of the largest protected ecosystems in the world.