By NewsroomFebruary 11, 2020Uncategorized
No Comments

Technology has been hailed for playing a critical role in the fight against rhino poaching in SA.

This emerged yesterday in a Department of Environment, Forestry and Fisheries report on rhino poaching in the country in 2019.

According to the department, rhino poaching in SA continues to decline as additional steps are taken by government to ensure the crime is effectively dealt with.

The department says in 2018, 769 rhino were killed for their horn in SA. During 2019, rhino poaching continued to decline, with 594 rhino poached nationally during the year.

This decline can be attributed to a combination of measures implemented in line with government’s strategy, including improved capabilities to react to poaching incidents linked to better situational awareness and deployment of technology, improved information collection and sharing among law enforcement authorities, says the department. 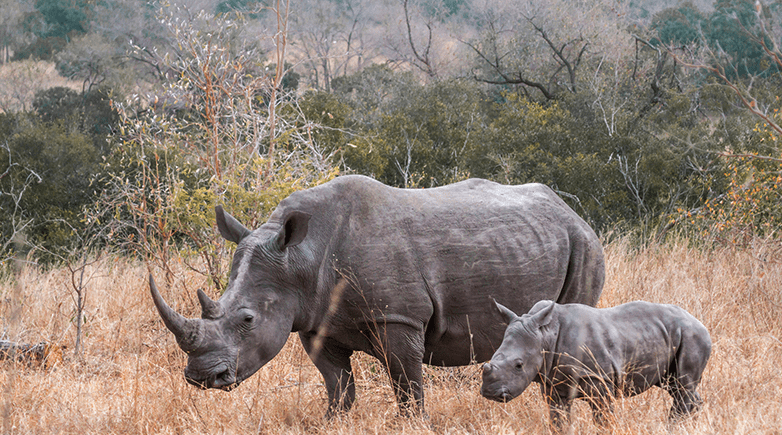 Original photo as published by IT Web.

Solutions galore
Tech companies that have been involved in the fight against rhino poaching in SA include MTN, Cisco, Dimension Data, IBM and Microsoft, among others.

The companies have run a pilot project since November 2015 in a private reserve outside the Kruger National Park, reducing rhino poaching incidents by 96%.

Mobile operator MTN and US-based computing giant IBM deployed an Internet of things solution at the Welgevonden Nature Reserve in Limpopo to improve conservation efforts in and around SA.

Eutelsat Communications and Sigfox Foundation partnered on what they call the “Now Rhinos Speak” project for the protection of the endangered rhinoceros population in Africa.

Using Sigfox’s very low-speed network, the Sigfox Foundation has designed and implemented a remote tracking solution for rhinos that uses GPS sensors fitted in the horn of each animal to send positioning data to a secure online platform via Eutelsat satellite resources.

Law enforcement aspects
Minister of environment, forestry and fisheries Barbara Creecy says the steps to address rhino poaching and wildlife crime across the country are presently aligned to the Integrated Strategic Management of Rhinoceros as well as the principles set out in the draft National Integrated Strategy to Combat Wildlife Trafficking (NISCWT), which will be taken to Cabinet for consideration in the first half of this year.

The NISCWT was a recommendation of the Committee of Inquiry into whether SA should table a recommendation for the legal trade, or not, of rhino horn to the 17th Conference of Parties to the Convention on the Illegal Trade in Wild Fauna and Flora in 2016.

It aims to strengthen the law enforcement aspects of the successful multi-disciplinary approach – the Integrated Strategic Management of Rhinoceros – and broadens the scope to combat other wildlife trafficking, not only rhino poaching.

“Because wildlife trafficking constitutes a highly sophisticated form of serious transnational organised crime that threatens national security, the aim is to establish an integrated strategic framework for an intelligence-led, well-resourced, multidisciplinary and consolidated law enforcement approach to focus and direct law enforcement’s ability supported by the whole of government and society,” says Creecy.

“A decline in poaching for five consecutive years is a reflection of the diligent work of the men and women who put their lives on the line daily to combat rhino poaching, often coming into direct contact with ruthless poachers.”

Despite the 2 014 incursions and poacher activities recorded in the park during the year, a total of 327 rhino were lost as a result of poaching in the Kruger National Park (KNP) during 2019.

With regard to elephant poaching, the department reports that 31 elephant have been poached in SA in 2019 – 30 animals in the KNP and one in Mapungubwe National Park.

This is a decrease in the number of elephant poached in 2018, when 71 were killed for their tusks.

Since the last report on the rhino poaching situation and efforts being made to address the crime, rhino horn samples have been received for analysis from Vietnam to determine if the horns confiscated are linked to crimes in South Africa.

The Hawks have also received good co-operation from China, Hong Kong, Malaysia, Singapore, Vietnam and Japan in their efforts to combat wildlife trafficking.