By NewsroomOctober 14, 2019Science and technology
No Comments

COLLEGE STATION, TEXAS: Rhinoceros don’t roam the prairies of Texas today, and some might not even know they once roamed the Great Plains. But one Texas A&M University student knows about rhinos: she’s identified unique specimens from fossilized remains found in the mountains of Tennessee dating back almost 5 million years.

Rachel Short, a doctoral candidate in the department of ecosystem science and management at Texas A&M University, is part of a team that identified a new species of ancient rhinoceros, Teleoceras aepysoma, from the late Hemphillian-aged Gray Fossil Site of eastern Tennessee.

The genus, Teleoceras, has been described as the “pot-bellied rhinos,” though this new, taller species changes that, and the species name, aepysoma, means “high-bodied,” Short said. Longer front legs and the lack of a nasal horn are only a few of the body features that make this rhino different from other species already identified. 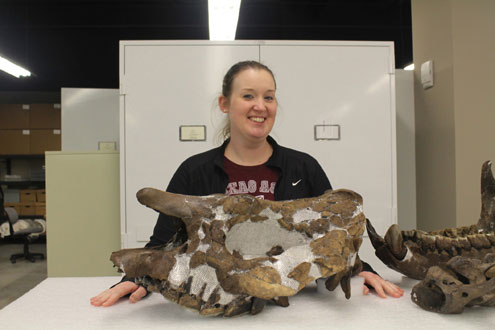 Short recently published her findings with co-authors Laura Emmert with the Don Sundquist Center of Excellence in Paleontology, and Dr. Steven Wallace, professor and curator of the Museum of Natural History, both at East Tennessee State University.

Short and Emmert completed their master’s degrees at East Tennessee in 2013, and Wallace was their advisor. Short said she got involved with the project because of an interest in North American rhinoceroses that started when she interned at Ashfall Fossil Beds State Historical Park in northeastern Nebraska.

According to the new rhino research, the occurrence of Teleoceras aepysoma in the Appalachian Mountains is unique within a genus typically found in the Great Plains.

“Habitat is most likely a major factor in the unique features,” she said. “We suspect the longer forelimbs helped the rhinos browse on shrubs and trees in the oak-hickory forest. It was a forested environment with little grass, and the smaller tapirs would have been browsing on shorter shrubs, so the rhinos would have had to raise their heads higher.”

Short said it was upon the completion of that project and her interest in the unique morphology and habitat of the Gray Fossil Site rhinos that led her to develop questions that turned in to her Texas A&M dissertation.

At Texas A&M, Short works with Dr. Michelle Lawing to investigate trait-environment relationships of hoofed mammals using bones in the ankle and elbow. The shape of these bones is directly tied to the environment in which the animals live, so fossils can be used to understand past environments as well as how animals respond to environmental change.

“We know mammal communities are being severely impacted by environmental changes,” she said. “We can better predict responses to these ongoing changes if we understand the responses that have been preserved in the information-rich fossil record.”

In 2000, late Miocene fossils were found during road construction near Gray, Tennessee, and the Gray Fossil Site was established at the location. There, the fossil material at the site is found primarily in an organic-rich clay deposit that filled a large sinkhole. This sinkhole once served as a watering hole for local fauna, including tapirs, red pandas, alligators and turtles, she said.

Fossils from a minimum of six rhinoceroses, including two nearly complete, articulated skeletons, have been unearthed, Short said, and while Wallace knew they were different, they weren’t studied until she started her master’s thesis in 2011. Availability of such complete specimens enabled a thorough bone-by-bone description of the new species.

Excavations are still ongoing, and as more material is uncovered, the understanding of this unique fauna will improve, she said.

More information on the Gray Fossil Site is available on the Center of Excellence in Paleontology website: www.etsu.edu/cas/paleontology.

The publication on the new rhinoceros species can be found in the Bulletin of the Florida Museum of Natural History at tinyurl.com/newrhinoceros.