By NewsroomJune 29, 2021Wildlife Trade
No Comments 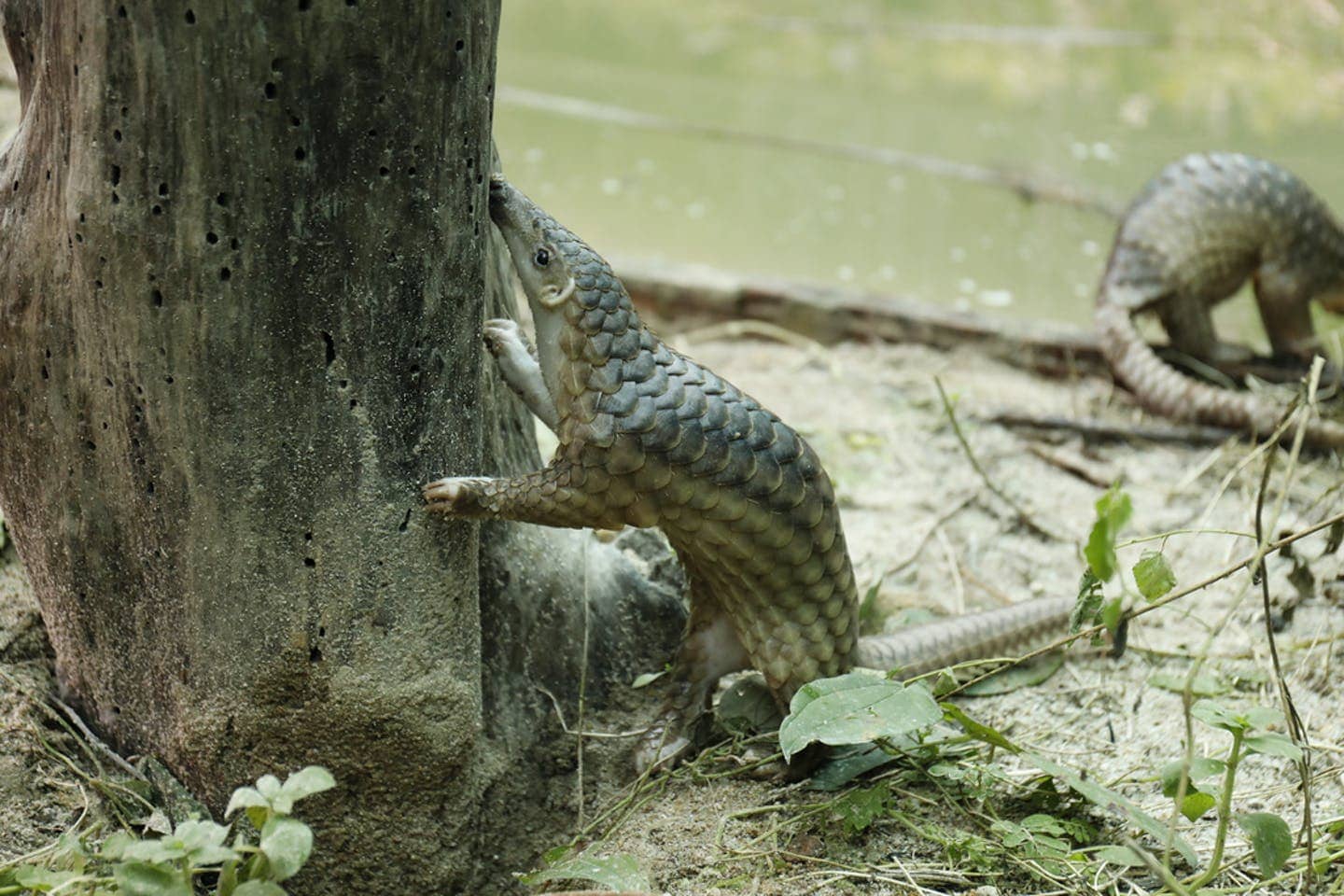 A rescued pangolin at Wildlife Quarantine Center in Thailand. Hunting for food and medicine is driving pangolins towards extinction. Image: USAID / Flickr.

Thailand has long been a favourite of global investors for its role as a regional trade and logistics hub. But if investors love Thailand, so do all shades of smugglers.

In recent years, the Kingdom’s ports, fishing and seafood industry have come under fire for human trafficking and illegal and unsustainable practices such as forced labour and IUU (illegal, unreported and unregulated) fishing.

The problems were so bad that the United States placed Thailand in the lowest tier in its annual global Trafficking in Persons report in 2015, and the European Commission threatened to slap the Kingdom with a trade ban in the same year over IUU fishing.

Having made some inroads to overhaul Thailand’s image as the gateway to Asia for illicit goods, the Thai maritime sector is now confronting another criminal activity that may pose an even more profound threat – wildlife trafficking.

With a value of between US$7 billion and US$23 billion each year, illegal wildlife trafficking is the fourth most lucrative global crime after drugs, humans and arms, according to the World Economic Forum.

According to the United States Agency for International Development (USAID), Thailand is a source, transit point, and destination point for trafficked wildlife and wildlife products. This means that cooperation with Thailand is especially important for combating wildlife trafficking globally.

“As a business, we have to be concerned with this, because everyone has a responsibility for the planet,’’ says Anat Machima, the chief operating officer for Hutchinson Ports. His firm handles about three million tonnes of cargo a year at Laem Chabang, the largest of Thailand’s eight seaports.

Measuring black industries is problematic, but the United Nations Development Programme believes that between 72 and 90 per cent of wildlife – some live animals but mostly parts such as ivory tusks and rare timber such as rosewood – is being trafficked by sea.

With consequences for human health, economies and the planet, wildlife crime is increasingly gaining the attention of governments.

Reducing the risk of future pandemics has spurred recent efforts to curb the trade of wildlife in Thailand. Some animals, carrying novel or unknown diseases, “are the equivalent of dirty bombs because of the damage they could do,’’ says Steve Galster, the founder of Freeland, an anti-trafficking organisation.

Galster and others have suggested wildlife trafficking may have been instrumental in spawning the Covid-19 pandemic. While that is still unproven, scientists have established that numerous epidemic diseases including H1N1 avian influenza, HIV and Middle East Respiratory Syndrome are zoonotic, meaning they jumped from an animal to humans.

The government intends to make Thailand “free of the legal wildlife trade” while also combatting illegal trafficking in wild animals, minister for Natural Resources and the Environment Waravut Silpa-archa said in a recorded address on 27 May.

“It is vital to tackle the sales and consumption of high-risk wildlife as its supply chain is the source of the highest risk of zoonotic diseases. We need to stop the supply chain,” the minister said. However, anti-trafficking groups maintain that there are too many vested interests influencing policy to eradicate the lucrative trade of wildlife.

Hutchinson Ports was one of 33 maritime companies, industry groups and government agencies that pledged to cooperate more closely in fighting the problem, during a workshop on wildlife trafficking in March.

“We learned a lot about the traffickers’ methods and we are trying to stop them,” Anat said. “But the gangsters are always one step ahead of us.” If the Thai maritime sector is to succeed, more advanced tools, partnerships and staying on top of new developments are essential, he said.

Thailand has been pro-active in trying to pull regional efforts together to stem the illegal smuggling of wildlife. It was the driving force behind the founding of the Association of Southeast Asian Nations Wildlife Enforcement Network (ASEAN-WEN) and chairs an ASEAN working group on the issue.

Domestically, the country has strengthened its laws against trafficking namely through the introduction of the Wildlife Conservation and Protection Act in 2019. The legislation includes a new category for non-native, CITES-listed species as “controlled”, and significantly increased the maximum penalties for infractions involving species listed in the Act. Internet trade is also considered a violation attracting high penalties.

Although more legislation is needed. While high-profile seizures at Suvarnabhumi International Airport in Bangkok are not uncommon, Chaiyut Kumkun, an advisor to the Thai Customs Department admits that sea ports are more difficult to monitor because of the volume of cargo.

There is a significant issue with container shipping and the misdeclaration of goods. Given the massive volumes of cargo, examining even a substantial fraction of it would be impossible. Nearly 10.8 million containers moved through Thailand’s ports in 2019, according to the World Bank.

Port officials usually have little capacity and resources to check containers and stepping up physical inspections would create bottlenecks that could sink businesses, hurt the country’s economy and investor appeal. The status quo, however, presents a critical challenge to human, environmental and economic security. Just 24 percent of import containers are inspected physically or by X-ray and the percentage is lower for export containers, Chaiyut said.

“What it comes down to is having better tools for risk assessment,’’ says Monica Zavagli, a programme manager for TRAFFIC. “That’s the key to balancing trade facilitation and security.”

While some parts of the supply chain are doing a good job on risk assessment, others are falling short, according to Zavagli. Everyone along the transport route needs to know what the ‘red flags’ are.

These include suspicious or clearly inaccurate paperwork, track records or histories of companies or individuals or the lack thereof, ports of origin or destination where wildlife trafficking or consumption is rife, routes and stops that don’t make sense, and ports in locations where corruption is endemic. An effective list of red flags needs to be extensive and detailed, Zavagli said. TRAFFIC intends to publish one for the industry in coming months.

For their part, many Thai shipping companies feel they are already doing what they can. “Looking for red flags and due diligence is already exercised by all shipping lines in screening bookings,” claims says Vorapipatkul, manager of the Bangkok Shipowners and Agents Association, which has 60 member companies. “It really is up to the customs department to fight this.’’

The Customs Department Enforcement Division told Eco-Business that the government is in the process of crafting an action plan to deal with container trafficking. But an effective response “requires time, resources, manpower and equipment,” Chaiyut said.

“Cooperation with the private sector and source and destination countries is essential.” He would also like to see a special task force on sea cargo set up to conduct in-depth investigations. Customs does have a comprehensive list of red flags and strong tech tools. They are reluctant to detail any of them, however, for fear of alerting the syndicates. They say their efforts are hampered, however, by a lack of trust among various actors, and the problem of jurisdiction.

When suspect or contraband cargo is held or seized, a variety of government ministries or agencies may have responsibility for what to do with it and who to potentially prosecute, depending upon the contents. Both shippers and customs complain that impounded containers can sit for years waiting for action or a case to be resolved. That type of fragmented, divided response is in need of reform.

The strongest reform Thailand and other countries could take, Galster says, would be to ban all wildlife trading and sales. Not just for rare or endangered species. A complete shut down would be the most effective step to deter the traffickers, he says.

Short of that, and other legal reforms, integrating artificial intelligence and other advanced tech tools could make inspections and spotting red flags more powerful and efficient. And regular sustained trainings for everyone along the supply chain is also important. More than artificial intelligence, law enforcement needs more human intelligence. Galster says that every time Freeland has conducted trainings for airport staff, tip-offs follow and seizures are made.

Oftentimes, those tip-offs haven’t come from incorruptible civil servants or witnesses, however. They’ve come from informants. “The rival traffickers or someone involved who didn’t get their cut of the profits,’’ Galster said. It turns out that to save more tigers, elephants and pangolins, the world is going to need more rats.