The animals of Manas National Park (State of Assam, India)

By NewsroomOctober 19, 2020Anti-poaching
No Comments 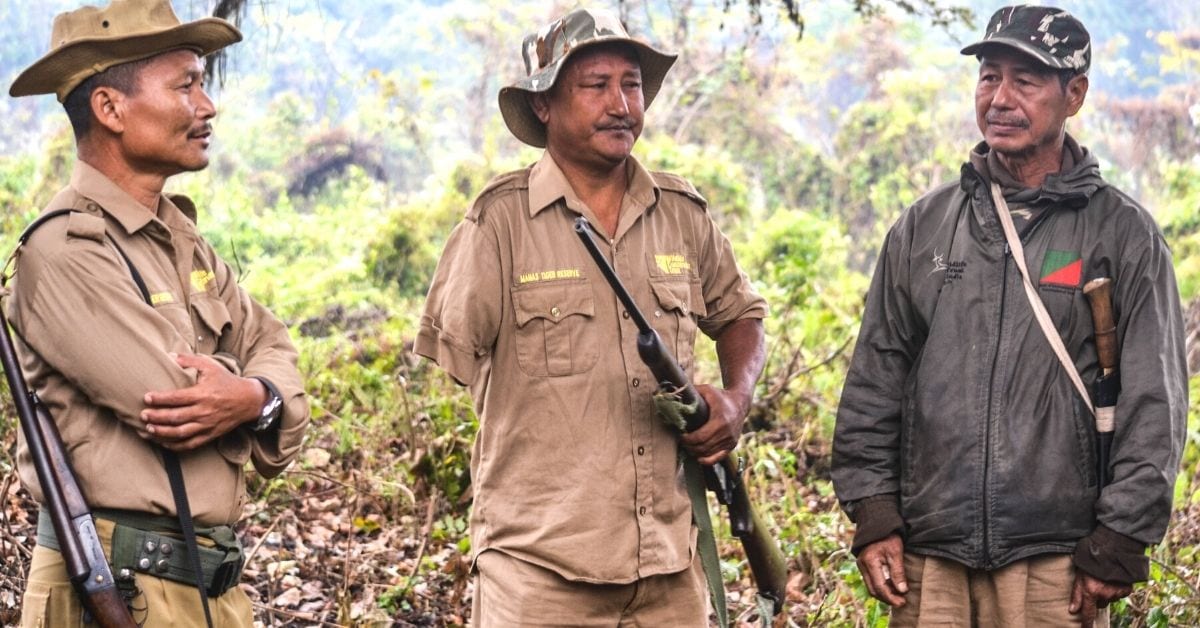 Once known for their cruelty against animals, poachers at Manas National Park in Assam are now at the helm of protecting the wildlife at the UNESCO world heritage site, restoring the Indian Rhino’s glory. Original photo as published by The Better India.

“A rhino,” pointed out my guide from the front of our jeep. All of us turned to look at the magnificent creature on our left happily munching away on grass, stopping only to drive away oxpeckers from its back.

I was deep within Manas National Park in north western Assam in January 2020. In front of me was a vast expanse of wooded hills, fertile grasslands, and tropical forests punctuated by periodic sighting of animals. Located on the foothills of Eastern Himalayas, Manas is home to many rare species of flora and fauna including the pygmy hog, Indian elephant, and greater one-horned rhinoceros.

We had finally spotted a rhino after five hours of driving around. The famous Indian one-horned rhino made an appearance from behind a thicket of tall yellow grasses. With a sea of blue mountains and wild green bushes behind it, the creature looked perfectly at home, safe and unperturbed.

However, things were not always so calm and peaceful in Manas.

Poaching was rife and killing of animals was rampant. And that was because Manas was located right at the heart of Bodoland, a culturally-diverse and politically-volatile autonomous region in India.

Bodoland had always been wrung by ethnic tensions. When the Bodoland Nationalist Movement started in 1986, the whole of north western Assam was plunged into a state of lawlessness.

Forests were left open and unguarded. Rhinos were poached and sold across the border in Bhutan. Elephants and tigers were ruthlessly slaughtered. Smaller animals were killed for meat. Trees were felled and timber was siphoned off. Manas was badly caught in the quagmire.

Rampart poaching and deforestation eventually led to a serious shift in the ecosystem balance within and outside the national park. After a while, there were no animals left to kill nor did any underground water remain. Springs dried up, trees disappeared, and Manas was left barren.

There had been as many as 100 rhinos in Manas at the beginning of 1980s. During the insurgency that lasted between 1986 and 2003, all of them were wiped out.

These years also saw the killing of six forest staff and several domesticated elephants and the reckless destruction of camps and range offices.

The wildlife sanctuary, which had been recognized as a UNESCO World Heritage Site in 1985, stood at the brink of imminent disaster.

That is when the formation of Bodoland Territorial Council (BTC) in 2003 came as a godsend.

Ethnic tensions eased as Bodo autonomy was recognized in 2003. BTC members started taking an active role in conservation. They educated poachers on how poaching was affecting their own ecosystem. Most importantly, they encouraged locals to participate in the process and instilled in them a sense of pride and belonging for their motherland.

Budheswar Bodo, an ex-poacher from the 1980s who lost an arm in a nasty wildlife encounter, recounts, “BTC members made me realise that the protection of my motherland rested on my shoulders. For the first time in many years, I felt that Manas truly belonged to me and my fellowmen. It was my forest and it was my responsibility to nurture and care for it.”

A prolonged discussion with Budheswar and two other ex-poachers made it evident that these people had given up poaching not necessarily for an assured income or a respectable lifestyle (though they were important factors) but for their own sense of belongingness. Recognition of Bodoland had finally made the poachers feel at home.

Over the second half of 2003, a 3-tier structure was put in place to restore Manas to its former glory. It included members of the BTC, ex-poachers, and local youth organizations that played a vital connect between the government and the erstwhile rustlers.

Kalen Basumatary, head of Manas Maozigendri Ecotourism Society (MMES) – one such grassroot organization, fondly reminisces of the time when they would go out with a mission every day to reform former poachers. Kalen and his friends were instrumental in shifting public opinion from poaching to protecting. They ran anti-poaching and anti-logging campaigns.

“It wasn’t an easy task”, Kalen notes. “But it was definitely a fulfilling one. Every time I brought a poacher back into the fold, it felt deeply gratifying.”

He proudly points out that none of their employees have gone back to poaching in the last decade even though it has seemed lucrative at times.

With the launch of Indian Rhino Vision 2020 in 2005, rhinos began to be reintroduced into Manas.

Ex-poachers were made an integral part of the entire effort. They knew the forests of Manas like the back of their hands. They knew all about animal habitats, feeding times, cries, and calls. They could track and bring back animals if they went astray. Needless to say, they made the best protectors.

Slowly but surely, the rhino number at Manas increased. It is now back at 40.

Tigers and Asian elephants can be seen again. Even migratory birds who had sensed danger earlier have started flocking back to the sanctuary. Tourism is much better now giving locals the hope of an eco-friendly and sustainable future.

Manas is now home to countless birds and animals as well as hundreds of poachers who, for a while, had forgotten the touch of their motherland.

As I wrapped my head around this human face of wildlife conservation, I stumbled upon a water hole that was bubbling with the clean underground water. Birds swooshed by over my head and a peacock called from a distance. I could almost hear elephants trumpeting back home while a baby rhino played in the mud. Manas was fecund and green again with life and hope.