Guest blog by Keith Somerville, Save the Rhino | October 3, 2019

Bashing along a basalt boulder-strewn track in Torra Conservancy in Namibia’s Damaraland, our guide cut the engine and whispered “rhino”. About 150 yards ahead was a large black rhino looking straight toward us. Because rhinos have poor eyesight it is most likely that she was listening to the sound of us approaching, but probably couldn’t see us well enough to know what we were. 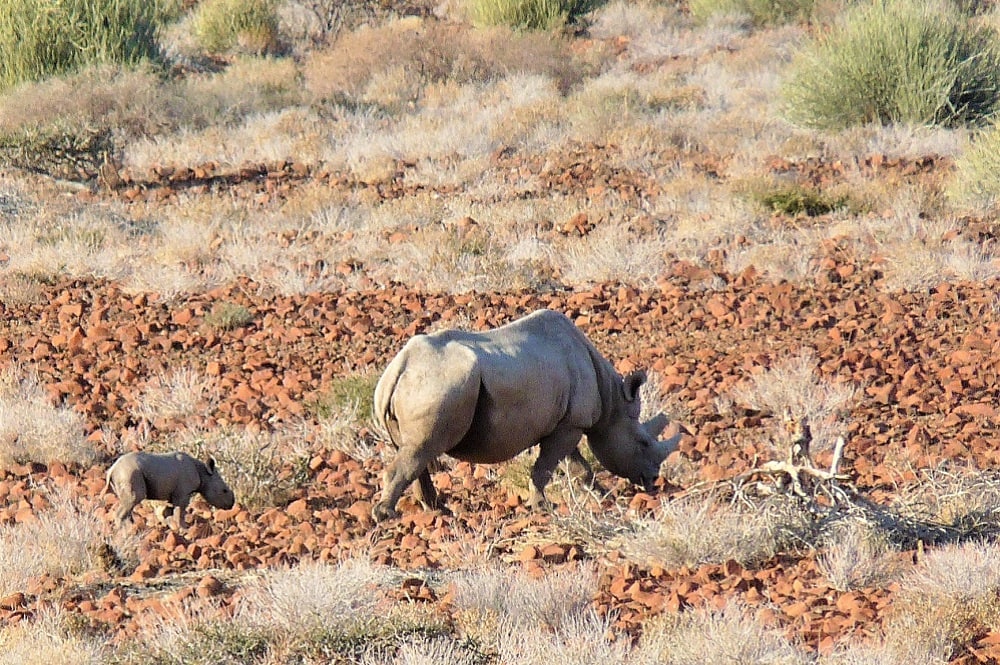 Original photo as published by Save the Rhino: Guest blog by Keith Somerville.

If the cow was aware of our presence, she didn’t show any concern and continued nibbling at the euphorbia damarana bush in front of her. This bush survives well in the harsh, arid, rocky terrain and climate of Namibia’s Damaraland. It may be one reason why the desert-adapted rhinos of Damaraland appear to be surviving the three-year drought there better than other wildlife. Euphorbia is strongly drought resistant and exudes a thick, milky sap that is so toxic that it can kill browsing herbivores and has been used by San hunters as a poison for their arrows. Rhinos can eat it without ill-effects (as can desert-adapted gemsbok and kudu) and it helps them survive when other vegetation withers and dies.

Talking to trackers from Namibia’s Save the Rhino Trust, I was told that elephants and many other browsers won’t eat euphorbia and this means more food is available for the rhinos when drought has destroyed palatable plants and led to death for some animals. We saw the carcass of an elephant in one of the conservancies, which our guide said had died from starvation caused by drought.

Yet the rhinos are doing well. The rhino we first spotted was not alone. She was accompanied by a very healthy three-month-old calf. The calf looked strong and showed no signs of suffering from the conditions – an indication that the cow was getting enough food and liquid to produce milk.

A kilometre further on, we got more evidence of the successful breeding ability and mothering skills of the cow we’d seen. Again feeding on euphorbia was a young male. This, our guide told us, was the three-year-old offspring of the same cow, which had been weaned and then pushed out of her territory by the mother before she gave birth to the calf we had seen.

A few days later we successfully tracked a black rhino cow and fully-grown calf in a conservancy to the north of Torra. Our tracker told us that calves were appearing to stay with their mothers longer during the drought, presumably to learn more about what they could and could not safely eat.

It was heartening to see successful breeding among these endangered rhinos and to be able to approach to a close but respectful distance without causing alarm. This is to a great extent a result of the conservancy policy in Namibia, giving local communities a greater sense of ownership over land and wildlife, and the work of the Save the Rhino Trust in combating poaching and encouraging tolerance in the conservancies (where pastoralists live alongside wildlife).

Poaching remains a problem in Namibia – but less so in conservancies where there are eco-tourism ventures and the people have the ability to make their own decisions about sustainable approaches to conservation. This means that communities benefit from encouraging the well-being of rhinos, as they bring in income through tourism without threatening livestock or water resources.

Professor Keith Somerville is a member of the Durrell Institute of Conservation at the University of Kent, a Fellow of the Zoological Society of London and a Senior Research Fellow at the Institute of Commonwealth Studies.