The distribution of all life on Earth. A few surprises, perhaps?

By Peter BorchertSeptember 2, 2020Editorial
No Comments 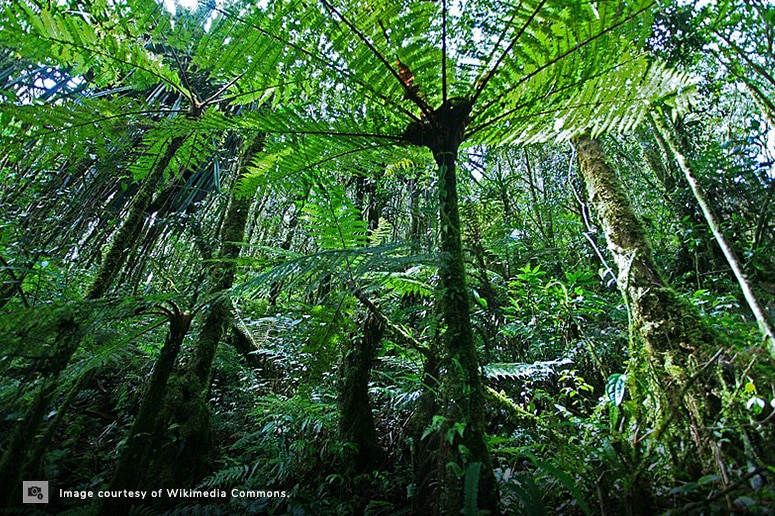 I once took part in a trivia quiz, and one of the questions was, “If all the people in the world were to stand shoulder-to-shoulder, we would fill ___?” The choice of answers was São Paulo, Tokyo, Florida, or Los Angeles. After some discussion and very little consensus, the team I was on went with my choice, Florida. I felt it just had to be the biggest space on offer. But, much to the annoyance of my dissenting teammates, I was wrong. “Los Angeles,” called the quizmaster, “all 502 square miles of it.”

I still find it hard to believe that our 7.8 billion population could fit into an area that is but the tiniest fraction of one percent of the Earth’s land surface. But recently, I came across a paper that has a go at how much life there is on the planet, and this really started to put things into some perspective for me.

The authors effectively carried out a census of the biomass on Earth (biomass being the total weight of organisms in a given area or volume). They calculated, after much deliberation, I am sure, that the overall biomass composition of the biosphere is approximately equal to 550 gigatons of carbon—that’s 550 x 109. Then came a few statistics that, in no uncertain terms, puts us in our place. Have a look at the chart below, and you will see what I mean. 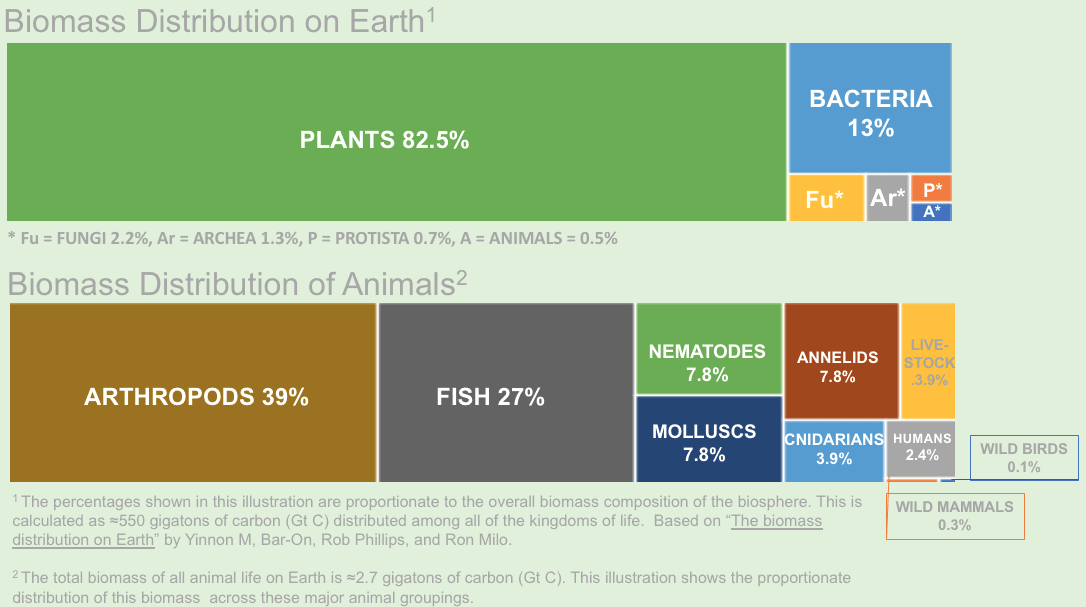 Plants are overwhelmingly the greatest proportion of the total. Some 82.5 percent of everything that lives is a plant. Then come the bacteria at about 13 percent, followed by fungi (2.2 percent) and the predominantly single-celled archaea and protista, which together make up another two percent. Finally, at no more than half a percent of all the world’s biomass come all the things that wriggle, crawl, creep, walk and fly—the wonderfully diverse kingdom of animals, including the 7.8 billion of us that could squeeze into the City of Angels.

Even in the assembly of animals, humans don’t weigh in at very much. A full two-thirds of the total are the arthropods (the insects, spiders, millipedes, centipedes, and crustaceans) and all the fish in the oceans. Next come all the microscopic roundworms, the segmented worms, snails, corals, jellyfish, and all their kind, which make up another 27 percent or so. And at last, we arrive at the rest of the planet’s inhabitants. These are the ones we probably know the best—humans, our farm animals, the wild mammals, and the wild birds. In total, this meager grouping accounts for less than seven percent of all animal biomass on the planet. Estimates for the total biomass of all reptiles and amphibians are too negligible even to be included.

What is apparent is that 2.4 percent of no more than 0.5 percent of all life on Earth—us humans—has left only about five percent of its terrestrial surface virtually untouched. We have had some ecosystem-altering impact on almost the entire planet. But by the same token, the overall conclusion is that approximately half of the land area has “low human influence” and that a quarter displays “very low influence”. These tend to be the very cold places such as montane grasslands, the tundra and boreal or snow forests, and the very arid desert landscapes. Places, in other words, that owe their relatively untouched condition to the fact that we find them uncomfortable to live in.

This is encouraging to a degree. For if indeed only 50 percent of the planet’s land area has been somewhat influenced by human activity, then the target of conserving half by 2050 seems achievable—if, of course, there is the political and fiscal will to do so. Even then, the physical task of removing our footprint and restoring the land to anywhere near-pristine condition will take some doing.

But let’s be clear, we have to do it if we are to halt climate change’s worst effects. There is no other option. If we don’t preserve a good portion of all habitats—let’s not forget that more than 80 percent of all life on Earth is represented by carbon sequestering plants—we don’t stand a chance.

We have to do the same for the marine environment, where nearly 90% of the world’s marine fish stocks are now fully exploited, overexploited, or depleted. The integrity of entire marine ecosystems—the coral reefs, for example—are in danger. Pollution, 80 percent of which comes from human activity on land, is choking sea life. The very chemistry of the oceans is changing, and sea levels are rising.

With our big brains and our opposable thumbs, we humans have created things of great beauty, and along the way, we have acquired a huge knowledge of the vast and the minute workings of the cosmos. But we have also done great harm to our home, Earth. Now it is time to repair that damage and to learn to live within our ecological means.