The Glasgow Climate Pact—we have kept 1.5 degrees within reach—but its pulse is weak.

By Peter BorchertNovember 17, 2021Editorial
No Comments 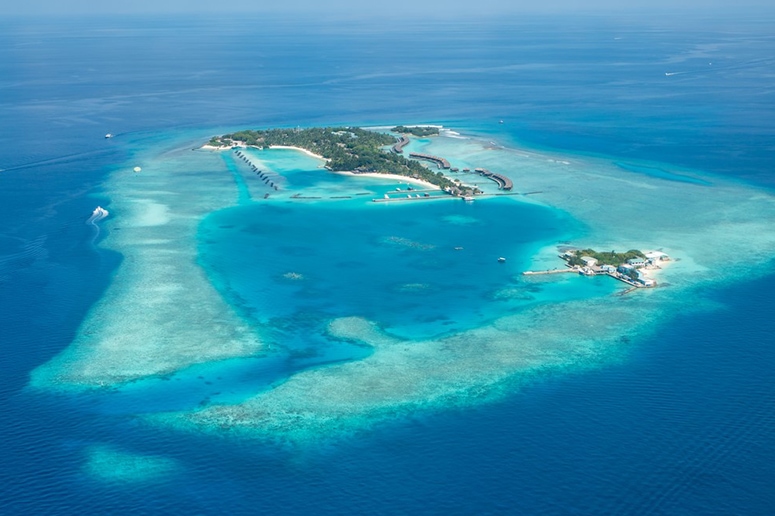 COP26’s inability to deal conclusively with continuing fossil-fuel usage does not augur well for the survival of island states such as The Maldives which are directly threatened by sea-level rise due to global warming. © Blue Planet Studio/Shutterstock.

For the past few weeks, I have been recovering from major back surgery. It hasn’t been a particularly pleasant experience. Still, I like to regard it as an investment in the future, a time of greater mobility and a return to exploring first-hand this wonderful world we live in.

During this recuperation, I’ve had a recurring reverie as I’ve drifted through many periods of half-sleep. In this state, I find myself with other, unidentified folk in a canoe paddling serenely along the banks of the Zambezi River some way above the Falls. The scene is idyllic. Elephants come down to drink and play in the water, monkeys, and baboons shriek their objections to anyone and everyone from the safety of the riverine canopy, crocs and hippos bask on sandy spits, and a passing parade of other critters nervously come and go to slake their thirst.

But then comes the awful realization that we are not leaving these cameos in our wake. No, they are receding ahead of us as, despite our paddling, we are actually losing way against the current. We are being drawn inexorably towards the thunder and mayhem of the Falls themselves. There is nothing we can do other than paddle harder. It does little, of course, other than slow the inevitable calamity. But the act of slowing the process gives hope that, even as we slip into the cauldron of seething water, enough energy and resolve will arrive to push us back into safety.

Given recent events, however, understanding the cause of my rather disquieting daydream doesn’t require much by way of insight. One of the positives, or perhaps curses, of my semi-bed-ridden state, has been the time I’ve had to follow in some detail the goings-on at the COP26 climate event in Glasgow.

I wasn’t particularly sanguine to start with about the outcomes from the two-week-long deliberations of the 197 participating nations in this latest round of climate talks where the overarching challenge has been to limit the warming of our planet to 1.5 °C (34.7 °F) above pre-industrial age levels. This ambition, in turn, means that greenhouse gas emissions need to be reduced rapidly in the decade ahead and brought to zero around the mid-century mark.

It sounds as if it shouldn’t be so difficult to do, and it wouldn’t have been if, internationally, we had agreed on how to reach a carbon zero future when, decades ago, scientists began to warn of the impending disaster. Instead, governments and industries have bucked and squirmed against any real behavioral change. Now, to preserve a world in which we can continue to live with some comfort, we’re faced with having to do more and more in less and less time to avoid utter disaster. And still, we’re not exactly rising to the challenge in any compellingly convincing manner. The future is sobering, particularly for the world’s desperately poor communities already faced with privation and island nations set to be inundated as global sea levels continue to rise unavoidably.

Our painfully slow progress towards climate targets should come as no surprise. After all, forward movement regarding any items on the wide-ranging agenda is only reached through the exacting process of attaining consensus. The representatives of 197 nations, each with their set of instructions to guide deliberations at the negotiating table, is at best a recipe for almost imperceptible forward movement. Being at the negotiating table must be like floundering in deep mud. And it must be exhausting for those involved. So, at the very least, I feel bound to salute their perseverance and individual and collective efforts to secure a more comfortable world.

Was the conference a success? I’m inclined to say no. I understand Greta Thunberg’s dismissive comment that all that happened was the “watering down, the blah blah blah.” But I also have a sense that for perhaps the first time ever, the consequences of human-induced global warming struck deeper and more uncomfortably into the flesh of nations than at any prior meetings. Nevertheless, the emotional closing statement by Alok Sharma, the conference chair, was palpably felt, not only in the plenary gathering but around the world among those of us who had allowed ourselves to hope for better.

“It is decision time,” he said, “and the choices you are set to make are vitally important. They launch a decade of increasing ambition across mitigation, adaptation, finance, and loss and damage, marking the road to keeping 1.5 degrees within reach.”

In getting to this point, an agreement to phase out coal had been hailed as a line in the sand in keeping alive the goal of limiting global warming to the 1.5 degrees target. But it wasn’t to be for at the last moment of voting on the plan came last-minute concessions as the conference bowed to India’s demand, supported by China, that the Glasgow Climate Pact’s commitment on coal power was to be watered down from a definite “phase out” to “phase down.”

The emotional effect on Sharma was evident, and I confess to a lump of sadness in my throat as his voice dropped in both strength and volume. “I apologize for the way the process has unfolded,” he said shakily, “and I am sorry. I also understand the deep disappointment, but I also think, as you have noted, that it is vital that we protect this package.” The auditorium was silent for some while before a ripple of applause went round in support.

Later, with regained confidence and composure, Sharma said: “I think, today, we can say with credibility that we have kept 1.5 degrees within reach. But, its pulse is weak. And it will only survive if we keep our promises and translate commitment into rapid action.”

It seems like a very small change in terminology, but the ramifications could prove massive. “Phase down” definitely weakens the commitment to ceasing coal-powered energy production while at the same time sanctioning the go-ahead for pro-coal countries, not only India and China but the likes of Indonesia, Australia, South Africa as well. Russia too has to be watched as although coal power has declined in that maverick state since the 1990s, the country still has some of the most extensive coal reserves in the world.

Some 184.5 gigawatts of coal-fired power are currently under construction, with 77.5 percent of it happening in India, China, and Indonesia. This represents an 8.9 percent expansion of global coal power from plants designed to operate for at least four decades.

South Africa also expressed its delight at the final phrasing of the Glasgow Pact, understandably so given the country’s 80 percent reliance on coal power and its eagerness to develop even more. And this notwithstanding the botched Medupi and Kusile coal plants, which should have been completed by 2015 at a projected total cost of $10.68 billion. As things now stand, with significant contributions from corruption and incompetence, the plants have only worsened the country’s faltering electricity infrastructure. And they might never be fully operational, despite the soaring costs of construction to more than $29 billion.

Furthermore, the country is considering the development of a 1,320-megawatt coal facility in the north of the country while there is further provision for another 1,500 megawatts of coal power.

However, all is not lost as South Africa, already among the world’s top 12 most prominent greenhouse gas emitters, has secured some $8.5 billion in loans and grants to finance its migration away from coal. One can only hope that this finance finds its way to its intended purpose and not into the pockets of those so ready and adept at stripping state coffers.

Easing away from fossil-fuel development should not be that difficult for Africa at large, given its abundance of sunshine, the length of its windswept coastline, and the geothermal energy following the course of the Great African Rift from the Red Sea to southern Tanzania and northern Malawi. The rise of Kenya’s geothermal industry ranks ninth globally. Also, The Infrastructure Consortium for Africa and the United Nations Environment Program estimates a potential of 20,000 megawatts of geothermal energy across eastern Africa. And when it comes to solar energy, Morocco is showing the way as it rapidly becomes a world leader in renewable energy production. The country’s Noor Complex is the largest concentrated solar farm in the world and has the capability to power one million homes and greatly reduce the nation’s use of fossil fuel.

Most astounding of all, however, is the potential of wind to power the continent’s growth. Earlier this year, the International Finance Corporation financed a study to assess the potential for wind power found in Africa. The result: Africa “possesses an astonishing technical wind potential of almost 180,000 terawatt-hours a year—enough to satisfy the entire continent’s electricity demands 250 times over.”

But, back to COP26. Was it a success or failure? Alok Sharma, seemingly desperate to salvage something positive from the two weeks of negotiation, referred to it as a “fragile win for the climate,” whereas John Vidal for The Guardian wrote baldly that “it could have been worse, but our leaders failed us at Cop26. That’s the truth of it.”

Suppose the negotiation process can become more nimble and the United Nations Framework Convention on Climate Change can find the power to force the more recalcitrant members to comply in the interests of the greater global community. In that case, there is hope, even at the eleventh hour. But I fear that when next I allow myself to give way to that drowsy state of reverie, I’ll find myself and others still paddling like crazy as we slip towards the edge.

However, we dare not give up.