The good, the bad and the ugly of the Indian Rhino Vision 2020

By NewsroomMarch 10, 2020Anti-poaching, Translocation
No Comments

On February 29, 2020, two more rhinos were moved out of the Kaziranga National Park to the Manas National Park –a distance of 280km–as part of the translocation programme under the Indian Rhino Vision (IRV) 2020.

Both the rhinos–mother “Faguni” and her sub adult offspring “Asha” covered the distance overnight and were released in the Bansbari Range of Manas National Park in the wee hours of March 1. With their release, altogether 20 rhinos have now been shifted to Manas under the IRV programme scheduled to end by the middle of this year. Eighteen rhinos have already been translocated to Manas since 2008.

An ideal habitat for the breeding of the Great Indian One-Horned Rhino (Rhinoceros unicornis), Kaziranga has seen a rise in the number of the species. The animal shrugged off its ‘endangered’ tag once its population crossed the 2000 mark.

This fuelled an overweening strategy–the Indian Rhino Vision 2020 designed by the Rhino Task Force– that targeted 3,000 rhinos by the year 2020 in the rhino-bearing sanctuaries of Assam.

Manas National Park, another World Heritage Site and Laokhowa and Burhachapori Wildlife Sanctuaries remained preferred destinations for the translocation of rhinos under the IRV 2020 initiative. However, translocation to these wildlife areas remained a daunting task as these sites continue to be vulnerable to poaching activities. 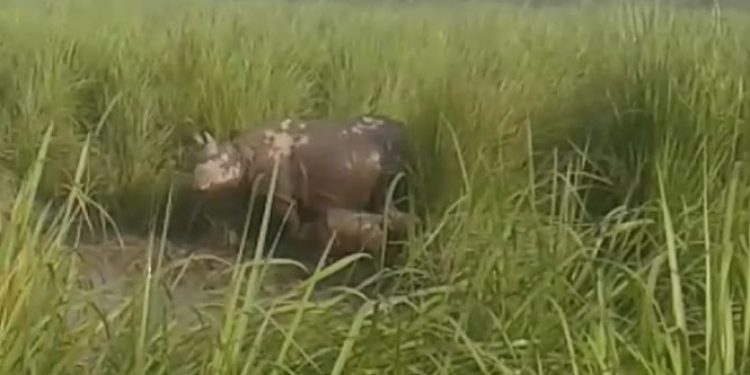 Started on April 12, 2008, IRV’s translocation process came under the scanner after more than half of the trans-located rhinos to Manas fell prey to the bullets of poachers. Without adequate patrolling staff, it was a colossal task for a few people to constantly guard the animals against human rapacity.

The death of the rhinos in Manas had been a huge setback for the IRV 2020 programme.

Instead of dealing with the long-term conservation challenges and preservation of this unique site, the Indian Rhino Vision only went on pulling out rhinos from Kaziranga and Pobitora for translocation solely keeping in view the magic figure of 3,000 rhinos by 2020.

They even went on for a temporary band-aid effort of “trimming” horns on rhinos to be trans-located to Burhachapori and also on stray rhinos. The decision, taken at the IRV 2020 partners meeting on January 30, 2014 at the Assam State Zoo was met with strong opposition from conservationists and the State forest department was compelled to abandon the idea.

However, IRV continued with the translocation process and sent another mature female and her offspring to Burhachapori. An ex forest official of the Assam forest department, on conditions of anonymity, said, “Rhinos endure a certain amount of stress during the translocation process. It was a terrible sight– when after regaining consciousness– the mother rhino wounded itself with multiple injuries each time it stumbled on the thorny barrier in the effort to free itself from captivity. Further, the mother suffered a grave cut in the ear during notching, that turned septic and the animal died a slow and painful death. The orphaned calf suffered a great deal during the floods. The calf suffered serious stomach ailments that finally brought the end to the poor animal.”

With the death of the translocated rhinos in Burhachapori the whole IRV process became very controversial. There were allegations that the IRV stakeholders simply washed off their hands once translocation process was over; they were never bothered about the safety of the trans-located animals. This was indeed a grave allegation. The death of rhinos not only contradicts the conservation efforts but undoubtedly overshadowed the whole IRV process.

After the debacle at Burhachapori, many conservation NGOs of the state were seen protesting against the translocation programme of IRV. They held responsible the IRV stakeholders– Department of Environment and Forests, Assam; WWF-India; International Rhino Foundation (IRF); Bodoland Territorial Counci; US Fish and Wildlife Service and other organizations associated with the Project — for the death of at least 13 rhinos–those trans-located from Kaziranga and Pobitora.

Kaziranga Wildlife Society, Early Birds, Aranya Suraksha Samity, Green Guard, The Green Society and Centre for Conservation, Education and Research demanded the forest department to stop the translocation process at once. The NGOs alleged that translocation was carried out without prior and proper security arrangement of the targeted area. There were also severe allegations of negligence towards security and health monitoring of the animals. The NGOs also demanded the government to institute an inquiry into the death of all trans-located rhinos and make public the post mortem report of the female rhino died in the ‘Boma’ in Burhachapori.

Several student organizations including the Asom Jatiyatabadi Yuva Chatra Parishad (AJYCP) also came out to voice their concern against killing of rhinos in the name of “translocation” under Indian Rhino Vision 2020.

Once home to more than 80 rhinos, the entire rhino population in Manas National Park was wiped out during the ethnic unrest between 1988 and 2001.

The Government of Assam in collaboration with Wildlife Trust of India (WTI) and International Fund for Animal Welfare (IFAW) started the process of re-introduction of rhinos in Manas. Rhino calves orphaned by flood in Kaziranga National Park and hand-reared in the CWRC –the rescue and rehabilitation centre stationed at Kaziranga—were sent to Manas National Park between the years 2006 and 2014.

From these calves and with those captured from the wild as part of IRV translocation between 2008 and 2012–rhino population in Manas National Park increased to 42 and the population now seemed to be well established.

Along with the growth of a viable Rhino population, Manas regained her (UNESCO) World Heritage Site.

However, there have been more negatives than positives in the whole IRV story.

A section of forest staff in the Manas and also rhino experts allege that more than 10 translocated rhinos had been killed since 2011 to 2016, but authorities failed to nab a single culprit. On the other hand, a female rhino remained untraceable for the last two years.

“The same sets of people do the security assessments before every rhino translocation to the Park,” they further alleged.

Protection measures continue to remain inadequate– so much so that–Park authorities and other organizations lost more than 20 camera traps from the Panbari and first addition areas of the Park since 2018.

Poaching simply has not stopped. Sources said a group of poachers had fired at a male rhino recently in Manas National Park. The injured rhino strayed out from the core area and it was detected near a village. Photos show bullet marks on the right shoulder and it was bleeding.

“More than five hand-reared rhinos died in Manas due to infighting as these rhinos were incapable to escape a wild bull. Mixing of hand-reared animals with those captured from the wild simply proved disastrous,” said a forest official.

The primordial wilderness of Manas has been plagued by other challenges like– shrinking of habitat, encroachment of the corridors around the Park, siltation of water bodies, rise in invasive weeds that have the capacity to kill native flora such as grasses and others that are important fodder plants for the rhino along with development activities.

Un-checked growth in tourism activities, road construction along the Indo-Bhutan border and a complete lack of protection of the watershed of Manas have raised more concerns over the future of this World Heritage site. Prime rhino habitat stretches continue to be under encroachment.

Large swathes of the species’ habitat have been lost over the years. More than 200 acres in the Bhuyanpara Range have been encroached (since 2012-2017) but there had been no action to evict the encroachers. Similarly, addition areas of some 350 sq km face the same fate. From the western bank of the river Beki to the critical Panbari range, the Park remains vulnerable without any protection. Important ranges like the Bansbari and Bhuynapara have no designated Range Officer for last couple of years.

With the growth of wildlife population as well as the ever swelling human habitations in and around the Park, it has become a daunting task to meet these challenges without proper advisory and practice.

“Rather than Manas, the State Forest Department must search areas to broaden rhino range around Pobitora and Amchang Wildlife Sanctuaries. The Brahmaputra river channel from Kaziranga to Orang should also be declared as rhino zone.”

“What is lacking in rhino conservation in India is that we have no new research available on the species. We are dependent on other international organizations for all the data and information. The Government must encourage more research and declare a package without the support of any foreign agencies,” he added.