The illegal wildlife trade will continue until demand disappears

By NewsroomOctober 28, 2019Anti-poaching
No Comments

The international illegal wildlife trade includes endangered animal species and their body parts, illegal logging, and illegal fishing. It is said to be worth at least $US23 billion a year. This would probably be a low figure, because the trade in rhino horn alone has been estimated at $US20 billion a year.

To get an African perspective, I spent the past four weeks in the southern African countries of South Africa, Namibia, Botswana and Zimbabwe, camping mainly in game parks. 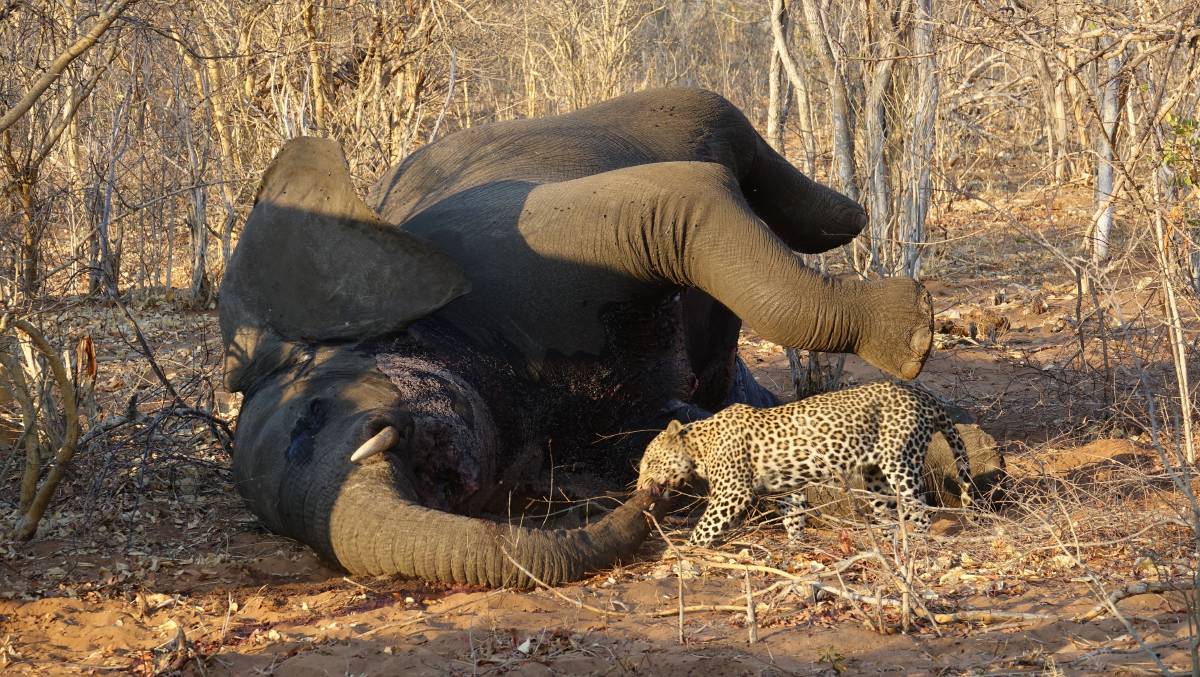 Original photo as published by Canberra Times: An elephant death due to climate change at Chobe National Park in Zimbabwe. (Picture: Clive Williams)

Many of the southern African game parks have not had rain for two years, and are keeping their animals alive by installing solar pumps to pump artesian water into artificial water holes. This does not help with sustaining the vegetation that the herbivores rely on for food. This effectively means that while they won’t die of thirst, they can starve.

In the past, animals in Africa migrated in accordance with climatic conditions. Now they are fenced into national game parks and can no longer follow traditional migration routes. Since the predators (and tourists) gather mainly at the waterholes, much of the environmentally caused animal death remains out of sight, unless it is a very large slow-to-degrade animal, like an elephant.

In South Africa the economy is slowly recovering from the decade of rampant political corruption under President Jacob Zuma, but it still has a very high crime rate, with 60 murders a day – so you always need to be conscious of your personal security. Its parks seem well managed, although criminal poaching in Kruger National Park is a continuing problem. In 2018, 769 rhinos were poached in South Africa, 421 of them from Kruger. Poachers only take the horn, which is worth three times its weight in gold. South Africa’s park rangers are armed and allowed to shoot poachers.

Namibia is the least densely populated country in Africa and is mostly semi-desert, but it is surprisingly rich in wildlife. I visited a seal colony at Cape Cross where only one in four of the pups reaches maturity, mainly due to predators. I saw one pup that was being slowly killed by fishing line tightening around it as it grew larger. Etosha National Park is the country’s main wildlife sanctuary and it seems to be well run. In 2018 in Namibia, 57 rhinos were poached and 26 elephants – although nearly all of them were poached outside Namibia’s national parks.

Botswana suffers from poachers based in Angola and Zimbabwe. Elephant poaching is high and on the rise. Botswana has Africa’s largest population of elephants, with more than 100,000. A spike in elephant poaching has occurred since President Masisi’s government disarmed park rangers in 2018. Unarmed rangers are now expected to confront well-armed poachers equipped with military-grade weapons. Cynics see this as a backdoor way of controlling the elephant population. However, at least 11 rhinos have also been poached in the past 12 months.

Zimbabwe has 85,000 elephants but says it can only support 55,000. The country is slowly recovering from its 37-year ruination by Robert Mugabe and his cronies – although corruption is still a problem. Zimbabwe’s main environmental problems are deforestation and erosion due to illegal wood collection and illegal logging. The wood collection is by people living on the edges of game parks and the illegal logging is being carried out by Chinese interests. Because of rural poverty, there is a lot of wire-snaring of game for bush meat, but snaring is indiscriminate and has decimated the endangered painted dog population. Zimbabwe does not have the resources to protect its 700 rhinos and has a dehorning program to make rhinos less attractive poaching targets. Another target for Chinese and Vietnamese traditional remedies is Zimbabwe’s critically endangered pangolin population.

Despite some high-profile seizures of ivory shipments, it seems that little has been done internationally to curb the illegal trade in animal body parts, or endangered tree species – like rosewood. Most of the demand for these items comes from a growing affluent middle class in China and Vietnam.

Namibia, Botswana and Zimbabwe have 61 percent of Africa’s elephants and want an end to the ban on trading in ivory. They say there are more than enough elephants to allow the trade to be regulated using culled elephants, natural deaths, and ivory seizures. Zimbabwe’s President Mnangagwa claims that Zimbabwe has a stockpile of seized ivory worth US$300 million, the sale of which could be used for “conservation” purposes. Botswana is considering lifting a ban on tourists hunting elephants and using culled elephants as a source of meat.

Meanwhile, the southern Africa rhino population is steadily being depleted, along with endangered tree species, because not enough is being done to protect them – or confront the end-users.

Clive Williams is a visiting professor at the ANU’s centre of military and security law and an adjunct professor at ADFA.