The Javan rhinoceros communicates through secretions on its foot

By NewsroomDecember 10, 2021Science and technology
No Comments 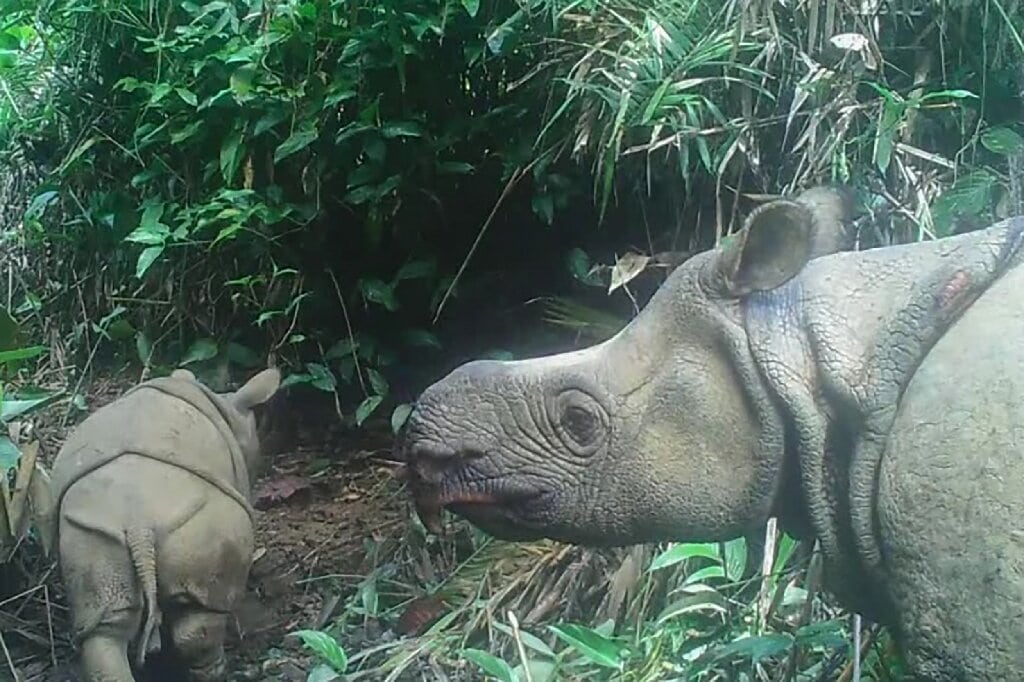 We must safeguard the web of life and care about the other living species that we share this planet with. Pygmy tarsiers eat and host bugs that we’ve seen at home — insects, spiders, lizards, bedbugs, lice, fleas, roundworms, and tapeworms. The vaquitas are preyed upon by large sharks and killer whales, keeping them away from us. But only 10 vaquitas are left and in their absence, the diet of sharks and whales may change. A tiger in the wild indicates that the forest it inhabits is healthy and diverse. As of now, there are 3,900 tigers in the wild globally, and more than twice as many (8,000) in captivity. By protecting the web of life, we build a kinder world for everyone.

The Javan Rhino, only found in Ujung Kulon National Park, Java, Indonesia, is critically endangered. It’s not just because only 75 of them are alive, but also because the park where they are located is too small for a growing future population.

They are the most threatened of all five rhino species. Their small population may lead to inbreeding, which will cause poor genetic variability. Forthcoming rhinos will be more vulnerable to disease.

Javan Rhinos, the second smallest rhino globally, have the smallest horn of all rhinos, at 10 inches. If its horn is broken, a new one will grow. Only the male Javan rhino has a horn.

The Javan rhino never reproduces in captivity. However, 25 individuals were placed at Ujung Kulon National Park in 1967. Today, they number 75, but the Park is too small for more Javan rhinos, so a new area is being studied to accommodate this growing population. Also, Ujung Kulon is near a volcano that has instigated tsunami waves in the past.

In Cat Tien National Park, Vietnam, the last Javan rhino was killed by poachers, for its horn, making them extinct in the country in 2011. There is an excessive demand for their horns as an ingredient in traditional Chinese medicine for pain and fever, despite studies showing that no medicinal value is in the horn.

A Day in its Life

A Javan rhino spends more than half of the day in mud holes for their body temperature, to prevent sunburn, eliminate skin parasites, and avoid insects. If the mudhole is too small, the Javan rhino will deepen it with its horn and feet, turning puddles into pools. It is believed that Javan rhinos depend on the forest for protection from solar radiation.

After the Javan rhino is done relaxing, it will look for food. It will scrape the sides of its mud hole with its horn for plants. Then it will leave the hole and seek thick vegetation on the ground.

In the absence of a horn, this rhino still has its pointed upper lip to grab food. Its diet is a rich variety of leaves, shoots, twigs, and fruits. In one day it will eat as much food as a healthy person will eat in one year.

Still Much to Learn

Scientists say there is much to learn about the Javan rhino’s biology. They are observing the rhino and studying its dung. Javan rhinos don’t communicate vocally, although they’re capable of making sounds.

Instead, they communicate through, first, a spray of urine, second, a secretion from its foot glands, third, twisted saplings, and fourth, scrapes on the ground made with secretions released from its foot.

An example of a Javan rhino sound can be heard here. They have more aggressive sounds when two males fight over a female, or when a male and female fight before mating.

Scientists use camera traps to better understand this rhinoceros. Some things they have learned:

Threats to the Javan rhino

At the start of the 20th century, 500,000 Rhinoceroses ran through much of Southeast Asia including Calcutta, India, Borneo, Bangladesh, Cambodia, China, Laos, Malaysia, Myanmar, Thailand, Vietnam, the Sumatra, and Java. They lived in tropical rainforests, floodplains, and grasslands.

Now, there are only 29,000 rhinoceroses left in the world. Out of that number, 75 are Javan rhinos with only one habitat, Ujung Kulon National Park. Despite this, there are still some dangers, such as:

What is Being Done

Many conservationist groups are working to save ecosystems, plants, and other animals by saving the Javan rhino first. Some groups doing this are:

Ecological Importance of the Javan Rhino

The Javan rhino does a lot of good for an ecosystem. For example: