“These dogs are not pets. They are working dogs”. Manie le Roux makes that very clear from the outset.

He is the coordinator of the K9 Unit of the Ministry of Environment and Tourism. Manie has worked for the ministry for 30 years, mostly managing parks in various parts of the country.

Over the past three years, the development of the ministry’s anti-poaching canine unit has taken a significant amount of time away from his many duties as chief control warden, Central Parks.

The dog unit is just one component of the ministry’s broad strategy to counter wildlife crime. The dogs have been deployed in a variety of scenarios as part of their training. In the near future they will be established at their permanent station in Etosha National Park. 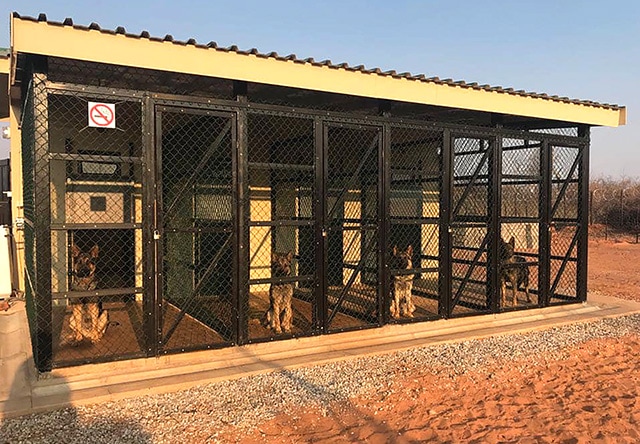 Original photo as published by The Namibian: The dog kennels at the Waterberg Law Enforcement Training Centre provide professional facilities for the canine unit.

With their keen senses and incredible dedication, dogs can be trained for a great variety of law-enforcement tasks. It’s ‘the K9 factor’ that can reduce the criminal edge. The four dogs of the unit (three German shepherds and one Malinois-German-shepherd cross) are trained for two main functions: detection and tracking.

Detection duties are aimed at finding firearms, ammunition and wildlife products – with a focus on pangolins, ivory and rhino horn. Tracking missions consist of ‘hot tracking’ – the dogs are deployed on a fresh track within the first few hours after it’s been made.

The dogs already caught their first poacher during their initial training. They have proven extremely effective when deployed at police roadblocks, detecting firearms hidden under car seats, in glove compartments and bags. During their duties at various roadblocks, Hosea Kutako International Airport and the port of Walvis Bay over the past year, the dogs have registered over 50 successes.

A success is counted each time a dog detects one of the targets it is trained to find. Most detections were licensed firearms, although some illegal guns were seized (and the people carrying them arrested) during the operation.

The inception of the unit was announced at a launch in September 2018 by environment minister Pohamba Shifeta. Creating such an elite unit is a complex task. It takes time, money, human resources and professional expertise. Invictus K9 was contracted to provide on-site training and the development of the unit. Invictus has developed numerous anti-poaching dog units in southern and eastern Africa.

Each dog is paired with its own handler – ideally for the working life of that dog, which is up to 10 years. This is not a job for anyone. Handlers must have a keen aptitude – both for working daily with animals and combatting crime. The matching process between man (or woman) and dog is extremely important.

Dog and handler can only function effectively if there is a true bond between them. Handlers need to be dedicated and loyal to their unit – and the relationship with their dog. They must be tough enough to handle the strain of combatting crime, and extremely fit to be able to keep up with a dog during operations.

The dogs were sourced by Invictus K9 from the Netherlands, the origin of some of the best dogs in the world for this kind of work. Training starts at about a year of age and is initially carried out at ministry’s Waterberg Law Enforcement Training Centre, which has the needed infrastructure, including staff housing and kennels.

Once the dog is ready to be deployed, proper transport is vital. These are not lapdogs. Each has its own travelling crate. The ministry is currently finalising a custom-built Land Cruiser that can accommodate the four dog crates, field equipment and the four handlers. The vehicle was sponsored by Standard Bank.

Once it is based in Etosha, the unit will play dual roles. It will be deployed as a reaction unit during anti-poaching events, and will carry out random spot checks of vehicles at all of the park’s gates. The unit has already proven its worth at roadblocks. And training sessions at Waterberg and in Etosha have shown that there is really no chance to outrun or evade the dogs once they are glued to a suspect’s scent.

These are first and foremost bush tracking dogs. That is where they are in their element. They’re so dedicated to their given task that they would work themselves to death if they were not exchanged. Which is why there are four dogs, trained to fly in helicopters and small aircraft, ready to be dropped anywhere to start tracking or take over from a tired team member.

The main funding for the development of the first unit was supplied by the United States Agency for International Development, the US Bureau of International Narcotics and Law Enforcement Affairs, and the US Fish and Wildlife Service.

Additional support is provided by a great range of agencies and individuals, both in Namibia and abroad. The K9 factor has another side – the dogs have captured the public’s imagination.

Public support is important, because, as Manie explains, this is just the beginning. Funding has been secured to develop a second unit, which will be based in north-eastern Namibia for deployment in the Kavango and Zambezi regions.

Nedbank and the US Fish and Wildlife Service have already pledged some of the development funds. A third unit is planned for central Namibia, as a highly mobile unit for deployment at roadblocks, airports, harbours, border posts and other strategic sites. Once fully operational, the K9 factor will be a formidable force against wildlife crime in Namibia.