By NewsroomOctober 26, 2020Conservation, Science and technology
No Comments 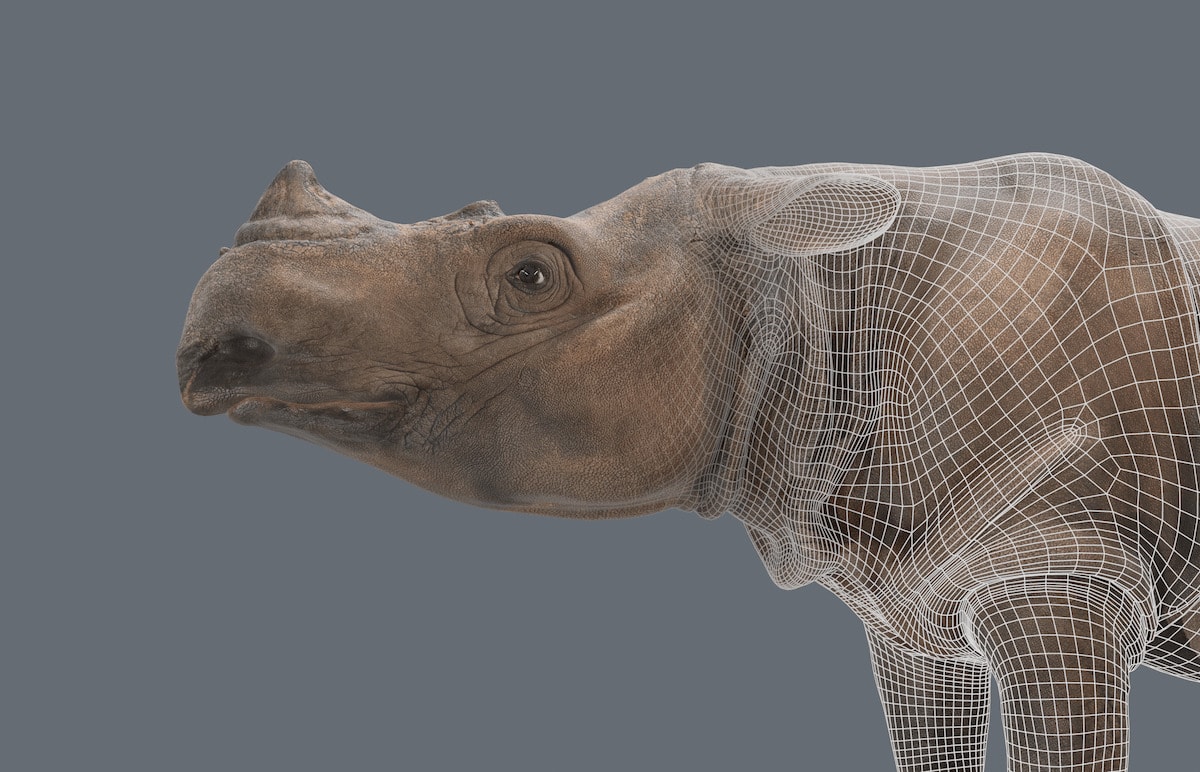 Original image as provided by Mongabay

There are only about 80 Sumatran rhinos remaining in Indonesia, and the biggest threat to the species is being so isolated that they can’t find others to mate with.

Jaskolski’s 3D scanning and AI technology can also be used for other purposes in conservation, such as species identification and anti-poaching efforts.

Lured with watermelon, Harapan, a 13-year-old captive Sumatran rhino moseyed into a metal-framed enclosure rigged with 24 cameras. When he stepped in front of the lenses, all of the cameras snapped at exactly the same millisecond, capturing a stereoscopic array of images.

Over the course of several days, Corey Jaskolski, an engineer, inventor, artificial intelligence expert and National Geographic Explorer of the Year, repeated this process over and over again until he had enough photos to create the first 3D digital copy of the critically endangered Sumatran rhino (Dicerorhinus sumatrensis).

“The idea behind this 3D scanning is that instead of just a flat 2D photo or video of the animal walking around, we could actually capture every single side and every bit of the rhino as a model,” Jaskolski told Mongabay. “For the viewer, we could put the rhino … in your room, walking around in front of you, which is what we did at the National Geographic Explorers Fest last year. We had a projection of the rhino appear in the auditorium, so that was during our panel on the Sumatran rhino, the rhino is actually walking through the crowd digitally on the screen.”

In 2018, Jaskolski started working with Sumatran Rhino Rescue, a project run collaboratively by National Geographic Society, the Indonesian government, and numerous partner organizations, aimed at saving the species from extinction through an ambitious captive-breeding program. Harapan, born in Cincinnati Zoo but now living at the Way Kambas Sumatran Rhino Sanctuary (SRS) in the Lampung province on the Indonesian island of Sumatra, is one of the rhinos the team is hoping to breed.

There are only about 80 individuals left in 10 fragmented populations in Indonesia, Colby Bishop, senior director of wildlife programs at the National Geographic Society, told Mongabay. The biggest threat to the species isn’t poaching, but being so isolated that they can’t others to mate with, she said.

“The longer [females are] alone … the less likely that they will be able to mate because they develop these polyps on their ovaries,” she said. “So this is really an emergency.”

Bishop said the Sumatran Rhino Rescue program wanted to use Jaskolski’s technology as a way to educate the public about the Sumatran rhino, especially since many people aren’t as familiar with the species as they are with the African rhino species.

“I think by having an ambassador like Harapan that you could potentially pull up on your phone, and have walk around your living room is a way to get that word out there, and to motivate people to actually want to try to do something, whether they’re changing their behavior or they’re supporting the project, or they’re telling their friends about the Sumatran rhino,” she said.

Before Jaskolski got involved with Sumatran Rhino Rescue, he was making 3D scans of static objects, such as Mayan human sacrifice victims and ice age bear skulls in flooded caves in Mexico. Performing a 3D scan of a living, moving rhino presented a new set of challenges for Jaskolski.

“The problem with rhinos is they move a lot,” Jaskolski said. “And so, we had to build a custom camera system with 24 cameras that would fire all 24 of those cameras in the same millisecond so that the rhino wouldn’t move between each camera firing.”

To do this, Jaskolski couldn’t rely on the cameras’ built-in timers, which wouldn’t fire fast enough to capture a moving rhino, so he needed to rely on a circuit box. He also needed lighting and a mounting system for the cameras. Altogether, the setup cost about $60,000.

Using such expensive equipment brought its own set of problems. It rained a lot, so Jaskolski had to always make sure the equipment was covered up. There was humidity, and mosquitos that got into the cameras. And then there was the issue of Harapan scratching his face against the bars of his enclosure, dangerously close to Jaskolski’s equipment.

“His big pointy ears and part of his face [was] going through the bars and almost knocking the whole camera array over, but … nothing got damaged,” Jaskolski said with a laugh.

In addition to photographs, Jaskolski took 4K video of Harapan to record how the rhino swooshed his tail, moved his head while eating, and generally moved around. Then, Jaskolski said, he used a software program that merged all of the images and video together, like a “bunch of stereo eyeballs looking at the world.” The result, he said, was better than he’d expected.

“As an engineer and inventor … you’re often, in fact, disappointed and think, ‘Boy, you know that could have gotten better,’” Jaskolski said. “I’m sure artists and other creatives feel the same way when they look at their own work. But the Sumatran rhino 3D scan was one of those rare ones where, as soon as [it was] on a computer screen … I was stunned.”

Three-dimensional scanning and artificial intelligence have other applications in the conservation world, Jaskolski said. For instance, the technology can be used in camera traps to recognize and immediately alert rangers if a certain animal, or even a poacher, walks past.

Jaskolski, who founded an AI and synthetic data company called Synthetaic, is now working with the Northern Rangelands Trust in Kenya to apply this technology to the group’s monitoring efforts, which can help ease the workload of rangers.

At the very worst, if all Sumatran rhino conservation efforts fail and the species ends up going extinct, the 3D scan of Harapan could help preserve the memory of the species, Jaskolski said.

“A 3D copy is an extremely poor replacement for the real animal, but I like to think of [it] as something by which we can remember our efforts and our failure,” he said. “As opposed to looking at yet another image of a dodo bird or a passenger pigeon [you would be] able to have an extinct animal that you captured when it was still alive, walking around in the room in front of you. I like to think that the power of that image will help us all recognize the importance of preserving the things that are still left.”