The true value of wildlife

By NewsroomApril 27, 2021Education
No Comments 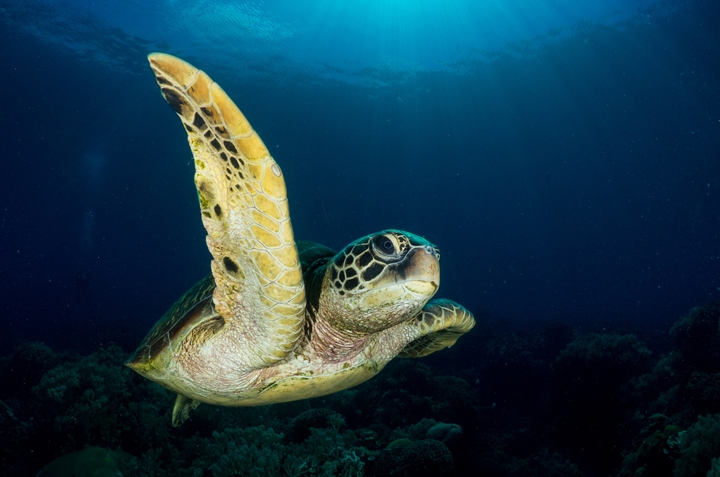 A green marine turtle, one of five species found in the Philippines. Image: As originally published by Business Mirror

At a local carinderia (eatery) that serves exotic dishes in Cebu City, an order of “power” is P80 to P120. This is almost twice the cost of ordinary viand available at the carinderia.

Interestingly, “power” is not on the menu and is offered discreetly to select customers.

It turns out “power” is a soup with marine turtle meat as the main ingredient.  It is popular among male customers of the carinderia because it is widely believed to be an aphrodisiac.

Meanwhile, at local pet shops, a blue-naped parrot is sold at P3,000 to P5,000, depending on its age.  The younger they are, the expensive they get.

Like the marine turtles that are hunted for their eggs, meat and other parts, the blue-naped parrot, a popular pet because of the belief it brings good fortune, is being pushed to the brink of extinction by the illegal trade in wildlife.

Department of Environment and Natural Resources (DENR) Administrative Order 2019-09, the updated list of Philippine threatened fauna and their categories, classifies the hawksbill turtle  and leatherback turtle as „critically endangered,“ while the loggerhead turtle, green turtle and olive ridley turtle as “endangered”.

The list also classifies the blue-naped parrot as “critically endangered.”

Marine turtles and the blue-naped parrot are also listed in the Convention on International Trade in Endangered Species of Wild Fauna and Flora Appendices, affording different levels of protection from over-exploitation.

Both species are also on the Red List of Threatened Species of the International Union for the Conservation of Nature.

While marine turtles are being slaughtered for their meat, shell, and other body parts, the blue-naped parrots are hunted for illicit pet trade targeting unique Philippine species.

Because of their behavior like singing and dancing while mimicking humans as they talk, parrots are high in demand by so-called “pet lovers.”

Even in Palawan, the country’s ecological frontier where these amazing birds used to thrive, the population of the blue-naped parrot is decreasing.

In illegal wildlife trade activities, Republic Act 9147, the Philippine Wildlife Resources Protection and Conservation Act or the Wildlife Act, the law that provides protection to essentially all wild animals in the Philippines, is violated.

Last month, the DENR released a study placing high economic use value to the endangered marine turtles and blue-naped parrots.

Based on the study, one marine turtle is projected to have an economic use value of P4.8 million throughout its 57-year lifetime.

Its economic use-value was based on its ecological role in the coastal and marine ecosystem, approximately P900,000 per turtle and on the tourism value it generates, pegged at P3.9 million per turtle.

The annual use value of the entire population of the Philippine marine turtle, which is conservatively estimated at 7,294 individuals by the DENR-Biodiversity Management Bureau (BMB) ranged between P2.89 billion and P3.19 billion.

Meanwhile, the study also showed that the blue-naped parrot, more commonly known as “pikoy,” is estimated to have an economic use value of P186,000 throughout its six-year lifetime.

The entire Philippine parrot population was estimated at 8,500 individuals, according to wildlife conservation group Katala Foundation. With that, its annual use value range between P36.23 million and P295.19 million a year.

While parrots, like other birds, are efficient seed dispersers and help make the forest healthy with the  all-important bird poop that fertilizes the soil,  marine turtles are known to feed on algae, nibbling them from corals, allowing corals to “breathe” and stay healthy.

Some marine turtle species are also known to feed on jellyfish, thus, acting as biological control agents in their natural habitats.

Marine turtles are also known to feed on seagrass, acting like nature’s lawnmower that cuts  and maintain seagrass bed, a special ecosystem where small fish play and feed, in good health.

As they feed on seaweeds and seagrass, marine turtles prune them, thus, making them grow faster, in the process, benefiting other species dependent on the same ecosystem.

Grace Diamante, executive director of the Mindoro Biodiversity Conservation Foundation Inc. (MBCFI), said  it is about time that the DENR give attention to the economic valuation of these species and of all significant species in the Philippines.

More than the economic value of species, Diamante said the valuation per square meter of key biodiversity areas, especially the protected areas, should also be considered by the government.

“The Build Build Build Program of the administration is beneficial to our economy and to Filipinos, but they should also weigh the long-term impact of these developments to the environment,” she told the BusinessMirror via Messenger on March 30.

Conducted through the DENR-Asian Development Bank (ADB)/Global Environment Facility (GEF) Project on Combating Environmental Organized Crime in the Philippines, the study aims “to recognize the bigger picture as the protection of wildlife not only keeps ecosystems balanced, but eventually benefits human well-being.”

In a statement released by the DENR with the study results, environmental economist Dr. Agustin Arcenas underscored the importance of economic valuation of resources in monitoring whether the steps to protect these resources are effective.

Moreover, he believes that the economic valuation of resources also helps evaluate the efficiency of projects and programs geared toward managing the resources, especially in situations where no other feasible metric currently exists.

In the same statement, Environment Secretary Roy A. Cimatu expressed hope the result of the study will allow “more people to be inspired in conserving and protecting our wildlife.”

“We hope that in popularizing the findings, we can entice more Filipinos to think about the long-term benefits of our wildlife, such as marine turtles and blue-naped parrots, and not just short-time gains,” Cimatu said.

A Good Way To Communicate ‘Value’

Emerson Y. Sy, a wildlife trafficking specialist at Traffic agreed with Cimatu, saying that economic valuation is a good way to communicate the “value” of wildlife to the public since money is a universal language.

“I agree that it will help in IEC [information, education and communication] to make people appreciate wildlife,” he told the BusinessMiror via Messenger on April 7.

However, Sy said that to deter poachers and illegal wildlife traders, the chance of being caught should be very likely and equates to better law enforcement.

He added that preemptive actions have more impact to conservation than law enforcement, and that the proposal to impose higher penalties may end up strong only on paper.

“The highest penalty on the current Wildlife Act is already P1.5 million for killing a critically endangered species, but it has never been utilized. Secondly, the inclusion of administrative adjudication might embolden wildlife traffickers since they can just pay a fine,” he said.

Sy suggested that the law should be clear when administrative adjudication is appropriate, citing for instance first-time offender with less than 20 animals involved in the crime.

“Unless it is very clear cut, it will be abused,” he lamented, citing what is happening in the fisheries sector.

Sy was referring to the apprehension of foreign nationals with dried seahorses worth P1.7 million in 2019.  The foreigners were given a slap-in-the-wrist penalty when fined with P15,000, and were released from detention.

“Besides the supposed higher fine than the market value, they [should have] underwent deportation proceeding as specified by the law,” he said.

Theresa Mundita S. Lim, executive director of the Asean Centre for Biodiversity (ACB), commended the DENR-BMB for the exercise in valuing nature, specifically wildlife, to include nonuse values.

Lim has been pushing for the economic valuation of natural resources during her 15-year stint as a former DENR top biodiversity official.

“We thought that total economic valuation of nature would be a good tool to help decision-makers in resolving conflicting proposals on land use (eg. mining and protected area),” Lim told the BusinessMirror via Messenger on April 7.

“Translating the value of wildlife into monetary amount will create a different kind of appreciation, hopefully attracting the attention of the finance and economic sector to invest in nature and biodiversity,” she added.

Moreover, she said the economic valuation study which estimates the true value of wildlife is a good basis for estimating penalties for violations of wildlife laws, such as poaching and illegal wildlife trade.

Lim pointed out that there is no science behind the current estimates for the fines and penalties in the current law, “except that we knew we had to have higher penalties and fines for violations vs critically endangered species” as compared to those of lower conservation status.

With the study, she said this time the valuation can provide a good rationale for the estimation of fines.