The White Rhino—a Beacon of Hope

By Peter BorchertSeptember 30, 2020Editorial
No Comments 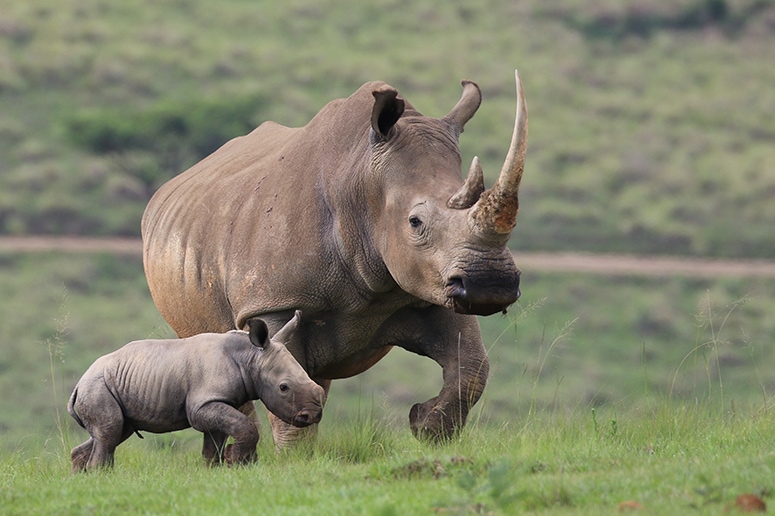 As a species, we have the most frightening ability to destroy the natural world—there is no shortage of data to back that statement! Yet, we are also capable of the most extraordinary feats of rebuilding and reconstruction. Few examples tell this as eloquently as does the story of the White Rhino.

Somewhere around 10 million years ago, the ancestors of African rhinos found their way from the eastern Mediterranean region into northern Africa. They must have sensed the continent’s potential, for over the next three million years or so, they had wandered down much of its length. We know this from fossil remains found not far north of Cape Town. Some would have settled more happily in grassier habitats, while others adapted to more bushy environments and became browsers. This early specialization led the rhinos to split into two distinct species. Their divergence, about five million years ago, gave rise to the Black Rhino, which browses on shrubs and herbs, and the White Rhino that almost exclusively eats grass.

In these pre-historical times, the White Rhino would have roamed widely throughout the African savanna regions. Quite what forces of nature drove the process are uncertain, but about a million years ago, the White Rhinos had split into two widely separated subspecies: one in northern Central Africa and the other in Southern Africa. Some biologists argue that the length of separation, coupled with morphological differences, justifies their recognition as two distinct species, but others dispute this.

For many, many centuries, the two White Rhinos would have lived their lives with little or no interference from our kind. But that was to change very quickly. Fast forward to 1900, and the world population had risen to some 1.7 billion, and the face of Africa had been dramatically altered politically and economically by the plundering powers of Europe.

Globally, rhinos were not doing well, and already many subspecies had succumbed. In Africa, the Northern White Rhino had only recently been made known to the scientific world. Its was described as “locally common” within a range that extended across western Uganda, south-west Sudan, the eastern parts of Central African Republic, northeastern DRC, and to Lake Chad in the west.

Certainly, its numbers were healthy compared to the Southern White Rhino that had once roamed throughout the bushveld areas of northern and northeastern South Africa, into Eswatini and Mozambique and across much of Botswana into central Namibia.

At the end of the 1800s, the Southern White Rhino was in dire straits. Its numbers had been decimated by trophy hunting, the expansion of farmland, and mining as well as other human activities. In fact, it was thought to be extinct. Then, in 1894, some 20 individuals came to light in what is now South Africa’s KwaZulu-Natal Province, in an area that was once the royal hunting ground of King Shaka, the warrior founder of the Zulu nation. Their unexpected discovery led to the establishment in the following year of the Umfolozi and Hluhluwe Reserves, primarily to protect the remnant rhino population.

The rhinos prospered there, and by the late 1950s, they numbered about 1,000. So well were they doing that there were fears that they had begun to outstrip their available food. Instead of resorting to culling—which for many decades to come would be standard game-management practice in Southern Africa—the “excess” rhinos would be moved back into suitable habitats elsewhere in Africa.

Spearheading this brave effort was Dr. Ian Player and a small team that included Player’s mentor Magqubu Ntombela, John Clark and Toni Harthoorn. Harthoorn was a veterinary scientist who had recently helped save wildlife from being trapped by the rising waters of the newly completed Kariba Dam on the Zambezi River. He began to experiment with drugs to subdue rhinos before their transportation to new homes. This led to the development of “M99”, an immobilizing drug that changed the face of big game capture and translocation, and is still widely used today.

And so began Operation Rhino. Over a decade or so, White Rhino populations were re-established across Africa. Within six years of its launch, more than 600 individuals had been moved, and by the end of the 1900s, close to 1,300 had found new homes.

Although the Kruger National Park is now the epicenter of White Rhino distribution, the Hluhluwe-Imfolozi Park remains a stronghold for the southern subspecies. What a conservation triumph. The initiative that began nearly six decades ago saw Africa’s Southern White Rhinos rebound to more than 20,000 across Southern Africa and as far afield as East Africa.

In the 1960s, just as Southern White rhino numbers began their resurgence, poaching devasted their northern cousins. Northern White Rhino numbers crashed to some 2,360 survivors. And tragically, there was no triumphant recovery for the northern gene pool, and today only two elderly females remain. Their eggs, some frozen sperm from the now-deceased last male, and the ingenuity of veterinary science are all that stand between them and extinction.

Sadly, the White Rhino has again been under siege. The current poaching crisis has taken a terrible toll on White Rhino numbers. For the first time in over a century, their population has declined. Notwithstanding this setback, nothing can detract from the proud achievement of Operation Rhino, which is so rightfully heralded as one of the greatest conservation successes of all time. It is a beacon of hope for the future. It so eloquently demonstrates what can be achieved with focused will and determination.