Tigers, elephants and rhinos in danger from ‘unprecedented rate’ of deforestation

By NewsroomFebruary 18, 2022Land conservation
No Comments 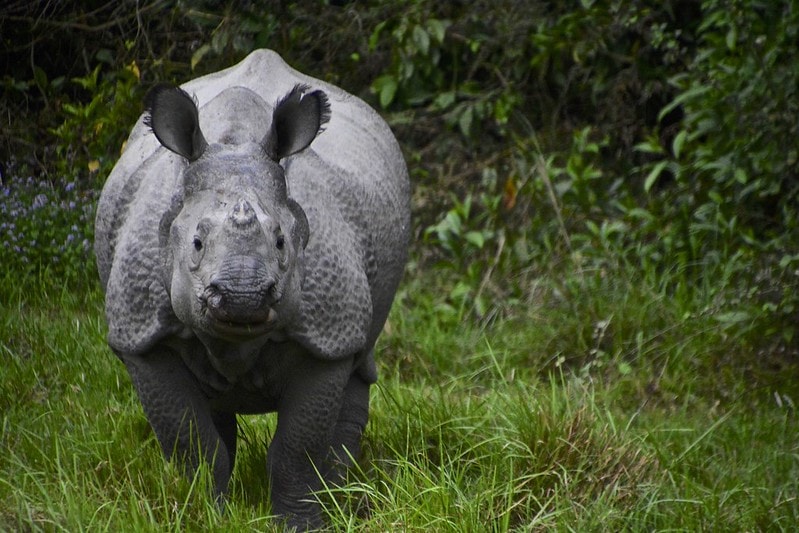 Nepal’s Chure region is rich in wildlife like rhinos, but their future is under threat. Image: Antonio Cinotti/Flickr

The subtropical lowlands of Chure are rich in biodiversity and home to 6,500 species of plant, 181 mammals, 862 birds and 640 butterfly species.

But wildlife and the indigenous communities living alongside them are under threat from an “unprecedented rate” of deforestation.

New species are still being discovered but others, like the sloth bear, are now endangered.

“The Chure Region mostly remained forested until the 1950s, but with the human population increment, deforestation in Chure forest is occurring at an unprecedented rate,” a major report by the National Trust for Nature Conservation says.

Iraj Poudel, a local from the area, adds: “The forest that was dense yesterday is eroding today. There are more concrete buildings now than ever before.”

The Chure belt, which stretches across Southern Nepal, spans 18,982 square kilometres – only slightly smaller than the entirety of Wales.

Chure has protected areas but the majority (76%) of the forests fall outside of this area, so vital habitats are at risk.

Locals say they are witnessing native wildlife disappearing, being forced out of their habitats due to increasing human activity.

Ram Katel, a resident, told the Kathmandu Post: “The encroachment of the Chure region has affected both humans and wildlife that are dependent on the region for sustainability.”

He told the newspaper: “If the exploitation and excavation of the Chure continues, the long-term consequences will be fatal to the environment and the wildlife.”

The area is biologically, environmentally and economically very important to Nepal.

Demand for raw materials and minerals to be extracted from the ground has created a “crusher industry” in the region, referring to the machines that are commonly used to extract large rocks from rivers.

This process affects the flow of the water in the region’s rivers, increasing the risk of erosion and landslides.

Deforestation in Chure is also contributing to soil erosion.

When the top layer of soil is unstable, it can’t retain any water that falls on it and results in an increased surface run-off, which in turn creates a bigger risk of flooding.

Communities living downstream have been devastated by floods and landslides.

And plans to open a new international airport in Nijagadh, a town in the Chure region just 80 miles from the major airport in Kathmandu, will have a detrimental impact on Chure’s ecosystem, campaigners say.

Talks to open the airport began 28 years ago but it is finally set to open this year.

Author and researcher Uktam Babu Shrestha said that the airport would have “a huge environmental impact” not only during the construction process but also in its operation.

“Environmental impact assessment is not just about calculating the number of trees that can be seen with the naked eye,” says author and researcher Uktam Babu Shrestha.

Environmentalist Bhesraj Thapa says Nijgadh, the heart of the Terai Madhes, home to wildlife and birds, absorbs about 23 percent of the carbon.

He said: “Nepali people have a very close relationship with the Chure-dependent forest.

“Nepalis will remain only if the Chure is protected, otherwise it will definitely disappear.”

The heat is increasing in the lower belt of Chure every year and the farmers are suffering due to low or heavy rainfall.

Citing the example of floods caused by unseasonal rains, Thapa said that the government and people should be vigilant to protect forests and Chure.

“Looking at the livability index of big cities, including Kathmandu, the development of haphazard road construction in villages, the condition of rivers, the quality of air, drinking water and vegetables, the picture is one of devastation,” said Shrestha.

“The government should come up with a plan to save Nijgadh’s forests and Chure, not destroy it.”