Time is running out for Southeast Asia

On Nov. 23, the last Sumatran rhino (Dicerorhinus sumatrensis) in Malaysia died. Named Iman, she’d lived in captivity in the Malaysian state of Sabah in Borneo for just over five years. Iman was not only the last rhino in Malaysia, but one of the last of the Bornean subspecies of the Sumatran rhino (D. s. harrissoni).

But Iman’s passing isn’t just another tragedy, and lost opportunity, for her species. It’s also another signal for something bigger: that the heart of our mass extinction crisis lies in Southeast Asia.

The region is undergoing a wildlife decline that’s really unparalleled anywhere else of comparable size. Recently, scientists have declared that tigers are extinct in Laos, after already vanishing from Vietnam and Cambodia. The Indochinese and Malayan populations of the tiger (Panthera tigris tigris) and the Sumatran subspecies (P. t. sondaica), are all on their last stand. The same is true of the Indochinese leopard (Panthera pardus delacouri).

Meanwhile, the last photograph of a saola (Pseudoryx nghetinhensis), or Asian unicorn, on camera trap was taken six years ago. There is now a project hoping to catch and breed them in captivity. But whether conservationists will find any alive anywhere is an open question — officially a couple of hundred are believed to survive — and whether they will find enough to form a captive-breeding population is an even bigger question.

The list goes on: all the big four of Sumatra – elephants, tigers, orangutans, and rhinos – are Critically Endangered. The Tapanuli orangutan (Pongo tapanuliensis), discovered only in 2017, is existentially imperiled by the Batang Toru dam project in the only home it has. Of the 16 gibbon species evaluated by the IUCN, 15 are listed as Endangered or Critically Endangered. At best, fewer than 200 Philippine crocodiles (Crocodylus mindorensis) survive while the Yangtze giant softshell turtle (Rafetus swinhoei) is down to only three known individuals, all of them in separate locations.

Tigers, elephants, rhinos, orangutans, leopards, tapir, banteng, dholes — all of the species within these groups are either classified as endangered or critically endangered in the region. In the last 100 years, we’ve already lost the Bali and Javan tigers, and the mainland subspecies of the Sumatran rhino (D. s. lasiotis) as well as the Vietnamese Javan rhino (Rhinoceros sondaicus annamiticus). The kouprey (Bos sauveli), a giant wild ox, has not been seen since 1988 and is probably extinct. Southeast Asia’s megafauna are undergoing a decline likely not seen since the Pleistocene some 15,000 years ago.

But perhaps even more worrisome is that it’s not just the big animals: increasingly it seems like every living animal in the region is imperiled. Innumerable turtle species are being wiped out for food and traditional medicine. Birds are being hunted out of existence to be eaten or traded as illegal pets, even as they lose their forests and wetlands. Meanwhile, many smaller animals, from the slow loris to the pangolin, are being decimated by the illegal wildlife trade.

If you look at data from the IUCN Red List, Southeast Asia also stands out for its sheer numbers of identified threatened species (most remain unidentified at this point). The three nations with the most globally identified threatened species are Madagascar, Ecuador and the U.S. — not surprising, given the first is full of megadiverse and endemic biodiversity, the second contains perhaps the most biodiverse region on Earth, and the third is among the most well-studied and largest nations. But fourth and fifth on that list are Indonesia and Malaysia, respectively. Vietnam, Thailand and the Philippines each have more than 600 identified threatened species, putting them on the very high side worldwide. Laos and Myanmar have considerably less, but that’s probably largely due to less research into their species. 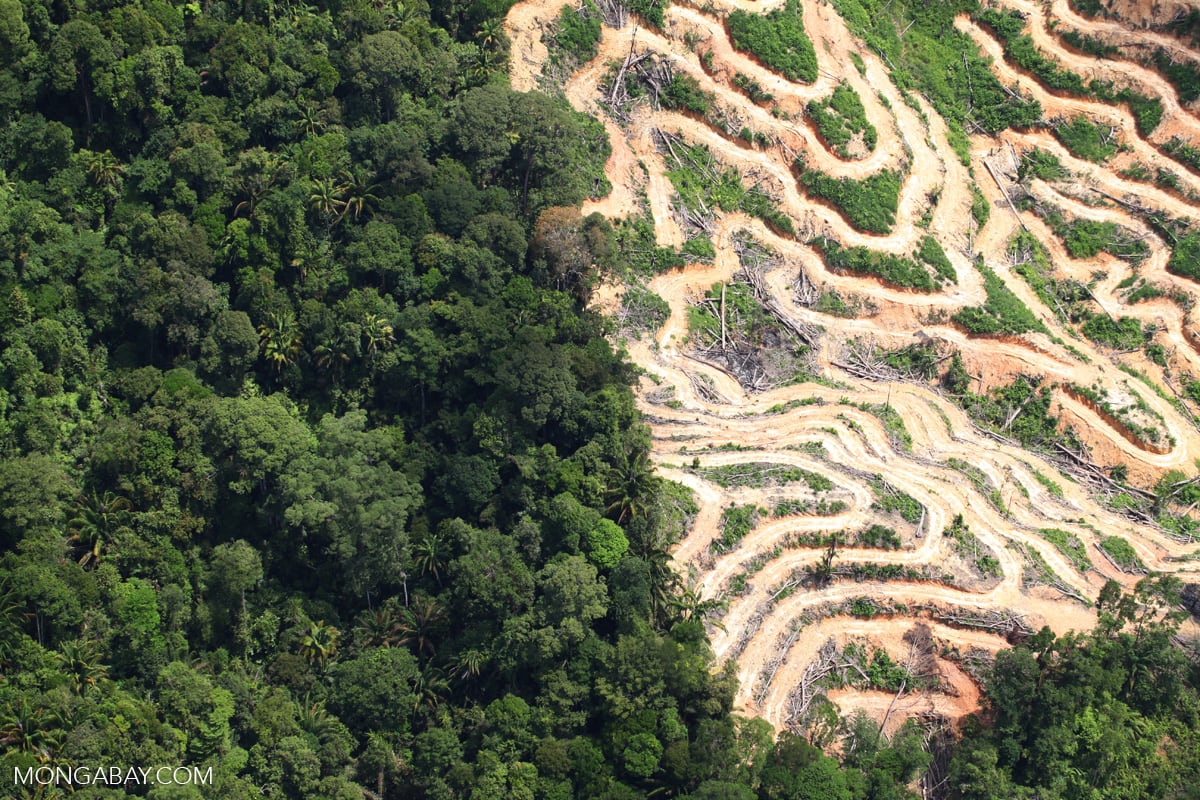 Original photo as published by Mongabay: Deforestation in Borneo. Image by Rhett A. Butler

Let’s not forget that Southeast Asia is the region for which the term “empty forest” was coined, denoting a landscape so stripped of animals, so exploited, that while trees and plants may still grow, nothing moves larger than a mouse or a praying mantis. There is little to no bird song, no monkeys crossing the canopy, few mammals in the undergrowth. It’s more a park than a wilderness, and those plant species that are dependent on animals will soon vanish.

The reasons that Southeast Asia is facing an extinction crisis are varied, complicated and, in some cases, unique to each country. But themes emerge. Number one: deforestation. Nowhere else in the world have humans destroyed so much forest so rapidly — all to provide commodities like palm oil, lumber, rubber, paper, tropical wood — in a global economic system whose foundations are waste and consumerism.

For another, there is the truly malignant illegal wildlife trade for Chinese traditional medicine, bushmeat, pets and trinkets. This market has increasingly turned from using guns and bullets to deploying millions of snares, killing indiscriminately across the region’s national parks and last intact wildernesses.

Finally, the human population of Southeast Asia stands at around 655 million. This is more than 8 percent of the world’s population across eleven countries covering only around 4.5 million square kilometers (1.7 million square miles). That’s a region half the size of the U.S. with double the number of people. Southeast Asia’s population, however, is within a generation or two of peaking in places; both Malaysia and Vietnam, for example, now have fertility rates at or below replacement levels. Laos has the highest in the region (2.7 children per woman), Singapore the lowest (1.16). This is a glimmer of light for the region’s natural resources and beleaguered wildlife, if only it can hang on.

But it may not be enough time for many. No species, no matter how resilient, can stand up indefinitely to the relentless harrying and industrialized destruction. The number of victims grows greater every year, many as yet unidentified.

So, the citizens of Southeast Asia have to make a decision: Are they OK with losing their iconic species to plantation companies, unscrupulous poachers, sham medicine, and tacky status symbols? Are they OK with nature conservation remaining at the bottom of their governments’ priorities amid such a scale of loss? Are they OK with this generation squandering their children’s natural inheritance, just as recent generations have gambled away our climate stability?

There is no doubt the region faces economic and development challenges — and tough decisions. But let’s not pretend this mass death is about smart development or poverty reduction. Singapore is one the wealthiest countries in the world, while Malaysia has less extreme poverty than the U.S. Poverty rates in Laos, Cambodia and Myanmar are still high, but have plunged in recent years.

Nor does the vast destruction of forests and wildlife do much, if anything, for public wealth and well-being. Most of the money from slaughtered wildlife goes not to the local people doing the hunting, but to a black market and regional mafia that’s also involved in trafficking humans and drugs.

Meanwhile, the destruction of the region’s remaining forests, including intentional burning, is often fueled by foreign companies and corruption, and increasingly goes against local wishes (the only time palm oil is really economically beneficial to the public is via smallholders).

In an age of rapid climate catastrophe, surely no economy can survive on the burning of peatlands and destruction of its few remaining rainforests? We can no longer develop just for the sake of “development.” Smart development and conservation of natural resources must be the future, not just in Southeast Asia, but everywhere.

What needs to be done in the region? A lot. And I don’t begin to pretend to have all the answers. But a good place to start would be the region’s governments taking this extinction crisis (and the climate one) seriously and spending more resources on law enforcement and protecting standing forests. At the same time, gains must continue to be made on changing public views on the wiping out of wildlife for sham medicine.

The region’s national parks and wildernesses require better management and more boots on the ground. It may be time for a regional equivalent of something like African Parks to be established in Southeast Asia, an idea recently raised to me by the conservationist Niall McCann.

Conservation groups in the area, especially the small, on-the-ground organizations, desperately need only more funding and resources. Ambitious ideas and bold commitments are needed now more than ever from the international community. And we must also consider more extreme options more quickly. We should not wait decades to install captive-breeding operations, for example, but should begin building insurance populations for many of the near-extinct species as possible. Let’s use the Sumatran rhino and the saola as examples; for both species, conservationists probably delayed much longer than they should have.

Let’s not kid ourselves. None of this will be easy and all of it will require public support. We get the leaders we vote for. The public in this region need to decide if it’s worth saving their orangutans and tigers, their elephants and rhinos, their pangolins and dholes. There is still time today. But there may be none tomorrow.

Iman’s death closes another door for Sumatran rhino conservation, leaving only a single known Bornean individual of the Sumatran rhino left on Earth, and one less female for a species that at best numbers only around 80 animals.

If aggressive change isn’t made, one day soon Indonesians and Vietnamese, Filipinos and Malaysians, will wake up and find there is nothing much left of their forests — their whole region will be truly empty. It will no longer just be empty forests, but empty landscapes from the Mekong Delta to Sumatra, and the Cardamom Mountains to the Cordillera Central.