By NewsroomJuly 20, 2021Rescue and rehab
No Comments 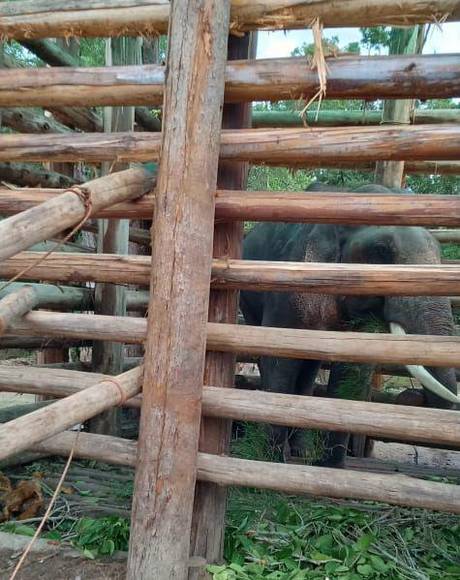 Elephant Rivaldo in a kraal. Image: As originally published by The Hindu.

The Tamil Nadu Forest Department will shortly develop a standard operating procedure for the capture and release of wild elephants based on science and best practices, said Shekhar Kumar Niraj, PCCF and Chief Wildlife Warden.

In the proceedings on the release of wild male elephant Rivaldo from Vaazhaihottam check-post of Mudumalai Tiger Reserve back into the wild, he has made an elaborate note after visiting 28 camp elephants housed in two camps at MTR and interacting with the mahouts and cavadies.

It appeared that the decision of capturing Rivaldo was taken after demands by some sections of the public. Keeping fully adult elephants in a small kraal and attempts to train a fully mature, healthy, and hefty adult elephant could be at times defeating the science of elephant ecology, he noted. Despite his disabilities, Rivaldo appeared to be in a healthy condition and very intelligent. And it is to be noted that that there is not even a solitary instance of it attacking humans or indulging in crop-raiding, he said.

The argument that this male elephant would be vulnerable to poaching because of its high visibility and close proximity is not a valid argument as this is not the only tusker in the area. There are several other tuskers in its home ranges and they too forage in close proximity to the same villages. Although they are not habituated to people or taking food from people, they are as easily accessible as Rivaldo is to local people who know these tuskers and the area, he pointed out.

The Asian elephant species in Tamil Nadu has shown signs of population decline to an alarming level in the decades 2000s to 2010s and beyond, which is another reason why Rivaldo should be sent back to the breeding population in the wild, he said.

Compared to the costs to be incurred in capturing, training and maintaining this elephant in captivity, managing it in the wild will be far less expensive and also conservation and ecology friendly, he noted.

Another reason for ordering the release of Rivaldo is that the process of kraaling and training an adult into captivity could be generally tortuous and scientifically not well established, and ecologically damaging. At 36-40 years, Rivaldo may not be the right candidate for any kind of training or taming exercises which may not be successful and could make the animal very aggressive, he said.

Detailing these points and a few more, the TN Chief Wildlife Warden has emphasized the need for an SoP for the capture and release of wild elephants, which will be done shortly.