To prevent next coronavirus, stop the wildlife trade, conservationists say

By NewsroomFebruary 20, 2020Anti-poaching, Conservation
No Comments

The coronavirus spreading from China has sickened at least 73,000 people and killed at least 2,000, setting in motion a global health emergency. But humans aren’t the only species infected.

Coronaviruses attack a variety of birds and mammals. The new virus seems to have leapt from wildlife to humans in a seafood and meat market in Wuhan, China, where live animals were slaughtered and sold as food.

That’s a familiar story. The SARS epidemic, also caused by a coronavirus, began in China with the consumption of a catlike animal called the palm civet. The MERS epidemic began with a coronavirus transmitted to humans from camels in the Middle East.

In the spread of yet another coronavirus, conservationists see a public health lesson: If you want to prevent epidemics that begin in animals, halt the global trade in wildlife.

“This issue is not just a conservation issue anymore,” said Grace Ge Gabriel, Asia regional director of the International Fund for Animal Welfare. “It’s a public health issue, a biosafety issue and a national security issue.”

China is a linchpin in the illegal trade. Last month, as the coronavirus spread, the central government in Beijing issued a nationwide but temporary ban on all trade in wild animals, including their transport and sale in markets, restaurants and via online platforms.

The government order warned that officials would “severely investigate and punish” violators and provided a hotline for citizens to report infractions. Officials in Beijing now have drafted legislation to end “the pernicious habit of eating wildlife,” according to a statement released on Monday by the standing committee of the National Peoples Congress.

Chinese citizens are “angry because they’ve learned that wildlife traded for food has once again caused a national health crisis, and because a small number of wildlife traders continue to hold the entire country hostage,” said Peter Li, an associate professor of East Asian politics at the University of Houston-Downtown who specializes in China’s domestic policies.

Experts still do not know which species transmitted the new coronavirus, technically called SARS-CoV-2, to people. But pangolins, also known as scaly anteaters, are now the leading suspects.

The world’s most trafficked mammal, pangolins are barred from international trade and are protected domestically in China. But pangolin meat and blood are considered delicacies on the black market, and sales of their scales for use in traditional Chinese medicine remain legal for certain hospitals and pharmacies. 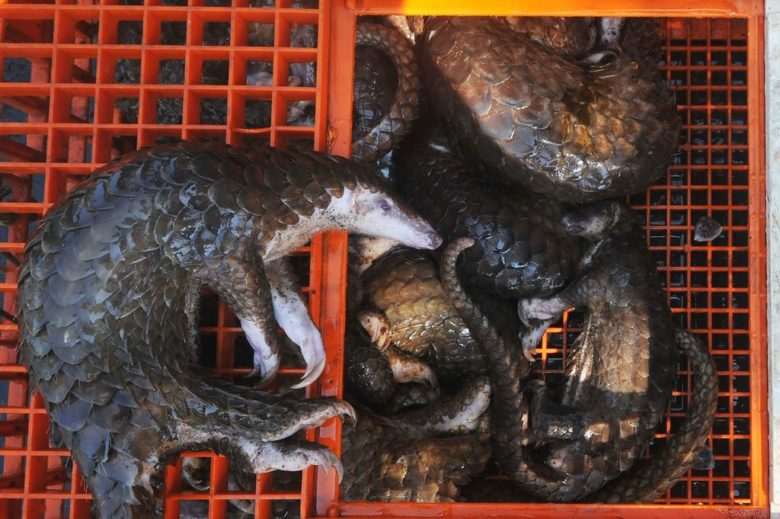 Original photo as published by The New York Times: More than 5,500 species of birds, mammals, amphibians and reptiles — many threatened and endangered — are sold worldwide. Credit…Gatha Ginting/Agence France-Presse

Whatever the source turns out to be, the new ban on wildlife trade comes too late to stanch the spread of this latest coronavirus.

“Now that human-to-human transmission is happening, the ban has no real consequence for this outbreak at all,” said Christian Walzer, executive director of health at the Wildlife Conservation Society.

The government’s ban also lasts only until “the epidemic situation is lifted nationwide,” according to the government’s order. Dr. Walzer and others believe that the ban needs to be permanent if it is to have any effect on reducing the risk of future zoonotic diseases.

“Otherwise, we’ll be having this conversation at regular intervals,” he said.

During the SARS epidemic in 2003, China enacted a narrower wildlife trade ban. Many conservationists and medical professionals, including members of the Chinese Academy of Sciences, hoped it would be permanent, but the trade roared back after the crisis ended.

“Once a disease jumps into humans, all the responses are reactive and the focus is on human health,” said Dr. Alonso Aguirre, a wildlife ecologist at George Mason University.

After the crisis passes, attention turns away from the trade that brought the disease to humans, he added. Scientists have been calling for permanent restrictions for at least three decades.

“We never go back to the source of why these things happen in the first place,” Dr. Aguirre said.

China and Southeast Asia are hot spots for emerging zoonotic diseases, pathogens that naturally occur in wildlife and find their way to domestic animals and humans through mutation or new contact.

Biodiversity loss, combined with high rates of deforestation, raises the risk of these infections by bringing people and livestock into contact with wildlife, and by altering the environment to favor transmission of certain diseases, such as malaria, Zika and dengue.

Demand for animals and their parts — to eat or for use in traditional medicine — carries potential pathogens far and wide.

But the coronavirus outbreak has not snuffed out demand for wildlife, according to the Environmental Investigation Agency, a nonprofit group based in London that researches and campaigns against environmental crime.

Even now, some online sellers in China and Laos are touting illegal traditional medicines containing rhino horn and other animal parts as cures for coronavirus, the group found. Some cite a document issued last month by China’s National Health Commission that lists traditional animal-based remedies as recommended treatments for coronavirus infection.

No one knows the full scope of wildlife trade worldwide, but the numbers are staggering — on the order of millions of animals of hundreds of species trafficked each day, according to Vincent Nijman, a wildlife trade researcher at Oxford Brookes University in England.

While some wildlife trade is illegal, much of the hidden industry comprises legal, oftentimes unregulated trade of unprotected species like rodents, bats, snakes and frogs. Wildlife trade in Asia is especially risky to human health, because these animals are often transported and sold live.

“Even if one of these jumps is a rare occurrence, there are millions and millions of contacts that occur every day in these types of markets,” said Andres Gomez, an ecologist and veterinarian at ICF International, a global consulting services company based in Virginia. “You’re playing with fire.”

Live meat markets are perfect laboratories for creating new viruses. Stressed animals shed more viruses and are more susceptible to infections, and cages are often stacked on top of each other, facilitating exposure.

“You have a bird pooping on a turtle that poops on a civet,” Dr. Walzer said. “For getting new viruses to emerge, you couldn’t do it much better even if you tried.”

Basic hygiene is usually lacking as well, Dr. Nijman added: “The same chopping block is being used for every piece of meat, the same knife for all species. No one is washing their hands.”

Increasingly varied species and populations are mixed at markets. Better transportation — and the fact that many local species have disappeared — means that wildlife is imported from an ever-larger radius. Newer exotic species are frequently introduced for trade, as well.

This diversity was reflected at the market in Wuhan where the new coronavirus originated. A single meat shop there sold live peacocks, rats, foxes, crocodiles, wolf cubs, turtles, snakes, wild pigs and more.

“The billboard from that store advertised feet, blood, intestines and other body parts from over 70 species,” said Ms. Gabriel, of the International Fund for Animal Welfare. “It’s staggering.”

In Guangdong Province in 2003, these shops were temporarily shuttered as SARS emerged. Wildlife trade and consumption declined in the immediate aftermath, but the business resumed within about a year, despite calls for a permanent ban.

“China should not have forgotten the pain after the wound was healed,” Dr. Li said.

Some experts believe that a complete ban on wildlife trade is neither necessary nor practical.

“Wildlife trade is not some horrific habit people have, something awful that shouldn’t be done,” said Peter Daszak, president of the EcoHealth Alliance, a nonprofit research group in New York City. “It’s a deep-seated part of human culture.”

Rather than ban all wildlife trade in China, he and other scientists have called for strictly monitored captive-breeding of certain wild species.

Additional measures could include a permanent trade ban on certain high-risk species, like bats, and the introduction of “a series of common-sense hygiene and welfare rules,” Dr. Nijman said.

Other scientists argue that without a full and permanent ban on wildlife trade, it is only a matter of time until the next virus emerges.

“Unless something changes, this is just one in the series,” Dr. Gomez said of the current coronavirus epidemic. “We have to decide as a society if we’re comfortable maintaining the risk that the next one is one that kills most people who get infected.”

China’s government has the power to permanently ban all wildlife trade, Dr. Li noted. But he is not optimistic that it will happen.

The country’s wildlife policies are based on “the premise that wildlife is a natural resource to be utilized,” he said, and officials tend to view nature through an economic rather than ecological lens.

“The Chinese government has created an enormous problem for itself by encouraging wildlife use,” Dr. Li said. “Now it must choose whether to favor the economic interests of a small minority, or to favor the public health interests of 1.4 billion Chinese people and the world.”