By NewsroomOctober 18, 2021Wildlife Trade
No Comments 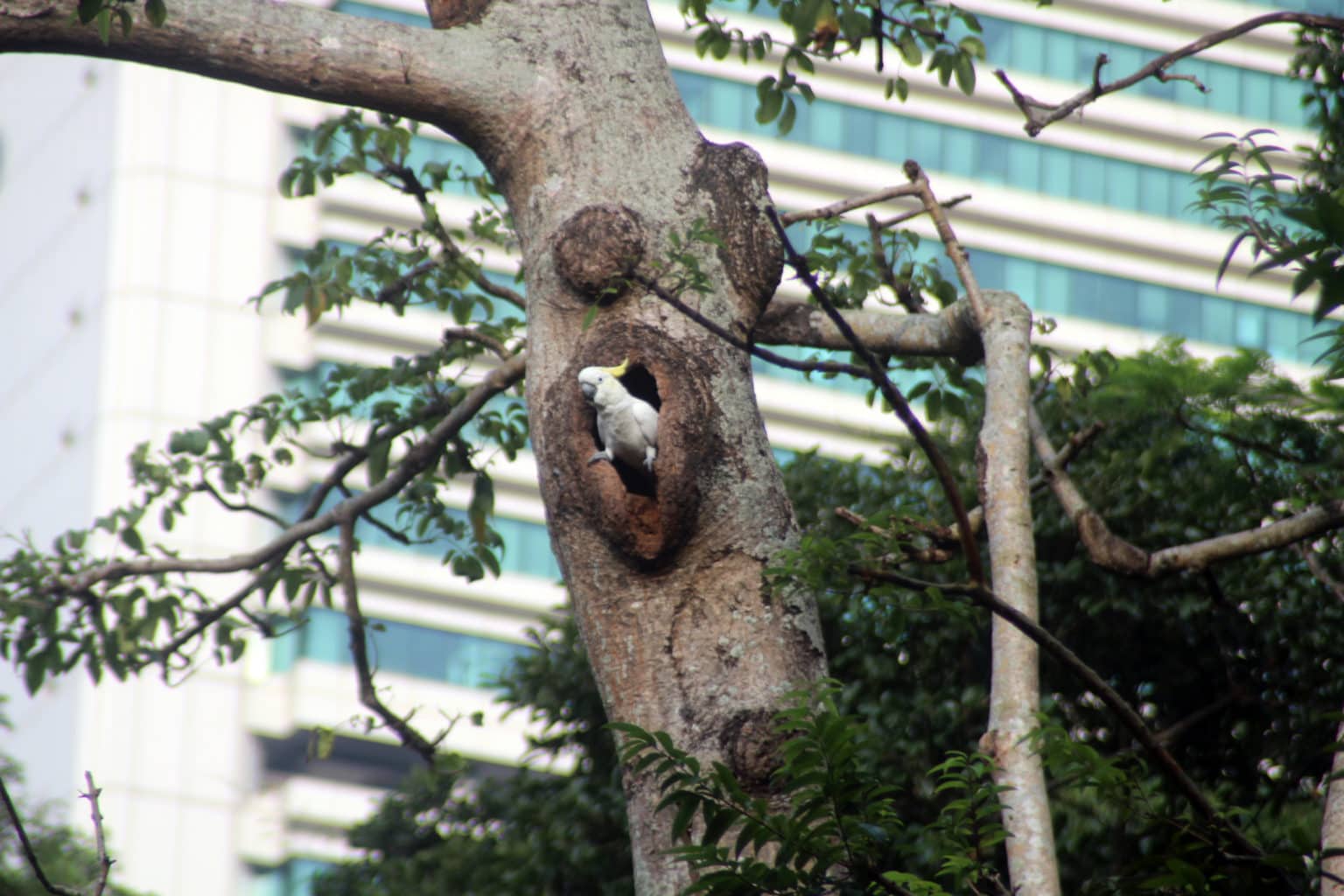 Cockatoos nest in tree cavities, many of which are found in the urban parks in Hong Kong’s city centre. Image: Astrid Andersson/As originally published by Mongabay.

For pet enthusiasts, buying an exotic, rare or endangered species can be done legally, and many pet owners want to obey the law. The problem is that illegally obtained animals, captured from the wild, are often mixed in with legally obtained animals, making them indistinguishable to a buyer. Moreover, sellers sometimes lie about a pet’s true origins.

To combat this, researchers from Hong Kong University have developed a forensic tool that could help both officials and pet buyers know the truth about an animal’s origins.

“Imagine the government going to the bird market and requiring samples from bird owners and you could test to see whether these birds have actually been captive-bred or not,” said Caroline Dingle from Hong Kong University, co-lead author of a recent study in Animal Conservation that describes the technology.

For now, Dingle and her colleagues have only developed the tool for one species — the yellow-crested cockatoo (Cacatua sulphurea), a critically endangered parrot native to Indonesia — but it could be developed for other species.

If the technology is fully realized and applied, it would mean a massive step toward properly identifying illegally captured animals and cracking down on the illegal pet trade.

It’s all in the diet

To uncover an individual bird’s origin, the researchers turned to stable isotope analysis, a technique previously used for research ranging from bird migration studies to the diets of prehistoric humans.

Stable isotope analysis allows researchers to see the levels of carbon and nitrogen present in a cockatoo’s feathers, which is influenced by the animal’s diet. The difference in these levels between wild and captive cockatoos is wide enough to from a single feather, and works due to the fundamental differences in the diets of wild and captive-raised cockatoos.

The researchers specifically used feathers because they are inert tissues, meaning the isotope values detected from them represent the diet of the bird when the feather was growing. This offers a view of the bird’s diet over a long period of time, which helps determine if a bird was born in captivity or stolen from the wild.

Sometimes the stable isotope analysis isn’t conclusive enough. It requires grinding up the bird’s feather, which is then tested for the average nitrogen and carbon levels. When the differences in just carbon and nitrogen values are too ambiguous, the researchers turn to compound-specific isotope analysis.

This analysis allows them to examine the carbon values of the specific amino acids of a specimen, giving them more data to determine if the bird was wild-caught or captive-bred.

“Instead of getting one value from the tissue, you can get 10 to 12 values from the tissue,” Dingle said. “We know that the isotopes from those amino acids represent something in their diet.”

To test the forensic tool, the researchers collected feathers from captive and wild populations of yellow-crested cockatoos in Hong Kong, noting if the bird was wild or captive. The species isn’t native to Hong Kong, but a local population now exists due to the release of birds, both accidental and deliberate, from the pet trade. The researchers conducted their isotope analysis on these feathers and were able to identify the bird’s origin even from random samples.

Surveying bird markets, the researchers found more yellow-crested cockatoos for sale than had been legally imported over the past 13 years, according to data from CITES, the global wildlife trade convention. The new forensic tool could identify the true origin of these birds, as there are often reports of poachers stealing the protected cockatoos right out of nests in Hong Kong.

The illegal wildlife trade is massive. A 2016 United Nations report valued it at between $7 billion and $23 billion per year. Punishment can be severe in some countries: five to 10 years in prison in the U.S., and 10 years in jail and a $1.2 million (10 million Hong Kong Dollars) fine in Hong Kong. However, in many countries, convictions of such crimes are rare, and penalties often light.

Although the forensic technology successfully distinguished between wild and captive-bred cockatoos based on the collected feathers, the researchers say there’s still work to do before governments should start implementing this testing.

On the upside, stable isotope analysis is cheap and fast compared to other types of testing, the researchers say. Once you have a tissue sample, in this case a feather, and the machine necessary to carry out the analysis, the results are ready by the next day.

However, the compound-specific isotope analysis is somewhat of an emerging technology, meaning acquiring the necessary machinery is more difficult. Additionally, this deeper look requires a few weeks to yield a result, but Dingle said that’s still quite fast compared to other types of testing.

Dingle said the next step is simply more testing. Speaking as a self-described “overly cautious scientist,” Dingle said the technology is novel and exciting, but before it is accepted as forensic evidence in any court, there need to be more trials.

It’s possible to develop the test for other animals, although it will require time to establish baselines for each species’ isotope values, according to Dingle. This requires collecting many samples from both wild and captive animals, which can take several years.

“It took about five years for us to get enough wild cockatoo samples,” said Astrid Andersson, the other co-lead author of the study and a postgraduate researcher at Hong Kong University. “And they’re right in the center of Hong Kong … it wasn’t that hard, not as hard as going to find them in the wild.”

In Hong Kong, feathers from wild birds can be collected from the ground, and those from captive birds can be obtained from willing pet owners. For something like tigers, Andersson said, it would be far more difficult to collect enough wild tissue samples to build a baseline picture of their diet.

But given enough samples, from both wild and captive animals, researchers can develop a robust stable isotope analysis for theoretically any animal, as long as the wild and captive diets are sufficiently different. Animals whose diets change seasonally pose a slight challenge, but a baseline of the isotope values can still be established with enough testing.

The tool even works with humans. Dingle noted that a professor at Hong Kong University performed an isotope analysis on himself when he was in the United States and again when he was back in Hong Kong, and there was a clear difference. In the U.S., he had a very corn-based isotope profile, while in Hong Kong, his isotopic values changed to reflect a rice-based diet.

Besides pushing for the development of this forensic tool, Dingle said she’d like to see owners of rare or exotic pets educate themselves on where the animals come from.

“We surveyed pet owners, and a lot of people aren’t really aware that a species that they own are threatened somewhere else. And that there’s a potential that by buying a pet bird or pet frog or lizard, that you could be contributing to that decline,” she said. “There’s just a disconnect, people think that it came from a pet shop so it’s bred just like a dog or a cat.”

With stable isotope analysis not yet available for pet owners or prospective buyers to verify the provenance of their animals, Dingle suggests just asking for paperwork from the seller. In their survey of pet owners, Dingle and Andersson found most owners aren’t even aware that paperwork exists to confirm an animal has been raised in captivity.

“The [Hong Kong] government is looking for support and ways to deter [animal trafficking] from happening in the city, and I’m sure in other parts of the world it’s the same,” Andersson said. “This tool can be part of that solution.”