The poachers had killed 29 dik-diks. However, the driver of the trailer escaped into the bushes, leaving intelligence officers stressed out as they watched evidence disappear into the thickets, and this, they knew, would weaken prosecution in court.

As the Internet becomes more available across the globe, the black market for ivory, bush meat, animal skins and bones has gone online. And this boosts concealment of the crime. 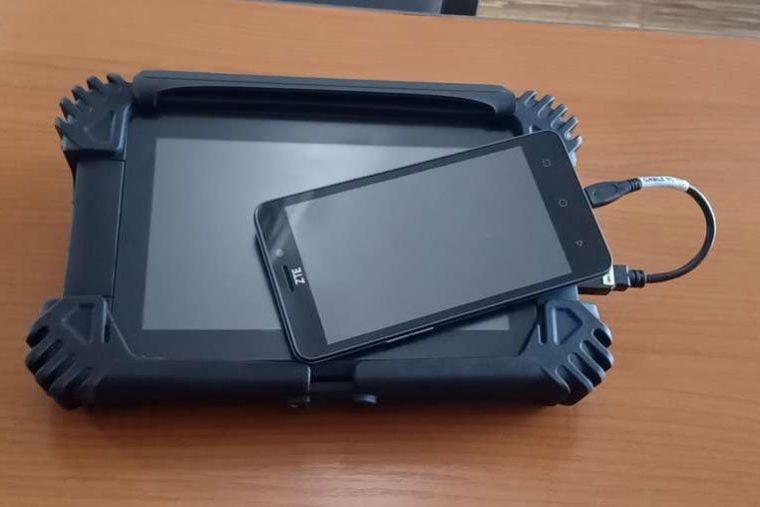 Original image as posted by The Daily Nation

Puzzled by these trends, AWF has partnered with Irdeto, an international tech company for wildlife law enforcement for a forensic tool to unmask these killers and traders.

Ernest Agina, AWF’s cybercrime investigation manager, says the forensic tool can decode data from devices collected from arrested suspects, with consistent information being presented in court for prosecution. “This device can acquire all the data from any mobile phone, camera, drone, smart watch or even the cloud. Detectives can comb through call records, photo and video gallery of the suspect, check transaction records and access browsing history and chats, looking for evidence,” he expounds. “Some suspects give access to their phones voluntarily, but when they fail to co-operate with investigators, the device can decrypt the phone.

An investigator can search for keywords such as meat, ivory, leopard skin or rhino horns in the suspect’s device, maintaining data privacy of the suspect and present them to court. Forms of electronic evidence analysed by the tool, that costs up to Sh2.5 million, include voice, SMS and online communication to existing wildlife black markets, photos and videos. Time and geolocation data is also used to help in linking analysis and forensic triangulation.

“KWS officers have been using it since 2018 with a number of successful cases, with the assistance of officers from the Directorate of Criminal Investigations (DCI), but the big hurdle is certification. The officer using the device to extract evidence from a suspect’s mobile phone must be certified,” says Wamukoya.

AWF, therefore, came to bridge this gap. It has embarked on training of KWS officers to ensure those who commit wildlife crime in the cyber space are prosecuted.

When KWS officers are trained to be certified users of the device, they can give evidence in court for illegal wildlife trade cases that are perpetrated online.

This innovation, Ms Wamukoya says, came along after Kenya amended the Evidence Act, allowing the admissibility of electronic evidence in court.

“World over, prosecution of poaching cases has been struggling with admissible evidence in court. We are also planning to sensitise prosecutors, lawyers, investigators and magistrates in Kenya on how evidence from this forensic device can resolve wildlife crime cases,” she says.

“Because of the sensitivity of security in this field, we train a few officers who will be resourceful in the KWS.”