By NewsroomNovember 14, 2019Anti-poaching
No Comments

This is the 25th award for the filmmakers of STROOP, Susan Scott and Bonné de Bod. An emotional de Bod stated last night that “the film has won so many international awards which is wonderful of course! But it’s very important to be recognized back home.

“This is a very prestigious award, and has been given out by SAB for over thirty years, so to have the focus put squarely on rhino poaching, considering all the environmental issues out there, is just vital and I’m very pleased about that.”

One of the film’s ‘characters’, Karen Trendler, was also honoured with the Nick Steele Memorial Award for Environmentalist of the Year – the top nod at the award ceremony. 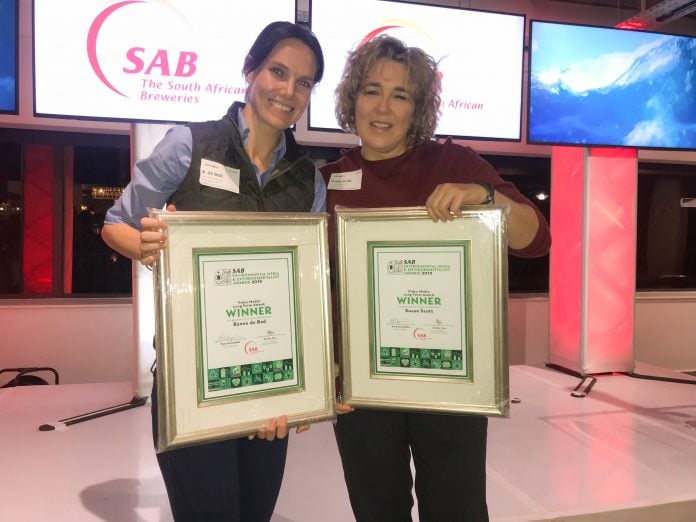 “How wonderful that Karen has been recognized for her 30 years of service to caring for and rewilding wild animals!” Scott went on to say that world famous wildlife rehabilitator Trendler, shared this with notable environmentalists who have made meaningful impact in their fields like the UN Patron for the Oceans, Lewis Pugh and lion advocate Gareth Patterson.

This is the first cash award that the filmmakers have won for the film and Scott says they are choosing to share it with their mothers who they moved in with during the four years of filming on STROOP.

The Awards, now in their third decade, aim to recognize South African journalists who have excelled at reporting on, and creating awareness of, environmental issues across print, electronic and digital media. MC of the event, Bongani Bingwa said it was a unanimous decision by the judges for the hard-hitting South African film that has ignited world-wide interest in rhino poaching and has screened at numerous film festivals as well as on tv-channels around the globe.

If you’re in South Africa, or several countries around the world – you can screen STROOP here.