By NewsroomFebruary 23, 2022Conservation, Tourism
No Comments 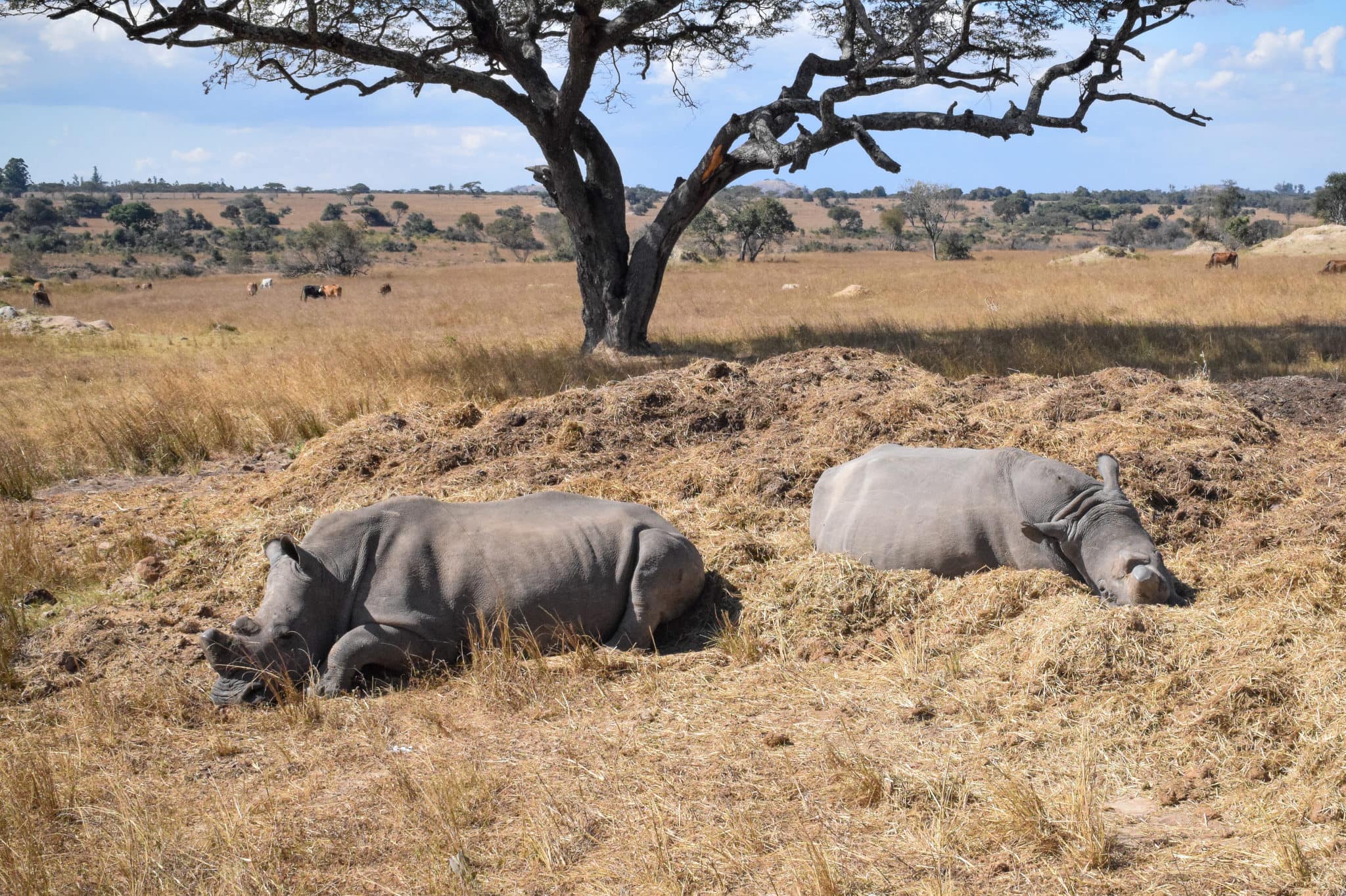 To deter poachers, conservationists sometimes dehorn rhinos like these in the Imire Rhino and Wildlife Conservation park in Wedza, Zimbabwe. Image: As originally published by GPJ.

The coronavirus pandemic has been devastating to humans. But to Zimbabwe’s black rhinos, it’s been a godsend.

Rhinos have no natural predators; humans are their greatest threat. Poachers kill rhinos to harvest their horns, which they smuggle to black markets in Asia for use in traditional medicine. But international travel restrictions to stop the spread of the coronavirus — though crippling to Zimbabwe’s tourism sector — have significantly aided conservation of the country’s black rhinos, which officials designated as critically endangered in 2012.

The species saw a rare population boom in 2020, says Christopher Whitlatch, the communications director of the International Rhino Foundation, which is involved in the conservation of all five rhino species. In southern Zimbabwe’s Bubye Valley, for example, which lost 71 rhinos to poachers during the two years preceding the pandemic, the population increased nearly 14% during the first half of 2020.

The poaching of Zimbabwe’s black rhinos reached its peak in 2019 and was beginning to decline due to increased anti-poaching measures, Whitlatch says. Coronavirus restrictions acted as a catalyst.

Tinashe Farawo, the public relations manager at the Zimbabwe Parks and Wildlife Management Authority, says until 2019 poachers were killing rhinos nearly every day. Authorities have had more than 10 armed confrontations in the past five years, Farawo says, some of which led to the deaths of rangers and suspected poachers. Then, in 2020, nearly all poaching stopped.

International travel bans during the early days of the pandemic meant traffickers were unable to move rhino horn to markets, Whitlatch says. That cut down on poachers but also led to a decline in tourism funds. “The burden was placed on rangers, parks and conservancy staff,” he says. “There was trouble replacing equipment, and salaries were cut.”

When the movement restrictions forced them to stay in place, rangers and other conservation staff decided to continue working. To temporarily offset lost tourism revenue, the rhino foundation created the Reserve Relief Fund.

With about 1,000 animals, Zimbabwe has the fourth-largest population of black rhinos in the world, after South Africa, Namibia and Kenya.

The black rhino population boom in Zimbabwe is a bright spot amid myriad lockdowns that hurt conservation efforts worldwide, according to research published in the journal Biological Conservation. Uganda’s protected Bugoma Forest saw an increase in the use of snares, which can kill or injure unintended animals like endangered chimpanzees. And India reported a 500% spike in seizures of pangolins from people trafficking them for food and medicine.

Farawo, of the Parks and Wildlife Management Authority, says officials knew some people might see the absence of tourists in parks as an opportunity to engage in illegal activities. “When there are normal tourism activities, people can easily identify suspicious activities and alert the authorities,” he says.

The absence of that vital source of intelligence meant rangers had to work harder than normal, Farawo says. They put protection mechanisms in place, including watching and defending the rhinos around-the-clock, moving herds to more secure areas and in some extreme cases dehorning rhinos so poachers have no interest in killing them.

Black rhino populations in Africa fell drastically during the last century due to European hunters and settlers, according to the World Wildlife Fund. Between 1960 and 1995, experts estimate that the number of black rhinos declined by 98%, to fewer than 2,500. Due to increased conservation efforts, around 5,600 now exist. Poaching continues to endanger the animals’ existence.

Raoul du Toit, a Zimbabwean environmentalist and director of the Lowveld Rhino Trust, says the country has experienced several surges in black rhino poaching over the years. The most devastating was in the late 1980s and early 1990s, when poachers nearly decimated the black rhino population in the Zambezi Valley, which in the early 1980s had Africa’s largest rhino population.

To save the few survivors, the government and conservationists relocated them to former cattle ranches that had become unprofitable due to persistent droughts in southern Zimbabwe. Around 90% of Zimbabwe’s black rhinos live on such conservancies. Only now, the species faces a very different threat than that posed by European hunters during the 20th century.

“A flare-up of demand for rhino horn in Asia has created the perfect storm,” du Toit says.

Unproven medical claims in some southeast Asian countries that, when consumed in powder form, rhino horn can heal a variety of ailments, including cancer, drive the demand, he says. A kilo of rhino horn can sell for as much as $60,000 in the Asian black market.

But Whitlatch now sees a future for Zimbabwe’s black rhinos. Officials have assembled teams to monitor them and collect data to help determine the species’ overall health. They’ve also deployed electronic tracking in some areas to provide real-time monitoring.

“It has not been easy, but it’s a success story,” Whitlatch says. “Zimbabwe is a model of light to show what can be done to save rhinos.”