By NewsroomMarch 2, 2021Wildlife Trade
No Comments 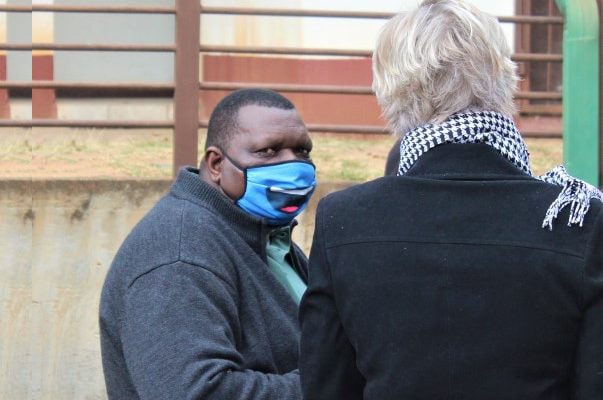 Joseph “Big Joe” Nyalungu at his latest court appearance. Image as originally published by the Lowvelder.

More than a decade after Joseph “Big Joe” Nyalungu’s first arrest in February 2010, he is still a free man.

The charges over the years include murder, kidnapping, theft of seven white rhino horns from the Kruger National Park (KNP), using a motor vehicle without the owner’s consent, fraud, obstruction of justice, possession of unlicensed firearms and being in possession of stolen property.

Charges of the kidnapping and murder of Willey Shipalane led to Big Joe’s most recent court appearance on February 22 in the Nelspruit Regional Court. With him were his co-accused, Elvis Mlimi and Selby Nyalungu, Big Joe’s brother.

Big Joe and Mlimi were first arrested on these charges in February 2010. After this first arrest, the docket was eventually removed from the roll due to an incomplete investigation.

Since the case has been handed over to the new investigating officer, more evidence has been added. This includes extra photos from the Public Criminal Record Centre as well as notes from the doctor who had performed an autopsy on the victim’s body, and his post-mortem report.

Big Joe and Mlimi had appeared several times since their arrest on July 21 last year. Selby was only recently added as a third accused after handing himself over to the police. They are all currently out on R1 000 bail each.

The case has been postponed and trial is set to start on April 12.

Nyalungu, a former warrant officer in the SAPS, was arrested in 2011 with a colleague after having been found in possession of more than R3 million. It was testified in court that a bag found with them contained the DNA of a rhino poached in the KNP.

In an undercover police operation in 2012, rhino horns had allegedly been sold to Nyalungu, and then later turned up in an arrest of a Vietnamese national, Ngoc Cuong Pham, who was in possession of 10 rhino horns.

They appeared a few times and in June 2015 before administrative disaster struck when the police forgot to transport some of the accused to Mhala Magistrate’s Court. This caused another postponement.

Enter a new case in September 2018 when Nyalungu appeared in the White River Magistrate’s Court alongside Petros Sydney Mabuza.

The pair was charged with the theft of seven white rhino horns from the KNP. They were also charged with using a motor vehicle without consent of the owner, fraud, obstruction of justice, possession of unlicensed firearms and being in possession of stolen property.

At that stage, Lowvelder had reported that the previously mentioned trial had been postponed more than 10 times without having begun.